Nizhnekamsk is updating the heat supply scheme until 2034. Public hearings on the topic were held yesterday in the House of the Soviets of the city. More than 290 people came to discuss the issue. The results satisfied almost all participants despite large-scale involvement. Read the details in the material of Realnoe Vremya.

The Executive Committee of Nizhnekamsk has brought to public discussion a new version of the heat supply scheme of the city. In fairness, unlike Kazan, the public hearings were held in a much more open format. Deputies of the Nizhnekamsk City Council, deputy heads of the executive committee of the district, heads of departments, heads of industrial enterprises and residents of the city gathered in the big hall of the House of the Soviets — 292 people registered in total.

The current supply scheme of the city was approved in 2013. Each year, the document is updated in the part of the heat load distribution between thermal energy sources, the redistribution of heat load from one coverage zone to another, load switching from boiler houses at CHP, the measures for boiler houses' re-equipment, the construction and reconstruction of heat networks. This year, in addition to the standard revision, the scheme is approved for 15 years — until 2034. Head of the Executive Committee of Nizhnekamsk Denis Balandin presided at the meeting. He said that in December 2018 the Executive Committee of Nizhnekamsk turned to the largest supplier of thermal energy in the city, Tatenergo JSC, requesting to provide financial support to update the heat supply scheme. Tatenergo issued the tender, the winner of which was VID-Energo engineering company. In addition, a working group was formed for the development, which included representatives of the department of construction and architecture of the Executive Committee of the city, the heat supply and heating network organizations, the largest industrial consumers, as well as the developer of the scheme. All proposals were accepted until March 1. On March 12, the project was placed on the official website of Nizhnekamsk district, as well as in Nizhnekamskaya Pravda newspaper.

Chief Engineer of VID-Energo Vladimir Ageev came to defend the project in front of the audience.

''The heat supply scheme is the main document of the city in terms of ensuring reliable and high-quality heat supply. The project was developed on the basis of the contract between VID-Energo and Tatenergo. All comments were discussed at the meetings of the working group. Out of these, 20 were accepted, 2 partially accepted and 6 rejected,'' he reported.

Thermal load is reducing due to pace of housing commissioning

Today, there are several heat supply organizations in Nizhnekamsk. They are Nizhnekamsk CHPP (PTK-1) owned by TGC-16 and Nizhnekamsk CHPP (PTK-2) owned by Tatneft. Nizhnekamskie Seti, a branch of Tatenergo, and the Water-and-sewage and Power System Management (VKiEH) are engaged in supplies and transportation of thermal energy. In addition, the Unified Tariff Body (ETO) of the industrial zone operates in the city, such as Nizhnekamskneftekhim, TANECO and Energoshinservis. According to Ageev, if the current scheme involved a faster rate of commissioning (3-4 years), then the updated one increased the period of housing commissioning threefold (up to 15 years). As a result, the city does not need so great heat load

The difference between the discussed scheme from the previous one is that the thermal load on the city is reduced. First of all, it is connected with reduced rates of housing commissioning by developers. According to Ageev, if the current scheme involved a faster rate of commissioning (3-4 years), then the updated one increased the period of housing commissioning threefold (up to 15 years). As a result, the city does not need so great heat load.

Also, Vladimir Ageev noted that the forecast of steam supply increased in the scheme concerning Nizhnekamsk CHPP (PTK-1), according to the practical indicators of 2018. The forecast for PTK-2 has also increased. As for Tatenergo, the increase did not become large-scale due to the pace of housing construction.

The total demand for investments of heat supply sources of Nizhnekamsk is almost 13 billion rubles.

''The most part (almost 10 billion rubles) is required in the project on arrangement of boilers of petroleum coke burning at PTK-2 and will be financed from non-tariff sources of the station,'' Ageev explained.

The need for investments in heating networks is estimated at 7 billion rubles. At the same time, about 5 billion rubles will be allocated for the reconstruction of heat pipelines of Tatenergo. In addition, it is expected to reduce the tariff of TGC-16 for the second half of 2019 due to gross revenue settlement. Tatenergo has not changed the rate.

The percentage of heat loss through networks is growing

Then the word passed to the representatives of the industry. Deputy Director General of TGC-16 JSC on Economics and Finance Dinara Gilmutdinova commented on the project. She said that the proposals of TGC-16 to maintain parity loads between PTK-1 and PTK-2 had been taken into account. At the same time, the company asks to finalize the scheme in terms of the volume of steam release from Nizhnekamsk CHPP-1. ''This volume is declared at the level of last year. Last year, the figure was maximum. But for the l quarter of 2019, we are seeing a decrease in these volumes,'' Dinara Gilmutdinova addressed to the developers. According to her, the reduction due to the upcoming launch of the HRCC at TAIF-NK, which is now finalizing the commissioning works. After the launch, the plant will act as an independent heat source.''

Also, TGC-16 has a question on heat losses.

''The draft scheme notes that the percentage of losses through networks is growing. If earlier they were approved at the level of 19,6 per cent, now they are set at 21 per cent. We believe that the trend should go downwards. Please pay attention to it,'' Dinara Gilmutdinova told. Pavel Sushkov, the deputy chief power engineer of Nizhnekamskneftekhim, agreed with the arguments of the representative of TGC-16

Pavel Sushkov, the deputy chief power engineer of Nizhnekamskneftekhim, agreed with the arguments of the representative of TGC-16.

''We support TGC-16 in this matter. We would like to note, with regard to Nizhnekamskneftekhim, all proposals have been taken into account,'' he turned to the audience.

''Why haven't the wishes of the station in terms of redistribution of loads between us and CHP-1 in the scheme taken into account?'' he asked the developers. 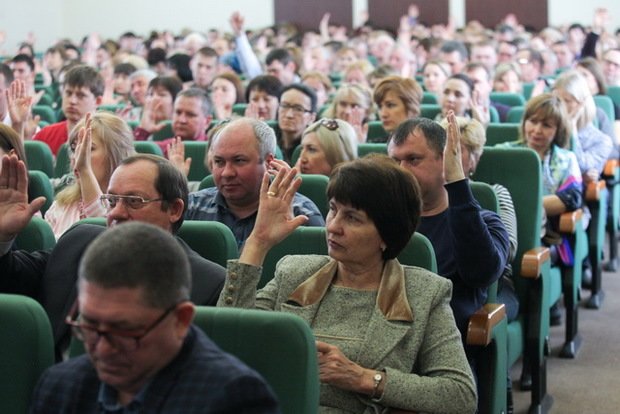 ''The decision to revise the historically formed distribution has been left until the next update. We want to see how the tariffs at the stations will change. We expect a rate decrease from TGC-16,'' replied Vladimir Ageev.

At the end, the hearings were recognized as completed. The Executive Committee instructed VID-Energo to refine the scheme and to submit the final draft until 12 April.