Boris Kagarlitsky: ''The reform has been provoked by anything but a crisis in the pension system''

The political expert about the pension reform, protests and Rustem Khamitov

The State Duma adopted the bill on the retirement age increase in the first reading. Such a legislative initiative caused protests across the country when it was just discussed. Representatives of the leftists were the initiators of mass campaigns. At the same time, the reform enables to wake the people up, thinks sociologist and dissident Boris Kagarlitsky. In an interview with Realnoe Vremya's reviewer, the expert told about pitfalls of the reform and shared his opinion about protests in Kazan, Ufa and other cities. Our interlocutor also assessed Rustem Khamitov's chances to remain at the wheel in Bashkiria.

Mr Kagarlitsky, protests against the pension reform are taking place in different cities. Is only the retirement age increase the problem?

It goes without saying that the burst of discontent has been caused not only by an attempt to increase the retirement age. It's likely the discontent for the last 5-6 years has accumulated, but, most importantly, there is a realisation of the real situation we are all in. Most part of the people was in a kind of dream. They still dreamed they were living in the 2000s, that nothing radically changed after the crisis. And if something happened, it was temporary, it would pass. And everything would be as it was. But something that has shown it won't happen here. It will never happen. And power we considered at least partly ours is our rival, threat, danger.

The pension reform had a powerful effect of wake-up. It's its historical role. But we should understand it's not acceptable, in fact, concerning its content. Power isn't simply lying, it's lying saying what people perfectly know first-hand. And this discredits not only the propaganda but also propagandists and their employers. In other words, the crisis around the new initiative of the government has brought us to a new political situation, even a new political reality.

How did it happen that the money box of the Pension Fund where the money earned by citizens accumulated has suddenly become empty?

There is money. The National Wealth Fund, which, according to its charter, is to finance the Pension Fund's deficit, is equal to some 5 trillion rubles, moreover, it grows. In addition, the projected budget surplus is about 1,5 billion rubles. Considering the deficit of the Pension Fund at 200 billion a year on average, we have accumulated enough money for the next 20 years. But power prefers to withdraw money from the economy. 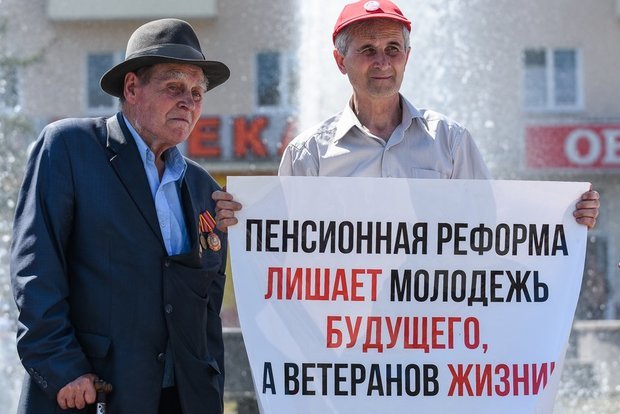 ''Power isn't simply lying, it's lying saying that people perfectly know first-hand. And this discredits not only the propaganda but also propagandists and their employers.'' Photo: Oleg Tikhonov

There is a suspicion that there has been robbed much more than we think. In any case, there is a question ''where is the money?'' Where does the money withdrawn by the government (I emphasise, right the government, not only oligarchs) from the country go? What unofficial obligations have Medvedev's cabinet and Putin's team given and to whom? If these questions aren't asked, everything becomes absurd. But, as Sherlock Holmes said, if people's actions seem senseless, it means there is something we don't know.

The main thing we need to understand is that the reform has been provoked by anything but a crisis in the pension system. It doesn't mean our pension system is fine, but its problems have nothing to do with the citizens' retirement age. And when we're said like they want to extend workable age due to a longer lifespan, they pretend as if nobody knew our pension legislation. Now you can work even until you're 100. Nobody prohibits you. You will just receive a small pension (old-age benefit, in fact) after 55 or 60 and some valuable privileges. It's the benefit and privileges they want to take away from us. About 40% of pensioners work in Russia. They work legally! In addition, they continue adding their payments to the Pension Fund. In other words, one in two pensioners in Russia maintains himself. Where does the deficit of the Pension Fund come from?

In Tatarstan, CPRF offered to postpone the pension reform to 2030. A contradiction is felt. Does it mean the communists have finally agreed with power?

The top of the CRPF is protesting, on the one hand. But, on the other hand, it is also sabotaging the protest. It's enough to mention the requirement to hold a referendum. Instead of trying to revoke the bill under pressure of mass popular speeches, they create a procedural red tape, which won't bring to anything beforehand because power won't agree any way. What if the pressure of masses will be so strong that make power take a step back, why is a referendum needed? The law won't be introduced then.

Why didn't power approve these protests but gave the green light some time later? And they were quite active in Tatarstan, Bashkortostan and other regions.

Every region has its own reasons. But I think there are two factors. Firstly, they start to be afraid of mass illegal speeches that can't be stopped by prohibitions. If there is agreement, there is at least some control. Secondly, regional power isn't thrilled about the bill, though they prefer to keep silent.

By the way, will you participate in such a campaign too?

There is a variety of campaigns ahead. The fight just begins. And, of course, I must participate in it. I'm the head of Civic Solidarity. It's we who initiated and held a protest in Moscow on 18 July, though everyone said nothing would work, while the Labour Confederation of Russian even revoked its application. But it's evident the problem isn't solved with one or even several protests. A full-scale political campaign must be run. And we will do it. We won't be afraid and take a step back. ''There is a variety of campaigns ahead. The fight just begins. And, of course, I must participate in it.'' Photo: Maksim Platonov

Why has representatives of liberals (Yabloko, Navalnists and others) also supported the leftist being against the retirement age increase?

The liberal opposition and Aleksey Navalny have a deficit of popular topics and ideas except corruption, of course. But they've used this topic to the max. The pension protest is leftist by its content, it's a topic of social rights and social country. But all non-leftist opposition has to join, otherwise, it will be thrown overboard of the process.

Power allude to foreign experience: in developing countries, people retire much later than in Russia. Is our government using all means to fill the pension gap?

Firstly, the pension system in the West is completely different. One can't work and receive a pension there. In Russia, one not only can work, but, most importantly, right pension allows older workers to keep working. They wouldn't live on their small salaries without pension, while not everyone is able to work additionally, skip and earn at 60-65 years.

Secondly, the retirement age increase in the West caused protests and strikes compared to which our protests seem child's play. And, thirdly, many governments had to take a step back. France corrected the reform, Poland simply cancelled it and lowered the retirement age again. Television says nothing about it, of course…

Why does Putin keep at a distance from this topic?

I'm sure precisely Putin is a supporter of a stricter behaviour of the neoliberal course – the retirement age increase, the rise in VAT, etc. But according to my data, it's the government that fluctuates, while the president's administration promotes the strictest, inhumane version. It's clear, however, that Putin whose should depict a ''kind policeman'' for his role can't openly support the government's initiative. And he won't be against the policy he pursues. He can just keep silent and hide. ''I'm sure precisely Putin is a supporter of a stricter behaviour of the neoliberal course – the retirement age increase, the rise in VAT, etc.'' Photo: kremlin.ru

The mass media write a new wave of dismissal of governors is expected in autumn to distract the attention from the pension reform. Will it help?

I don't think. On the contrary, I think it will worsen the political crisis and disorganise the system more.

Rustem Khamitov is among the governors who are predicted to be dismissed. What does he do wrongly in Bashkiria? What are the chances he will remain in power?

Khamitov is considered a weak leader. Moreover, in Bashkiria where people got used to another power. But he stays strong so far. It's easy to dismiss Khamitov. But it's more complicated to take control of the situation after it. Perhaps this is why he is in his place now. 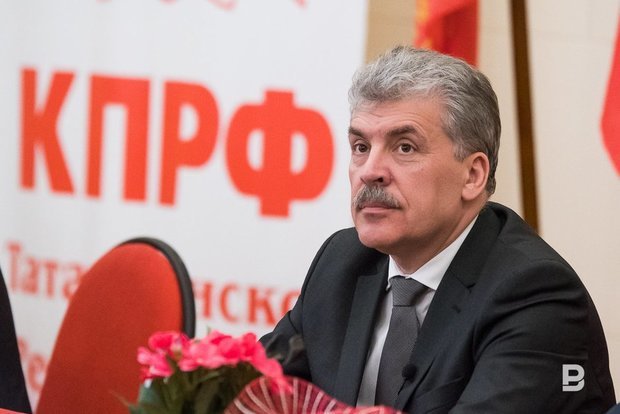 ''Grudinin met his obligations in front of authorities and CRPF officials, absolutely honestly and scrupulously. In this respect, there can't be complaints about him. And he doesn't deal with politics or public fight. It's not his business.'' Photo: Maksim Platonov

The presidential election is behind. It's not heard anything about Pavel Grudinin. Where is he?

Grudinin isn't a politician and a candidate for the presidency. He was just offered to feature a candidate for the presidency for several months. He did it honestly, it seems without special pleasure. But if he agreed, he did it. Do you remember the phrase ''merchant's word'' in Aleksandr Ostrovsky's Without a Dowry? So Grudinin met his obligations in front of authorities and CRPF officials, absolutely honestly and scrupulously. In this respect, there can't be complaints about him. And he doesn't deal with politics or public fight. It's not his business. He deals with realty and strawberry cultivation. And, by the way, he does it quite well.