Тоуо about business with TAIF: ''We constructed a methanol plant in Oman, it’s the first project in Russia''

TAIF Group of Companies and Toyo Engineering Corporation, which is part of Mitsui Group financial and industrial holding, have had long and trusting relations. The Japanese company took part in the design and supply of equipment for the Heavy Residues High Conversion Complex at TAIF-NK PJSC. Its technologies were used in the construction of the fourth stage of the polystyrene plant at Nizhnekamskneftekhim. A new joint project of TAIF and Toyo is also linked with NKNKH: the company plans to participate in the isoprene rubber plant's modernisation. Realnoe Vremya tells the details of the companies' cooperation.

In early October, Tatarstan President Rustam Minnikhanov was back from the Land of the Rising Sun where he took part in Tatarstan – Japan business forum in Kanazawa. Then the president claimed the Republic of Tatarstan was ready to expand cooperation with business representatives of Japan. Among fulfilled projects with Japanese companies, Rustam Minnikhanov mentioned the cooperation of Mitsui Group and Toyo Engineering Corporation with TAIF Group of Companies. 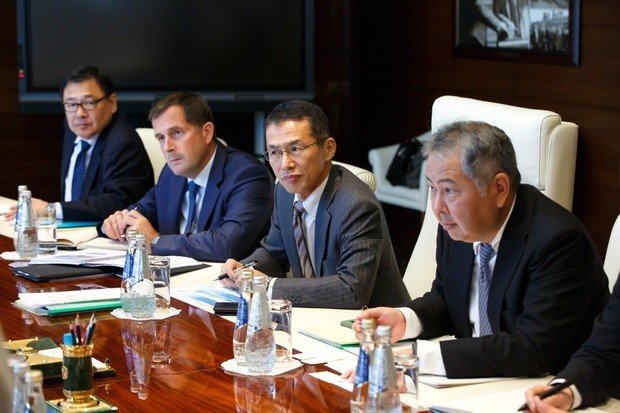 It should be reminded that Toyo Engineering took part in the design and supply of equipment for the Heavy Residues High Conversion Complex at TAIF-NK PJSC. The Japanese company also cooperated with Nizhnekamskneftekhim PJSC when constructing the fourth stage of the polystyrene plant, Toyo created the detailed design of the polycarbonate plant at Kazanorgsintez.

NKNKH plans to produce methanol from its own resources

It was decided to continue the time-honoured cooperation. Toyo will pay out a technical and commercial offer for methanol producing equipment within isoprene rubber plant modernisation at NKNKH. ''We need to optimise isoprene rubber production costs. We plan to fulfil the project in the short run. Having studied cooperation terms, we concluded you have huge experience in methanol plant projects (Editor's Note: used to make isoprene rubber),'' Albert Shigabutdinov claimed during the talk. At least six companies constructing methanol manufacturing plants are taking part in the tender.

Senior Executive Officer at Toyo Engineering Corporation Eiji Hosoi thanked the officials of TAIF PJSC for the trust and expressed their readiness to cooperate in new projects of NKNKH concerning the isoprene rubber plant's modernisation. The sides also discussed the project's deadline during the talk.

The project's deadline was also discussed during the talk

TAIF was content with the meeting, the partners managed to find common points on issues that are important for both sides. Albert Shigabutdinov told journalists that technical novelties the company's specialists possessed could be applied in the methanol plant's project, which will allow to arrange methanol production from resources Nizhnekamskneftekhim owns,'' Albert Shigabutdinov specified. He also noted that TAIF Group of Companies and especially Nizhnekamskneftekhim worked within strict competition in the world and in Russia.

Nizhnekamskneftekhim PJSC Director General Azat Bikmurzin who also took part in the talk with Toyo, claimed the work with Japanese enterprises was ''constructive, the company worked openly and focused on the outcome.''

''There are many projects with TAIF we consider successful'' Mr Hosoi, Toyo Engineering Corporation has been lastingly cooperating with TAIF Group of Companies. Which of the joint projects do you consider the most successful?

There are many projects we consider successful. For instance, the cooperation with NKNKH in an ethylene project, which was implemented quite a long time ago in the Soviet Union. We also worked with TAIF in the construction of the fourth stage of the polystyrene factory at Nizhnekamskneftekhim. Both are memorable projects.

What a joint project together with TAIF Group of Companies have you discussed today? What have you managed to agree on?

What's the advantage of working with Toyo Engineering Corporation?

Why are Japanese companies interested in the Tatarstan and Russian market?

Like the Japanese side, people in Tatarstan like to work with each other. We like the working environment created for foreign companies, it's comfortable to work in Russia. In Tatarstan, we also cooperate in several projects with Kazanorgsintez PJSC.

Toyo Engineering Corporation was founded in 1961, it's part of Mitsui GC. The company has been constructing oil refining units, ethylene units and complexes to produce mineral fertilisers in the Soviet Union first then in Russia and CIS countries for 50 years. In recent time, Toyo Engineering Corporation has fulfilled big projects in Tatarstan and Turkmenistan (gas and chemical complex's project). The company has erected 45 ethylene plants of different capacity around the world since 1966 (a plant a year on average).