Hammam, snow banya, Bolgarian, Russian… Six types of banyas in Bolgar under one roof, or Enjoy your steam!

A spa complex is being built at the new hotel building in the ancient city of Bolgar, where, as Shaimiev instructed, first to go will be the board of Revival Fund

Bolgar is preparing to commission the hotel complex Kul Gali this month. As Realnoe Vremya found out, the hotel has already have a spa complex, which has six types of banyas: from an analogue of one that was in the White Chamber of the ancient city, to the Turkish hammam, traditional, snow baths and others. In short, even the most sophisticated fans of steam will be pleased here. More information about the construction of the complex and the first guests — read in the material of Realnoe Vremya.

The construction of the hotel complex Kul Gali in Veliky Bolgar is nearing completion. The construction began in 2015, and although the work was advancing at a rapid pace the commissioning date had to be postponed several times.

They used the experience of Eastern countries, close to Bolgar in culture and where the hotel business is developed, for example, the UAE, when designing the complex. But the designers were interested not in modern hotel complexes, but in hotels related to the historical theme. The most difficult thing for the construction of Kul Gali was to find qualified specialists who would be ready to move to Veliky Bolgar for a while. As Tatyana Larionova told, they plan to commission the hotel this month. Photo: Oleg Tikhonov

The spa complex was commissioned the first, where one can rest in the banya similar to the White Chamber of the XIV century. Here it is worth recalling the history of the appearance of this object — the corresponding order was given by State Adviser of Tatarstan Mintimer Shaimiev at a meeting of the board of Revival Fund last March:

''I think that at the end of next year we will invite the members of the Board of Trustees to Bolgar for hammam. Women's days will be held separately, men's — separately. To feel these traditions: Roman-Greek, Tatar and Bolgarian. Everything will be presented — just like in the White Chamber. Just yesterday I read about the history of hammam. There is so much wealth in the world! Nogmanov wrote about hammam in a material for Realnoe Vremya. I read the newspaper at night and go to work in the morning. Well, aged 80 it happens, apparently,'' smiled Mintimer Shaimiev.

According to the state adviser, the reconstruction of the hammam in Bolgar will improve the level of hotel services. This is an important object of the complex, so the builders were not in vain in a hurry: ''An outstanding place, beautiful. Many will be willing to go, visit, see. All these conditions are created thanks to Tatneft and TAIF,'' Shaimiev thanked the investors. Dictum-factum: the spa complex was built in Bolgar based on the experience of different countries. 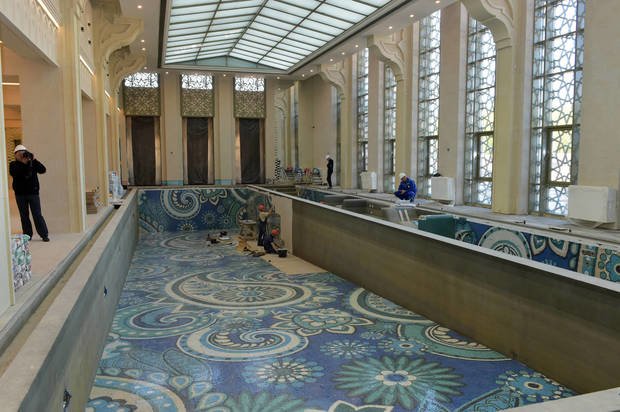 According to Mintimer Shaimiev, the reconstruction of the hammam in Bolgar will improve the level of hotel service. Photo: shaimiev.tatarstan.ru

''The spa complex was built the first. We used our history in its contsruction. Fortunately, out historians and archaeologists have a huge amount of works about Bolgar. So, first of all, we relied on the historical materials. Earlier, we had caravansarai — it is the same hotel. Moreover, in Bolgar there is a small town — it is just a place that was a quarantine building. In order to get directly to the settlement, they were accomadated here first, then passed sanitary control and so on. It was a kind of hotel. That is, first of all, we studied the history of Bolgar first,'' the director of Revival Fund shared.

Tatiana Larionova, Deputy Chairperson of the Tatarstan State Council, told that several pleasant surprises await visitors of the spa complex. There will be six types of banyas and one hammam, which was built using the experience of the old hammam in Istanbul. Such a variety of banyas is reasoned by the desire to please different groups of customers.

''After all, we understand that there will come people who want more modern traditional banya, not necessarily Eastern culture. Even Russian banya is supposed to be here. We also looked at the experience of Germany — how spa complexes are developed there, so that it worked on the health of people who come here. Perhaps, much has been borrowed, but, nevertheless, we did not depart from the traditions of Bolgar,'' said the interlocutor of the publication.

Among other types of banyas, there will be even snow one. In addition, one of them will have a map of the settlement. However, the president of the fund did not disclose all these secrets: ''I have not travelled around the world, I am not spoiled by visiting some hotels, but what I see in Bolgar causes one desire — as soon as possible to experience it as a guest of the hotel.'' One of the banyas has a map of the settlement. Photo: shaimiev.tatarstan.ru

Restaurant without a brand yet

According to the plan, there will be a restaurant in the hotel. However, local restaurateurs are being in no hurry to open another institution in the landmark place for Tatarstan.

''In general, it is interesting and attractive, but given that it is still far enough from Kazan, there is still no anyone who would say ''we will open here'', unfortunately. Although the conditions are being considered by many,'' Tatiana Larionova says.

The cost of works on creation of the hotel complex was not announced, but it was reported that the costs have already amounted to about 1 billion rubles. The main sponsors are TAIF PSC and Tatneft PJSC, the engineering networks were provided by Gazprom Transgaz Kazan PLC and Grid Company JSC. It is difficult to calculate how much money TAIF allocated for the creation of the hotel because it is the Republican Fund Revival that distributed the funding between the objects. In 2017 alone, the group of companies allocated 1,4 billion rubles to the organization to finance restoration and construction works in Bolgar (including the hotel, Islamic Academy), as well as the Cathedral of the Kazan Icon of the Mother of God. Since 2012, TAIF has allocated more than 2,8 billion rubles for these purposes in total.