''Unmanned vehicles — a bifurcation point for the industry''

Experts about an automotive market growth, future stagnation and cars-smartphones

For three days Kazan has turned into a meeting place to discuss the development of the automotive market. In addition to participation in the sessions, Tatarstan International Automotive Forum (TIAF) as usual has become a platform for companies to meet potential partners and for the second time — with counterparts from China. About how market participants diagnosed a recovery and subsequent illness in the domestic industry and how they placed hopes on unmanned vehicles — read in the material of Realnoe Vremya.

Without VIPs, but with guests from China

Kazan Fair for the fourth time has become the platform for Tatarstan International Automotive Forum (TIAF), organized with the support of the leading exhibition brand in the field of auto parts, components and equipment for car service Automechanika. The forum is held from 28 March to 30 March. Among the organizers of the event there are the Association of European Business (AEB), the Ministry of Industry and Trade of the Republic of Tatarstan, the Russian representative office of Messe Frankfurt GmbH and Kazan Fair JSC. In addition to the exhibition of achievements of the domestic automotive industry and automotive components, it is planned to visit production sites and, most importantly, to organize individual meetings with possible future partners.

For the second consecutive year, the organizers have actively cooperated with manufacturers of automotive components from China, who were located in a separate pavilion. However, in the morning of the opening day, the exhibitions from the Chinese province of Zhejiang did not cause a special interest of the companies — the guests from China with a bored look were drinking tea with sweets from their stands and waiting for visitors.

Initially, the opening agenda of the forum included a visit of prime minister of Tatarstan Alexey Pesoshin, acting head of the republic at the time of a short leave of Rustam Minnikhanov. However, instead of Pesoshin, his first deputy Rustam Nigmatullin opened the three-day automobile marathon. Let us note that promised minister of industry and trade of Tatarstan Albert Karimov was also not present at the event, there was deputy minister Ildar Mingaleyev instead. Automotive market is getting better

Both the opening and the first session began with a moment of silence in memory of the victims in Kemerovo tragedy. After that, Rustam Nigmatullin, director general of the AEB Frank Schauff and vice president of Messe Frankfurt GmbH, brand manager of Automechanika Michael Johannes said a few words to the audience. Having finished with gratitude and courtesy, the forum participants moved on to the discussion itself.

Tatiana Arabadzhi, the director of Russian Automotive Market Research, opened the session of speakers on the analysis of the current situation in the Russian automotive market and forecasts for the future. Her conclusions were more than positive. If last year TIAF experts predicted a market recovery in 2017, then this year the forecasts have been confirmed by real figures — the growth was almost 20%. Moreover, 86% of all new cars sold were produced in Russia — this indicator has been achieved due to localization of the production.

Lada took the first place by demand in the top 10 among the most popular brands last year. It is followed by Kia, Hyundai, Renault, Toyota, Volkswagen, Nissan, Skoda, Ford and Mercedes Benz.

The positive dynamics has been marked not only in Russian but also in Tatarstan automotive market. If at last year's TIAF, Albert Karimov reported that in the structure of the industry of the republic the automotive industry occupied 10%, this year Ildar Mingaleyev spoke about a slight, but growth — up to 11,7%. 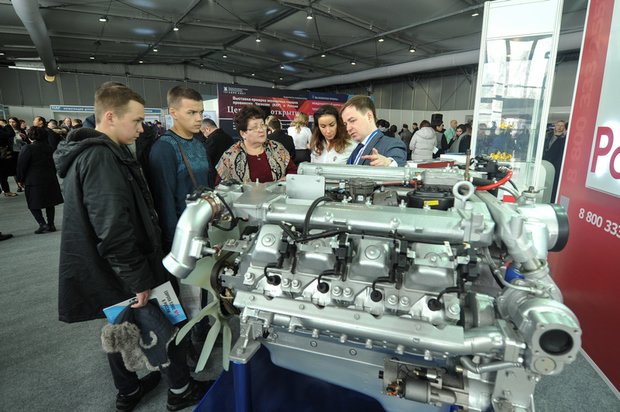 If last year TIAF experts predicted a market recovery in 2017, then this year the forecasts have been confirmed by real figures — the growth was almost 20%

This year, experts expect further market development, predicting a sales growth in the range of 10-14% and a production growth of 4-9%. However, further forecasts cannot be called comforting.

''We expect the growth to continue until 2021. Then there will be a stagnation, and after 2022, according to the forecasts of all leading economists, the economic growth is expected to decline. Accordingly, this will reduce the demand for cars and commercial vehicles,'' said Arabadzhi.

Later, at the request of Realnoe Vremya, managing director of Peugeot Citroen&DS Russia Alexander Migal gave his forecast for the development of the automotive market.

''I think that the assessment given by Mrs. Arabadzhi until 2021 is quite close to reality, because we have accumulated a huge deferred demand over these 4 years, and it will be realized. But it won't be able to be realized at the same explosive rates as it was in 2009, it will be smoother as purchasing power of the population hasn't grown that much,'' commented the interlocutor of the edition. He calls the annual growth of 10-15% optimistic and assumes that the real figures will be 7-10%. In addition to the exhibition of achievements of the domestic automotive industry and automotive components, it is planned to visit production sites and, most importantly, to organize individual meetings with possible future partners

Unmanned vehicles as a bifurcation point for the industry

Perhaps one of the main problems for journalists at the forum was the lack of good sound. The words of the speakers were difficult to understand, and their voices turned into a rumble on the records. Nevertheless, breaking through the sound barriers, they managed to make out prophecies about the future of the automotive industry.

Boris Pankov, the director general of Omnicomm, drew a parallel between cars and smartphones, into which cars will turn through the introduction of software. According to him, the car market is on the verge of opening the ecosystem, and in the future for drivers there may appear applications with private and public data clouds.

Alexander Migal, the managing director of Peugeot, Citroen&DS Russia, went further and talked about the fate of unmanned vehicles, which he calls the quintessence of all the changes aimed at facilitating driving the car.

''We can confidently say that the unmanned vehicle is not something aerial and ephemeral, it is the reality that will be with us in 20, 25 years at best. We will see completely autonomous cars on city streets,'' the speaker considers.

He calls unmanned vehicles a 'bifurcation point for the industry', which raises many new questions. Among them — the issue of security and creation of special environment, where the new generation of cars will move, which systems will analyze the situation while driving. According to Migal, unmanned vehicles will officially appear on the roads in 2030-2040.