Sviyazhsk and Bolgar to learn how to work with tourists from the Czechs, Rosa Khutor resort and Kizhi museum-reserve

The participants of the IV Kazan Tourism Forum were looking for answers to the questions: how to attract visitors without damage to the environment and what tourists want

Representatives of the tourism industry market from 30 regions of Russia gathered in Kazan on 2 November to share their experience and to find an answer to the question of how to attract tourists not damaging the natural areas and local residents. The correspondent of Realnoe Vremya attended the plenary meeting to listen to the presentations of three projects, one of which was Czech, and found out what was the main problem of the domestic tourism market and how forum participants were going to understand the Russian and foreign tourists.

''The tourist often becomes incomprehensible for us''

The total of 1.500 people registered for the forum, but, as it usually happens, the actual number of participants was smaller. Chairman of the State Committee for tourism of Tatarstan Sergey Ivanov welcomed the representatives of tourism industry from 30 regions of Russia on behalf of the republic, then immediately explained why they all gathered there. ''Our forum is called 'Landmarks of the Future', and every time choosing a theme, inviting speakers, we try to answer the questions: how the industry will live in the next 3-5 years, what trends will be, what issues each region will face, what problems we will have to resolve and how we can be effective in the development of tourism,'' said Ivanov.

The main thing he called the search for an answer to the question: how to understand the rapidly changing behavior of the tourist?

''The tourist often becomes incomprehensible for us: why he goes, what imperatives guide him, how he makes decisions, what gives him pleasure and how the tourist uses the tourists product,'' said the speaker. According to the representative of the complex Lenka Berankova, they mostly receive tourists from the Czech Republic, but now there is a growing number of visitors from other countries, especially from the Far East

First at the forum there were presented the cases of development of three tourist sites: the world heritage object of UNESCO — the Lednice–Valtice Cultural Landscape in the Czech Republic, the resort Rosa Khutor in Sochi and the museum-reserve Kizhi in the Republic of Karelia. All of these projects are not similar to each other, but they all have good indicators of tourist traffic. So, the Lednice–Valtice Cultural Landscape in the Czech Republic, which is situated in natural landscape park and operates under the auspices of UNESCO, annually receives about 1.2 million tourists. About 700.000 people a year buy tickets to the castles of Lednice and Valtice alone.

According to the representative of the complex Lenka Berankova, they mostly receive tourists from the Czech Republic, but now there is a growing number of visitors from other countries, especially from the Far East — China and Korea. Among its tasks, the speaker named an increase in the number of accommodation and parking lots, work with local communities and creation of a management company.

No less interesting but very different is the resort Rosa Khutor in Sochi in the national park, which in three years of active work on attracting tourists has become one of the most visited in Russia. According to director for marketing and sales of the resort Olga Filipenkova, last year it was visited by about 2 million people, specifically in the winter season the period of 2016-2017 years — 800.000 people. The policy of the resort is formed by the management company, while the hotels in Rosa Khutor have their own policy, but they act in the framework of the common policy of the resort. Thus constructed work, according to Filipenkova, is very effective.

The situation with Kizhi is more complicated. The complex is located on the island, because of which the tourist season here is frozen together with Lake Onega, when ships stop operating. Every year in the season the complex is visited by about 160.000 people, but in the winter it is only few thousands. The complex is located on the island, because of which the tourist season here is frozen together with Lake Onega, when ships stop operating, said Irina Anikina

''The number of tourists increases every year. Of course, they are not the same as in Tatarstan, last year we served only fifteen hundred people, but for us it is very large figures,'' said deputy director for social and cultural activities and promotion of museum services of the museum-reserve Kizhi Irina Anikina.

In the offseason, it is possible to reach the island only by helicopter. This year with the support of the ministry of culture they have acquired five vessels on air cushion, thanks to what it will be possible to get from Petrozavodsk to Kizhi in winter as well. The object is developing due to international, private, interregional and regional partnership.

The work is just beginning

It is no secret that Russia only in the last decade began to develop tourist destinations in the regions. According to Olga Filipenkova, domestic tourism is being in its infancy yet.

''I come from international tourism and over these three years I have seen that Russia lacks the dynamics, those rules and traditions in inbound tourism, unfortunately. I think we are one of the leaders who apply what we know,'' said director for marketing and sales of the resort Rosa Khutor. The speaker noted that, in her opinion, the driver of domestic tourism development could be the preparation of specific proposals, which would be useful, convenient and beneficial for tourists. 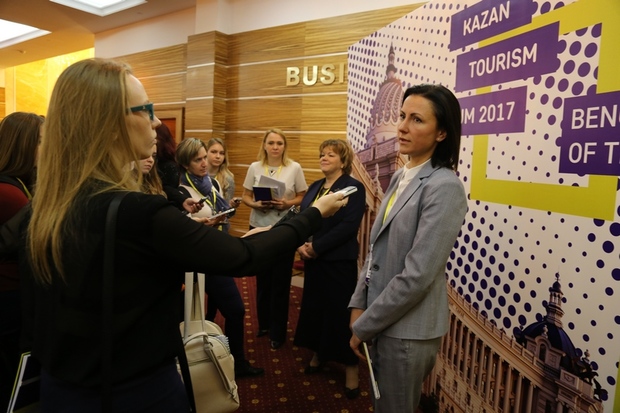 According to Olga Filipenkova, domestic tourism is being in its infancy yet

As for UNESCO objects, here in addition to the current difficulties in the industry, there are still restrictions imposed by the World organization and issues in the development of the territory. In response to the question of Realnoe Vremya, Lenka Berankova, the representative of the world heritage object of UNESCO, the Lednice–Valtice Cultural Landscape (Czech Republic), said that, in her opinion, one of the main challenges of development of such objects was finding a common language with local population, since they were not always positive about a growth of tourist flow.

''It is important for the managers of this zone to balance between locals and tourists so that it was comfortable for everyone,'' Lena Berankova answered.

According to Sergey Ivanov, the experience of all three presented projects will be a rewarding experience for Tatarstan, and the challenge now is to take all the best and implement in the republic.