The alliance of oil exporters is about to announce the decision to extend the oil cut agreement for the first half of 2019. It is assumed that the daily production output will be cut by 1 million barrels. How it will affect the world market, why Donald Trump considers oil prices too high, and Russia treats the next restriction without the same enthusiasm as before — read in the material of Realnoe Vremya.

On 5-7 December, OPEC in several stages decides whether it is necessary to extend the oil cut agreement, concluded at the end of the year before and for the first time extended in November 2017. On Wednesday in Vienna, the OPEC+ monitoring committee recommended to cut the production for a period of six months, but did not give recommendations on the volume of the cut. The final decision on the agreement is expected to be announced after December 7.

While the alliance was holding official talks, US President Donald Trump on Twitter expressed the hope that OPEC would not cut the oil production. He wrote that the world does not need high oil prices. This is not the first time Trump says this — such tweets he posted in June and April.

Hopefully OPEC will be keeping oil flows as is, not restricted. The World does not want to see, or need, higher oil prices!
— Donald J. Trump (@realDonaldTrump) December 5, 2018

Foreign media published earlier that the participants of the oil market are afraid of what impact Trump can have on the negotiations, as his interests diverge from the interests of the alliance.

The US president is interested in the oil prices to be about $60 per barrel. Otherwise, the world and American economies begin to stagnate, inflation increases, the fed raises rates, and the dollar rate strengthens. This goes contrary to the purpose of the administration of Trump on the production recovery in the country and export increase, explains analyst for commodity markets at Otkritie Broker Oksana Lukicheva.

A thousand miles away…

However, attention was focused not only on Trump. ''The most important decision maker will spend the day [December 6] a thousand miles away [from Vienna],'' Bloomberg wrote. Under the ''main decision maker'' the edition meant Vladimir Putin, who on Thursday chaired a meeting of the Supreme Eurasian Economic Council in St. Petersburg. Russia is a key player outside the alliance, and Putin must decide what contribution the country can make to the overall cut, Bloomberg notes.

A high-ranking delegate of the meeting in Vienna, who asked to be unnamed, told the newspaper that OPEC is facing persistent resistance from Russia, which does not want to agree on a big cut. The unofficial leader of the alliance, Saudi Arabia, has made it clear that it is not going to take on the overall burden of cutting the production alone. It was reported that OPEC participants lean in favour reducing the oil production by 1 million barrels per day, although the figures are not final. 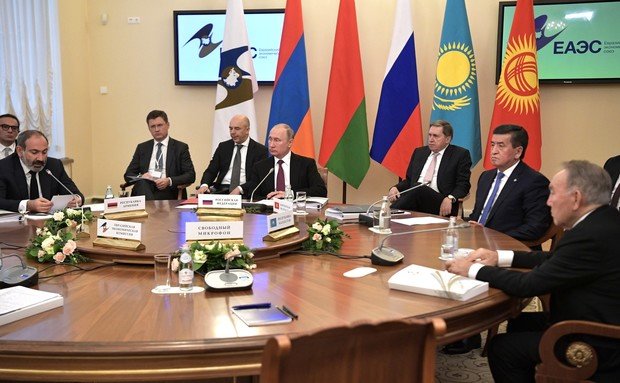 Under the ''main decision maker'' the edition meant Vladimir Putin, who on Thursday chaired a meeting of the Supreme Eurasian Economic Council in St. Petersburg. Russia is a key player outside the alliance, and Putin must decide what contribution the country can make to the overall cut, Bloomberg notes. Photo: kremlin.ru

The fact that all eyes are on Russia shows how OPEC has changed since 2016, when Russia and Saudi Arabia overcame differences and began to jointly influence the market, Bloomberg notes.

The head of the analytical service of the criminal code Dokhod, Vladimir Kiselev, explains why Russia opposes a strict oil production cut, ''There are large state-owned companies that are actively lobbying for production increase. Rosneft plans an increase of 5%, Gazprom Neft — of 3,5%. Naturally, they want to implement their programmes. I think there is an opinion among the oil establishment that it is necessary to get out of this deal to implement short-term plans. Apparently, there are expectations prevailing that in the long term the deal will not lead to a significant increase in prices. Therefore, we see that there is no particular enthusiasm.''

''Russia now has much less positive about the prospects of the restriction. The thing is that the entire volume, by which OPEC + has cut the production, was blocked by American shale oilers. As a result, this cut only temporarily raised oil prices. Now oil producers have questions about the effectiveness of this method,'' said the head of the department of asset management at General Invest Denis Gorev.

The effect is not the same as before anymore

How will the OPEC's decision affect world oil prices? According to Oksana Lukicheva, if the production is reduced by 1 million barrels per day, it will not have the same effect as before, ''Most likely, prices will receive little support, but will not get a rapid growth. Moreover, in the first quarter of 2019 there is going to be a seasonal reduction in demand.''

The new cut is unlikely to work out as before, Gorev agrees. ''The market has already noticed the fragility of the trend to price increase from such statements. In addition, even the OPEC+ format is not able to have a serious impact on prices in the long term. One of the factors that led to this is the growth of competition from the shale industry.'' In the course of this year, OPEC repeatedly lowered the forecast for global oil demand in 2019. Photo: Priwo / wikipedia.org

The production in the US has updated historical highs this year, which has given rise to concerns about the balance of supply and demand in the oil market. In the course of this year, OPEC repeatedly lowered the forecast for global oil demand in 2019. So, in October, the alliance lowered it by 50,000 barrels per day — to 1,36 million barrels.

According to Kiselev, the growth of production in the US has already compensated for the falling volume of oil that arose as a result of the cuts by Russia and Saudi Arabia in 2016. Only increased global demand helped to eliminate the surplus.

''Of course, the increase in production from the US can not only partially offset the effect of the new reduction of OPEC, but it is already doing it,'' says Gorev. According to him, the United States is already ahead of Russia in production, and their oil exports has increased to 2,5 million barrels per day.