Rustam Minnikhanov: ''Petrochemistry remains one of the leading sectors of the Tatarstan economy''

Russian Energy Week forum has taken place in Moscow for the second year in a row. Representatives of the biggest international and Russian companies, leading experts are discussing problems, the logic and tendencies of development of energy and oil markets. Who consumes the most gas in the world? How can gas and petrochemistry be supported? What a new industry will appear in Russia? Realnoe Vremya tells the details.

Representatives of the biggest international and Russian companies, functionaries and leading experts gathered in Moscow to discuss key trends and problems of the fuel and energy complex. Russian Energy Week forum has taken place in Manezh central exhibition hall for the second year in a row.

A Tatarstan delegation headed by the republic's President Rustam Minnikhanov arrived in the forum early in the morning. Together with government representatives, officials of TAIF GC and other representatives of the Tatarstan fuel and energy complex, Minnikhanov immediately headed to the first discussion about the future of the gas market on the programme.

Russian Energy Minister Aleksandr Novak became the key figure of ''How Will Global Gas Market Look in 2030?'' panel session. ''Gas will be more sought-after hydrocarbon resource until 2040. This resource complies with ecological requirements most, has huge reserves in the world, possibilities of production, transportation. In addition, gas will be in demand in many spheres: electric power engineering, transport, gas chemistry,'' he noted welcoming the audience.

''Almost by 70%, which is more than three times than growth paces in general commerce. And the number of consumer countries has grown from 17 to 40,'' Novak said. He explained these processes were linked with improved transportation technologies. 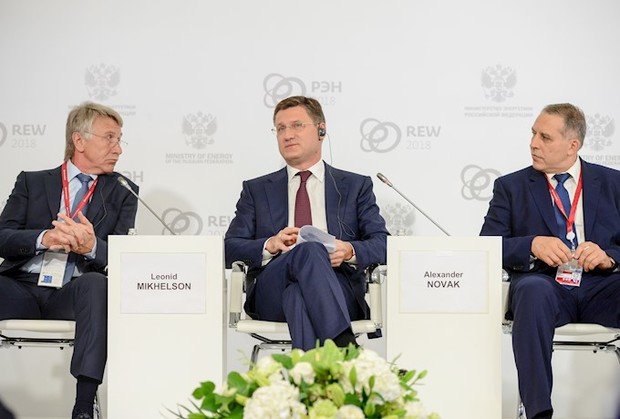 The minister forecasts the share of gas in the world energy balance will increase from today's 23% to 26%, the rise in demand's growth paces will total 1,8%. Photo: Yevgeny Reutov / photo.roscongress.org

The minister forecasts the share of gas in the world energy balance will increase from today's 23% to 26%, the rise in demand's growth paces will total 1,8%. In addition, general energy consumption in the world will be growing at lower paces – 1%. The general demand for gas will rise by 40% until 2035, gas sale will annually increase by 2,6%.

Novak says Yamal-Nenets Autonomous District has colossal reserves of gas fields. ''Yamal has about 40tr cubic metres of gas reserves, the reserve base allows to provide production of liquefied natural gas from 80 to 115m tonnes a year,'' the energy minister claimed. In addition, from his point of view, the reserve base allows to increase pipeline gas supplies to Europe and the Asia-Pacific Region. ''Pipeline and liquefied natural gas from Russia will complement each other, not compete in traditional markets,'' Aleksandr Novak is convinced.

In his speech, the head of the Russian Fuel and Energy Complex also mentioned the key projects of the Russian gas sector – Nord Stream 2, two pipelines of Turkish Stream and Power of Siberia gas pipeline, which is under construction. Gas is more in demand in China today. ''LNG purchase volumes in the PRC have increased by almost 50% in 8 months. It's a huge market, and there can be new areas here,'' the minister said.

In addition, he told about the possibility of limiting Russian gas supplies.

''We've been hearing about it for the last several years. What's happening in fact? Russian gas export annually grows by 6-7%. There will be record gas supplies to Europe this year. We've reached the highest consumption volumes,'' Novak concluded. According to Mikhelson, a new industrial sector will be created in Russia in the next five years – production of equipment for LNG projects. Photo: Yevgeny Reutov / photo.roscongress.org

Board Chairman at Novatek PJSC Leonid Mikhelson agreed with the opinion of the energy minister. He agreed that the gas market was growing rapidly and noted the special role of LNG in this issue. He called gas pricing as a problem area.

''Gas price in the majority of regions in the world is still fixed by oil price and has similar dynamics. Today this doesn't comply with market reality. Gas is gradually becoming an independent good. Due to oil dependence, gas volatility doesn't reflect the real situation in production and consumption. If gas price grows after oil, our expectations of the market growth can be confounded,'' Mikhelson thinks.

According to him, a new industrial sector will be created in Russia in the next five years – production of equipment for LNG projects. ''We're working with other enterprises on it. Our goal is to make Russia enter the world market as an LNG equipment supplier. It's planned to attract over 800 enterprises,'' the Novatek director said.

The next session of the energy week that Rustam Minnikhanov managed to not only visit but also where he gave a speech was dedicated to petrochemistry.

''Petrochemistry is one of the key development segments. Fuel's hydrocarbon segment growth will reduce in 15-20 years, but this not about petrochemistry. The middle class is growing, while it's the main consumer of petrochemical products,'' Deputy Energy Minister Pavel Sorokin claimed. Russia has all categories of feedstock, but there are few production capacities.

''Now we're producing about 10bn tonnes in petrochemistry, most part is consumed in the domestic market. Export totals 3,2bn rubles. Numbers aren't impressive,'' Sorokin stated and noted that the regions that would create their own production base would be at an advantage. Tatarstan is among them today. 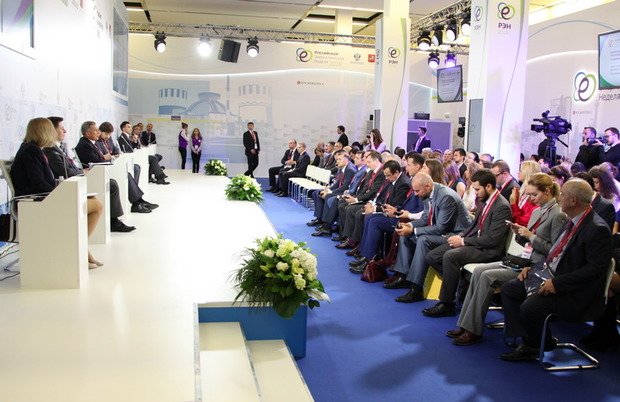 The next session of the energy week at which Rustam Minnikhanov managed to not only visit but also give a speech was dedicated to petrochemistry. Photo: president.tatar.ru

''I represent the region hooked on oil,'' Tatarstan President Rustam Minnikhanov began his speech with a joke. He focused on the necessity to stop selling oil and develop its refining. ''The most important thing in our strategy is to develop the oil and gas sector. Nowadays petrochemistry continues remaining one of the leading sectors of the Tatarstan economy. Two factories operate in the republic today. We refine 16m tonnes of oil and will be launching another factory with a capacity of 6m tonnes in the short run. We've been annually adopting development programmes of the gas and petrochemical sector of Tatarstan since 1990. We have two big groups: TAIF and Tatneft. Investments in new projects have totalled 1tr 300bn rubles over this time. It's 710bn rubles in the last 5 years. It means the petrochemical complex is the growth point of our republic.''

The head of Tatarstan noted the sector's task was to get rid of monomer production and start producing more sought-after products.

Support of the investment climate for gas and petrochemistry was also discussed at the session. Viktor Yevtukhov, deputy minister of industry and trade of Russia, marked three priorities for this purpose – the creation of clusters, the refusal of the export commodity model and the chemicalisation of Russian products. ''Clusters are used in all sectors of the industry. Tatarstan can be put as an example, a cluster scheme is applied there, it's vertical integration from basic production to production high value added products,'' Yevtukhov said. According to him, clusters meet the sector's demand for qualified staff and provide necessary infrastructure.

Apart from plenary sessions, the Tatarstan president took part in the signing of agreements on cooperation of Tatarstan and Germany, which are important for the region in the sector. 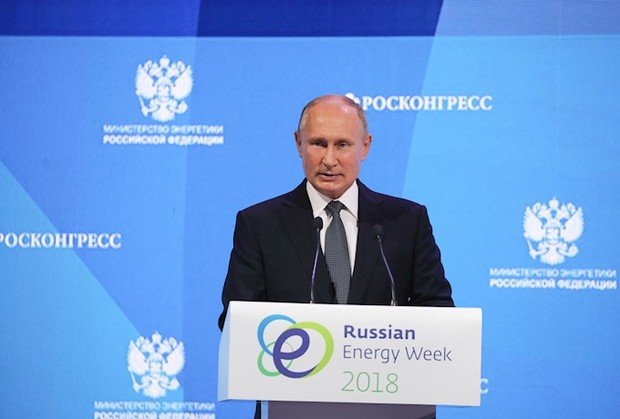 The Russian president noted in his speech that demand for oil would be rising in the nearest future and mainly thanks to consumers in the Asia-Pacific region. Photo: Vyacheslav Viktorov / photo.roscongress.org

To balance prices in oil market as goal

The main plenary session at which Russian President Vladimir Putin became a speaker began in the afternoon. In fact, it opened the energy forum.

The Russian president noted in his speech that demand for oil would be rising in the nearest future and mainly thanks to consumers in the Asia-Pacific region. Liquefied natural gas trade volumes are also growing in the world at the same time. Mining and power engineering demonstrate positive dynamics. Demand for electric energy is forecasted to grow faster in the next 20 years. Experts think its consumption will double by 2040 when demand for primary energy – oil, coal, gas and other sources – increases by some 30%.

Nuclear power engineering is also taking the lead. ''Today Russia is actively building 25 energy units of nuclear power plants in 12 countries of the world, we portfolio has 36 energy units of this kind in total. We will consecutively work to increase exports in nuclear power engineering and simultaneously save the highest ecological and industrial safety requirements,'' Putin said. Development of renewable energy sources, especially in remote and hard-to-reach regions of the country, becomes a separate task.

Answering questions, the president said how oil prices became balanced in the market.

''When we agreed to reduce production with our friends and colleagues from OPEC, we meant to reduce excess reserves, make the market balanced because the state of the sector matters, not incomes of oil companies so that one could line the pockets,'' Putin said and added that Russia had already increased production by 400,000 barrels a day and, if needed, it would increase by 200-300,000 barrels more.