Ten-day protest movements against the appointment of ex-President Serzh Sargsyan as a prime minister of Armenia yielded fruits on 22 April – the head of the country who promised the people in 2015 he wouldn't remain in the lead of the country for another term and who didn't keep his promise worked as premier for just 6 days and resigned by admitting opposition leader Nikol Pashinyan was right. First Vice-Premier Karen Karapetyan became the acting head of the government of Armenia. Meanwhile, Pashinyan was released from the detention centre together with his fellows on 22 April – the three men were arrested on Sunday for organisation and holding illegal public gatherings. Famous journalist and defender of rights Maksim Shevchenko shared his vision of what's going on in Armenia at the moment and why people were on strike.

Amid protest campaigns, Prime Minister of Armenia Serzh Sargasyan resigned, which became a surprise for many people. What do you think of his resignation?

It didn't become a surprise for me. The people was brought to despair, it was angry, the population of Armenia lives in poverty, it has to leave its country, go to Russia. Probably a half of the country moved to Krasnodar Krai, to Northern Caucasus. In fact, it's not machinations of the West but long overdue social rebellion of the working Armenian people. Perhaps, some of the big players use it – Moscow, Washington, London, Paris. But, in general, several people are hyper-rich in Armenia – they are multibillionaires, while the bulk of the population is extremely needy people who are on the verge of poverty and misery.

Who will come to power now? The opposition has been very active.

Sargasyan still has quite a serious Karabakh clan. And his resignation from the post of premier doesn't mean, for instance, an escape from the country. I just don't know the Armenian Constitution very well – probably there will be new elections of parliament and president. It seems to me a normal way out of the crisis.

Head of Way Out parliamentary alliance Nikol Pashinyan, who left the detention centre on Monday, chairs the opposition movement. Does he have chances to come to power?

He is a popular leader. He probably has chances if there is an election to the parliament, to enter it and occupy an important public post. I don't think the situation will go outside the constitutional framework. Nevertheless, Armenia will be within traditional democratic procedures. ''Sargasyan still has quite a serious Karabakh clan. And his resignation from the post of premier doesn't mean, for instance, фт escape from the country.'' ekhokavkaza.com

There is an opinion among experts that now the opposition in Armenia has come together around the unwillingness to see Sargфsyan as a prime minister. Will they be able to agree with each other after the premier's resignation?

The common hate for Nicholas II of Russia and the tsarist regime also united the Bolsheviks with the Cadets, you know. But this doesn't mean they were allies. Of course, when there is a common enemy and a common goal, people consolidate. Now a political fight for power will begin. To tell the truth, I see nothing bad in it. Any country needs an update, a shock. It's good if they end peacefully, and despite the disorders and street protests, it all will grow into normal constitutional and democratic forms. It will be a good result.

By the way, as for disorders, in reports from Erevan meetings, journalists notice that protests develop mainly peacefully, and the opposition instructs not to conflict. The authorities have the same guideline. Why?

It's non-violent resistance – all is great. Things happened in Armenia – the parliament was fired, and there was political murder. Now nobody obviously wants domestic clashes. I personally hope that residents of Armenia will come to an agreement and create some political mechanism of the future – it will be good. I would wish them success on this road.

Why do you think militaries joined the protesters?

Armenia is a multi-ethnic country where almost one people with small incrustation of Russians lives. It's a small country with a very small population. This is why, naturally, all support each other and respect each other. Great Armenia is like one big village. Why should the army fire people or not switch to their side? Everybody knows each other. This is why everything will be solved there behind the scenes.

Meanwhile, there is a very big number of super-rich Armenians in Russia, the USA, France who, of course, consider Armenia their resource. Their number in Russia is bigger, as the Armenians who grew up in the USSR naturally have more power in Armenia than French or Syrian Armenians. This is why I think they need to look at diasporas – which billionaires influence more, from which diasporas, what criminal elements are able to affect the situation in modern Armenia more. Undoubtedly, a fight of diasporas for influence will start now. 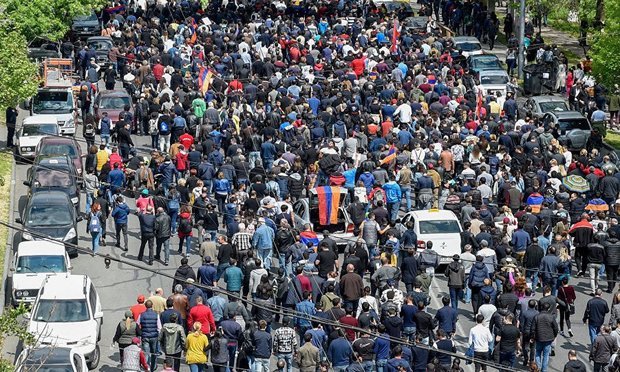 ''The people was brought to despair, it was angry, the population of Armenia lives in poverty, it has to leave its country, go to Russia. Probably a half of the country moved to Krasnodar Krai, to Northern Caucasus.'' Photo: ritmeurasia.org

Are simple people who don't have millions and links able to influence the course of events?

The people in itself isn't able to get rid of the oppressor. But the oppressors are able to bring the situation to the moment when the people gets certain power due to the spreading anarchy, and some spontaneous laws start to wander. Then there will be either leftist dictatorship or extreme right. There aren't democratic outcomes from anarchy. But I don't think that somebody will bring the situation to anarchy. The church is actively participating there, the Armenians have political and spiritual institutions that structure the wind of protest and all that's going on.

''Though Serzh Sargasyan was a politician able to negotiate''

Do you think that Russia, which is officially standing on the sidelines now, influences the situation? What about the West?

It's clear that today Armenia is the main lodgement of Russia and Iran on Caucasus and Asia Minor. It's the main linking nucleus of communication of Russia and Iran, including transport. We have two operating channels to Iran – through the Caspian Sea and on land to Armenia, to Verkhny Lars via Georgia. It's clear the West is striking Armenia, which is considered Russia's ally, though, in my opinion, it's no ally from just an ideological perspective, it's just pragmatically beneficial to Armenia to be located so. More precisely, not to Armenia but Armenian oligarchs who sell their country and their people right and left. I think there won't be any changes without a social revolution, without establishment of a modern fair democratic society and popular power. All this geopolitics is hot air.

Now the protests in Armenia started to be called a ''maidan''. And forecasts that this situation won't play into Russia's hands have appeared. Can this wave of protests affect our country?

This cuts no ice with us. We know nothing about Putin and his entourage's chess games. We aren't told the details and fed by patriotic… ''food'' on TV channels, the tension degree increases. We only guess about a big geopolitical game – Caucasus, Asia Minor, Syria, Crimea, Ukraine, Turkey… This means nothing to us with you, while it has some importance to Russia's rulers, businesspeople such as Abramovich, Deripaska and Usmanov, security forces. I think Putin's Russia strategically tries to beat a permanent path to the Near East. It's such a lasting dream of the tsarist empire and the Soviet Union – to have direct access on land, not only by planes – railway, roads – to shift troops, lay different kinds of communications to Caucasus, Turkey and the Iranian Plateau. Here Transcaucasia is the key issue, of course. For this reason, I think the fight for domination in Transcaucasia enters quite a tense phase.

Though Serzh Sargasyan had some conflicts with Baku, in general, he was a politician who was able to negotiate. Let's imagine that radicals, for instance, Dashnaktsutyun (the Armenian Revolutionary Federation) or nationalists will come to power in Armenia, they will sharply complicate relations with Turkey or demand war on the Karabakh front. Any thing can happen. This will severely hit Russia's plans, which needs quiet, calm, peaceful Armenia, a kind of balance of interests between Azerbaijan, Armenia and Georgia in Transcaucasia. We'll see. ''I think the fight for domination in Transcaucasia approaches quite a tense phase.'' Photo: ru.krymr.com

Can Azerbaijan take advantage of the unstable situation in Armenia and try to return Nagorny Karabakh?

It would be insensible for Baku now. This situation isn't about armed forces, the readiness of the Armenian army and armed divisions of Nagorny Karabakh. I think the ethnic war will only consolidate Armenian society and have a reverse result, not that Baku would like.