''Transformations of Tatarstan linked with successes of TAIF Group of Companies, Kazanorgsintez''

KOS discussed running tracks, relief road, reconstruction of Lebyazhye at a meeting with the mayor

This year it's planned to expand the relief road to Salavat Kupere (Rainbow) microregion. Buses for transportation of residents are already ready. Employees of Kazanorgsintez raised the transport problem in Rainbow at a meeting with the Kazan mayor. They were also interested in the beginning of construction of the cycling track to the chemical enterprise and erection of a polyclinic for kids, multifunctional centre and swimming pool in Rainbow. Realnoe Vremya tells the details of the meeting with the mayor.

The volume of construction work in Kazan exceeded 34 billion rubles The mayor told the factory workers about the main moments of the city's life in 2017.

''Kazanorgsintez today is one of the strongest leaders of the chemical industry in Russia and Europe. The city is proud that Kazanorgsintez is among the biggest enterprises of the Republic of Tatarstan in terms of its number. It occupies a special pace on the map of industrial enterprises of Orgsintez, firstly, as a basic enterprise, secondly, as Ecoleader that does a serious job to modernise treatment facilities,'' Ilsur Metshin noted. The mayor of the city says a series of important projects for citizens of Kazan were fulfilled in Kazan with the aid of TAIF Group of Companies. He enumerated the Chemists' Park, which was improved by efforts of Kazanorgsintez PJSC, the participation of TAIF GC in dilapidated dwelling liquidation and social mortgage programmes among the main.

''Thanks to you, Kazan is one of the few cities that not only conserved but also increased its income in 2017. Despite the crisis and sanctions, indicators of the urban economy say about stability almost in all areas,'' Ilsur Metshin said. Nowadays Kazan, which ranks fourth among 13 million cities of Russia concerning its population (excluding Moscow and Saint Petersburg), is first regarding turnover in retailing, public catering and volume of construction work. Mothers with prams in the street and working building cranes became the litmus paper of the city's well-being.

The mayor of Kazan told the factory workers that the volume of construction work in Kazan exceeded 34 billion rubles, 236 facilities were built. With this indicator, the city has had leading positions among million cities in the last 10 years. Over 78,000 people work in the sector. 958,000 square metres of dwellings were built in 2017. Here Kazan holds the highest position among the capitals of the Volga region.

Caring for the future

Ilsur Metshin paid great attention to the growth of the number of first-graders in the last 2-3 years. Over 15,000 kids were accepted to the first grade in the 2017-2018 school year. 19,000 first-graders are expected next year. The city actively builds schools. Two educational establishments for 1,200 pupils were built last year. Another three schools are supposed to open in the new school year. ''We see this is not enough. Another 40% of our kids study in the evening. We see the necessity to build schools, like 5 years ago. 27 land parcels in Kazan districts were booked for the new buildings,'' the mayor said.

Ilsur Metshin particularly thanked TAIF GC and Kazanorgsintez for the contribution made in the revival of Lakes Lebyazhye, which were almost lost. ''Such a large-scale job hasn't been done in Russia so far. The lakes became 4 metres deeper, a unique drainage system was used. Now the waterbodies are filled with water, the coastal zone of the lakes increased from 8 ha to 36 ha after all work ended,'' said the mayor. Among ecological projects of 2017, Ilsur Metshin called the re-cultivation of Samosyrov landfill

Among ecological projects of 2017, Ilsur Metshin called the re-cultivation of Samosyrov landfill. The mountain with a height of a 16-storeyed block of flats will turn into a green hill soon. Kazanorgsintez's workers knew from the mayor's speech a circus would open in March 2018 after reconstruction, a new zoo would start working by the end of the year, three new kindergartens and two schools would launch. It's planned to exceed last year's results in repair of yards and roads, 181 streets will be put in order, eight parks will be improved.

As soon as Ilsur Metshin ended his talk about the plans for 2018, it became clear the enterprise's workers had many questions for the mayor. Storekeeper of HDPE Production And Processing Plant Aygul Khamidullina who moved to Rainbow residential complex with her family and two kids last year was interested in the construction of a road from the microregion to the enterprise and erection of a polyclinic for kids, multifunctional centre and swimming pool in the complex. 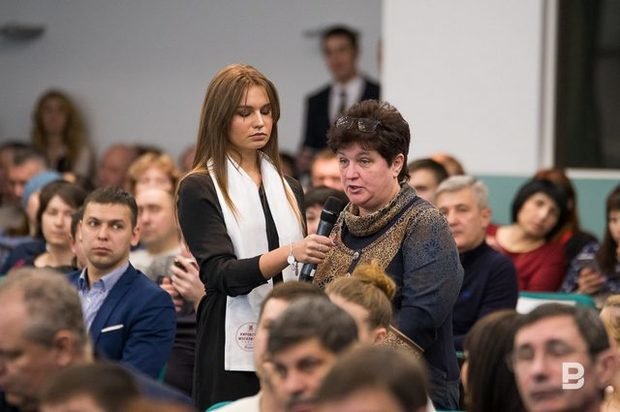 The KOS workers had many questions for the mayor

''The relief road needs to be completed, there are buses to fully provide the residents with transport. It's planned to expand the relief road. Then in summer, we can provide an additional number of buses. Three projects on road expansion are planned in total,'' Ilsur Metshin noted.

One of the enterprise's workers thanked the mayor for the fight against snow collapse and noticed his yard was clear after the snowfall. The mayor joked: ''You're lucky or the reason is that some of the directors live in your house.'' The employees offered to lay cycling tracks to KOS

The employees offered to lay cycling tracks to KOS. It turned out that factory workers were keen on cycling. And cycling parking was built in the company, which became twice bigger. It's not easy to solve the problem with cycling tracks, everything comes to the federal law that regulates the construction of roads. ''We can't make any through route in Kazan for cyclers not because we don't have the money but because the federal law doesn't allow it,'' Ilsur Metshin commented.

For labour and valour for the good of Kazan

The mayor the meeting with employees ended on an optimistic note by awarding Albert Shigabutdinov ''For Labour and Valour for the Good of Kazan'' decoration and appreciated the merits of TAIF GC to the city. ''Nowadays TAIF accounts for a half of the Republic of Tatarstan's economy. All our transformations of Russia and Tatarstan are linked also with successes of TAIF Group of Companies, Kazanorgsintez. Today with respect for you, your collective, we want to give you one the highest awards in our city. I'm fulfilling the instruction of the Kazan Urban Duma,'' said the mayor and gave Albert Shigabutdinov ''For Labour and Valour for the Good of Kazan'' decoration.

Kazanorgsintez's employees were also given commendations and awards they received from Kazan Mayor Ilsur Metshin.