Retired Soviet diplomat Yulduz Khaliullin about the absence of stability in the world. Series 12

Soviet and Russian diplomat Yulduz Khaliullin dedicated his today's column from International Panorama series to events taking place in Europe, Asia and Latin America. Our columnist elaborated on the forum in Davos, spoke about the complicated US-China relations and tumultuous events in Latin America.

On the fields of Davos

Last week, world media focused on covering the World Economic Forum in Davos (Switzerland), which brought together top officials of nearly 70 countries from five continents for informal meeting. They discussed the financial and economic situation in the world, risks, international conflicts and threats, including nuclear and cyber attacks. To put it simply, they raised the issues that await us in the coming year.

German Chancellor Angela Merkel and French President Emmanuel Macron, who actively agitated the European countries for creating a single, coordinated position on important international issues, stood out from the leaders of the European Union the most. They were joined by executives from Rome and Madrid, in particular, in the face of King of Spain Felipe VI.

Among the Asian powers, it was Prime Minister Narendra Modi who attracted attention the most. His country, as well as neighbouring China, even in the condition of recent economic crisis was developing at a fast pace: a growth of 5-6% of GDP. The media note that in India there is a growing middle class of new generation (35-40-year-old), which is more than 200 million people, according to some data. In China, the age of the middle class is much higher due to birth control, which in recent years has been slightly softened. In Davos, they discussed the financial and economic situation in the world, risks, international conflicts and threats, including nuclear and cyber attacks. Photo: weforum.org

A key figure of the world community visits Davos every year. The forum was visited by Vladimir Putin at the time (as prime minister in 2009). This year our country has been represented by vice prime minister of the Russian Federation, big businessmen, bankers, and President of Tatarstan Rustam Minnikhanov. In Davos, there take place meetings of political leaders, where they exchange views and establish contacts. It is important for Tatarstan, which has trade and economic relations with different regions of the world.

From the very beginning there was intrigue surrounding US President Donald Trump — whether he would arrive or not due to the government financing suspension. The restriction was lifted at the last moment, and Trump arrived in Davos. The focus of the press was on his meeting with Turkish President Recep Tayyip Erdoğan to discuss the Kurdish issue against the background of military actions of the Turkish air force in the north-east of Syria (Arfin). As it is known, Washington supported the Kurdish armed groups, including by supplying the arms, particularly when taking over Mosul in Iraq, as well as during the offensive on ISIS (the organization banned in Russia — editor's note) in Syria. The details of these discussions and any progress made by Ankara have not been disclosed yet.

The World Economic Forum's Global Risks Report 2018 highlights growing political and economic contradictions between the leading powers. Let me cite a clear example: it is estimated that in the year 2017 domestic debt of 20 developed countries has reached an astronomical figure of 140 trillion USD. Out of this sum, nearly a quarter accounts for the US. Particularly because of its growth the US Congress suspended financing the government (initially until mid-February 2018). It is internal debts to their companies. This figure shows where the world is heading, including wealthy countries.

Nevertheless, the World Economic Forum, which discussed current problems of international relations and clarified the positions of different countries, where they tried to gel, remains the center of attention. Of course, many important points of agreements between the leaders remain behind closed doors. But they can be brought into sharp focus in the near future, being in the heart of diplomatic and military actions in different parts of the world. From the very beginning there was intrigue surrounding US President Donald Trump. Photo: korrespondent.net

Perhaps, there were attempts to exert certain influence on Moscow concerning the events in Ukraine, to coordinate actions of some countries in the light of the upcoming presidential election in Russia. For example, the European Parliament has recently discussed the issue of support of Navalny.

By the way, if this year's special guest of Davos has been Trump, last year it was President of China Xi Jinping. In essence, the Chinese leader left a good impression. He was treated as a leader advocating for active normalization of international financial and economic markets, for globalization of this direction.

In this regard, I would like to focus on the relations between the two superpowers — China and the United States. The USA, in fact, have declared a ''trade war'' against China. The present administration even believes that China's joining in the World Trade Organization (WTO) was a mistake, made including by the United States. Trump's administration opposes the sales of new US technologies to China, which were done in exchange for extension of its economic business in China. Now they are even discussing the issue of penalties. To some extent, it is also a kind of restriction of trade and economic relations that make up a solid figure: annual balance is about 700 billion USD.

Interestingly, the latest plenum of the Central Committee of the Communist Party of China decided to inscribe the thoughts of Xi Jinping to the country's constitution as the ideas of socialism of the new economic era, i.e. the latest legacy of Marxism-Leninism. China is strengthening its position both in the country and in international arena.

The aim is the south-east

Russian Defence Minister Sergey Shoygu visited Myanmar on 20 January and signed an intergovernmental agreement (Russia-Myanmar) on simplified procedure of entering the naval ships of the two countries in the ports of Russia and Myanmar. Given a small number of vessels from the Asian partner, it is first and foremost about the Russian ships. It is essential when the region is troubled. 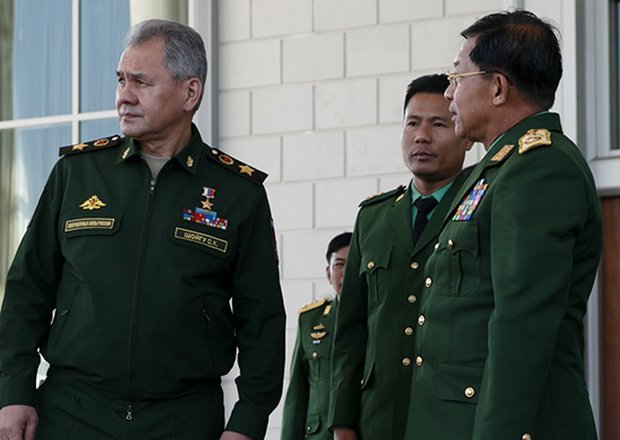 Sergey Shoygu signed an intergovernmental agreement (Russia-Myanmar) on simplified procedure of entering the naval ships of the two countries in the ports of Russia and Myanmar. Photo: function.mil.ru

In addition to Myanmar, Shoygu briefly visited two other countries in Southeast Asia — Vietnam and Laos. He held fruitful talks on cooperation with these countries in the military field (on the possible supply of our equipment). It has been noticed by the world media and seen as a ''campaign trip'' (as a member of Putin's Cabinet).

The countries of Southeast Asia are at an intersection between the Far East, where there is a conflict surrounding the Korean Peninsula, and the Middle East, where the conflict situation still persists. A further step, in my opinion, this region should direct at Malaysia and Indonesia — the largest Muslim states in Southeast Asia.

There have also been interesting events in Latin America. It draws attention to the visit of Pope Benedict XVI, an active pacifist trying to contribute to conflict resolution in different countries. I have been surprised a little by his visit to two countries — Peru and Chile. He was received quite frosty, despite overwhelming Catholic majority in Latin America. During the Pope's visit, protesters burned about a dozen Catholic churches because of sex scandals plaguing the Catholic Church. It was a surprise to many.

In Venezuela, there is being a growing confrontation between government and opposition. The demonstrations have been continuing for more than a year. The current government is being pressured by the American authorities. The economic situation of the republic is quite difficult. Juan Manuel Santos has taken a course on reconciliation — to negotiate with the guerrillas being in the jungle for almost half a century. Photo: ru.sputnik.md

In Colombia, there are taking place positive developments. The bloody fratricidal war between the guerrillas (the Revolutionary Armed Forces of Colombia, FARC) and the government has been taking place for already almost half a century in the country. Emil Dabagyan, a senior researcher of the Institute of Latin America of Russian Academy of Sciences, conducted an analysis of the situation. He concludes that President Juan Manuel Santos, who came to power in Colombia in 2010, has taken a course on reconciliation — to negotiate with the guerrillas being in the jungle for almost half a century.

Santos managed to bring the current leader of partisans Rodrigo Londoño Echeverri (Timoleón Jiménez, or Timochenko), who graduated from The Peoples' Friendship University of Russia (RUDN University) in Moscow, to the negotiating table. In Cuba, he studied at a partisan school and returned to Colombia. Apparently, that time he received support from Havana. The current head of Cuba, Raul Castro, responded to the initiative to stop the fratricidal war.

Echeverri has even announced his candidacy for presidency. The election is to be held in May 2018. What is more, he did a very clever thing by proposing the one who is not associated with the FARC movement — soft oppositionist Imelda Daza, who enjoys a certain respect — as his vice president. Of course, not all the guerrillas have laid down their arms. But a reconciliation process is highly visible. By the way, in 2016, Santos won a Nobel Peace Prize for these positive actions. And I hope his efforts will not go down the drain.