Two new residents of the special economic zone (SEZ) Alabuga have presented the projects of its plants worth more than 2 billion rubles. We are talking about the project of Korib GC, Naberezhnye Chelny, for production of automotive batteries, and the enterprise INKO-TEK Agro Alabuga, which will produce mineral fertilizers. The first plant is already operating, the second is to be launched by the end of 2018. Both have export ambitions. Read more in the article of Realnoe Vremya.

''Fertilizers – it is a junction''

Tatarstan President Rustam Minnikhanov gave a start to two new projects — the plant for complex mineral fertilizers, INKO-TEK Agro Alabuga PLC, and the production of accumulator batteries at the company Bars Technology (part of the group Korib of businessman Oleg Korobchenko) — on December 8th in the SEZ Alabuga. The projects are being at different stages. The plant at Bars Technology has already passed the technical assembly and, according to Korobchenko, begun to 'quietly put the batteries on the shelves'. The company INKO-TEK Agro has obtained the status of a resident of the special zone in September, so the launch of production is scheduled for the fourth quarter of 2018.

First, Minnikhanov arrived where there is to be located the fertilizer plant and took part in the ceremony of laying the stone in the foundation. The design capacity is to be 120,000 tonnes of fertilizers a year, and total investment amount is 717 million rubles. The plant is to employ 50 people. 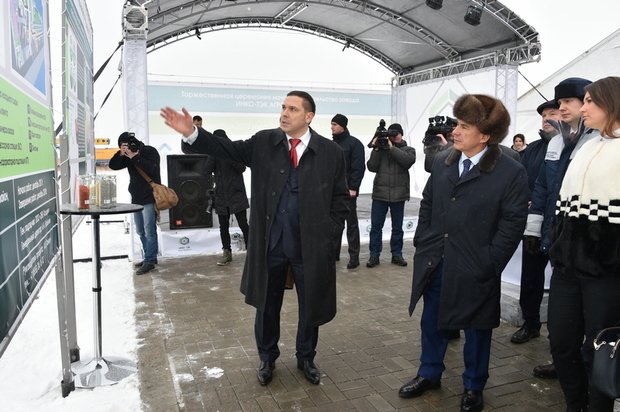 According to Babynin, he is building 'not quite typical fertilizer plant'

To the question why he, a businessman, a long time engaged in petrochemistry and oil refining, decided to invest in fertilizers, Babynin replied, ''It's a junction. Fertilizers – it is a junction. There is the principle: if you make up business projects, design, build, launch and operate best of all — build for yourself.'' As for location, Alabuga is interesting to the businessman from the point of view of logistics, infrastructure and tax incentives.

According to Babynin, he is building 'not quite typical fertilizer plant'. Russia produces about 6 million tonnes of different substances to improve soil fertility, but 'we want to organize a totally different principle — the principle of individuality'. ''The idea is to prepare the individual granule for specific culture. We will use not only key chemical agents, so to say, but also supplements, minerals, stabilizers of soil.'' Here the experience in petrochemical industry will help, the director general of INKO-TEK Agro explained.

The products that the enterprise will produce allow to count on, first, substantial growth in yields, and second, on 'the next leap in environmental friendliness', Bobynin says.

Before laying the stone, Minnikhanov said a few words about the future plant. ''Each field, each culture requires its own recipe, its own combination. And here our investor has taken on this subject. I believe this project is very important for our agriculture, for agriculture of our country as a whole. We will move in this direction,'' he said, adding that the company has 'a huge export potential'. When the lines reach full capacity, Bars Technology is to produce 3 million batteries a year

Immediately after this, Minnikhanov together with several ministers got into the minibus and in five minutes was opening the second plant. A tour around the enterprise for them and journalists was carried out by founder and owner of Korib GC Oleg Korobchenko.

According to him, the market of automotive batteries in Russia is by about 35% represented by imports. In 2019-2020, with the advent of a 'large customer', the plant Bars Technology is to occupy about 15% of the market, on the first stage — 7%. ''Our dream is to occupy a niche in imports. Well, accordingly, it is necessary to build the work so that 100% of our market was the production of batteries of Russian enterprises,'' Korobchenko said.

The total cost of the plant will amount to 1,3 billion rubles. When the lines reach full capacity, Bars Technology is to produce 3 million batteries a year, on the first stage — 1,5 million, said Korobchenko. Today, the plant employs about 100 people (it is planned 300), the company has already produced 150,000 units.

Bars Technology's accumulator range will be wide, the head of Korib promised. According to him, the plant will produce accumulator batteries for cars and trucks of different classes and for different climatic conditions. ''You all know what it is hard frost here in the north. You try to start the car two times, on the third time it already freezes. That is why we need a northern variant,'' he explained. At the opening ceremony, Minnikhanov told about the high level of technologies that Bars Technology uses, as well as about meeting the environmental regulations

At the opening ceremony, Minnikhanov told about the high level of technologies that Bars Technology uses, as well as about meeting the environmental regulations. ''Well, given the fact that the world is moving in the direction of the electric vehicle, there is a solid base for manufacturing in our country of electric vehicles,'' he added.

In response, Korobchenko told Minnikhanov the story that the currency crisis could destroy all the plans and no plant would have been there. ''If not you, this plant would have never existed. When in 2015 the dollar and the euro collapsed two times, honestly, we raised the question whether to open the plant or not. But when you came and said, ''Do it, I will support you,'' I believed and we started to act.''