Price for admission to ''Putin's'' projects: Tatarstan officials to take the exam

Regional civil servants responsible for the implementation of the priority federal programs will be obliged to take the exam to confirm their professional competence. As Realnoe Vremya found out in the Center of project management of RANEPA, where the exam will take place, their have not received an application from Tatarstan yet, but it's going to happen soon – the officials from over 85 regions of the country will be checked for knowledge.

Officials obliged to take the exam

The regional officials involved in the implementation of the priority projects of the government will be obliged to take the exam for project management. As Izvestia reported with reference to the Department of project activities of the Russian government, it will affect the officials from 85 regions of the country, including deputy governors. Officials with ''the lowest grades'' will have to retake the exam, and if they fail the test again, the question on their further participation in priority projects will be raised.

The list of 34 priority projects includes, for example, E-Healthcare, Safe and Quality Roads, The formation of comfortable urban environment, Ensuring the quality of housing and utility services, and others, including those successfully implemented on the territory of Tatarstan. The list of 34 priority projects includes, for example, E-Healthcare, Safe and Quality Roads, and others. Photo: Maksim Platonov

The necessary competences are a prerequisite for participation in priority projects, so the responsible officials are sent for training with follow-up exams. Regional civil servants have become the next after the managers and administrators of projects and programmes, senior officials, heads of working bodies who took the exam in June, some of them passed the test not from the first time.

The participants in the implementation of priority projects of the government of the Belgorod region are in the in the first in a row of regional officials to take the exam. At the request to the press service of the president of Tatarstan, Realnoe Vremya was informed that at the moment there is no information on the timing of the exam for Tatarstan officials yet.

Without phones and with video

The officials will take the exam in RANEPA (The Russian Presidential Academy of National Economy and Public Administration). As Realnoe Vremya was informed in the Center of project management of RANEPA, the qualifying session is planned to be held approximately once a month, but for larger teams there can be carried out individual examinations. Training is conducted before testing for both federal and regional officials.

The centre for project management of RANEPA is the center of competence of project management in the government of the Russian Federation. The examination tasks were developed in accordance with the requirements to project participants in part of their qualification in the field of project management, approved on March 22, 2017 by the Presidium of the presidential Council of the Russian Federation for strategic development and priority projects. Besides, these requirements are included in the list of qualifications of the Ministry of Labour of Russia for replacement of positions of public civil service. Training is conducted before the test for both federal and regional officials. Photo: ranepa.ru

The exam can be taken in two forms — written or electronic. However, a prerequisite is its intramural taking, in presence. To do this, on one of certain days one should attend a class at the academy and write the test. The centre of project management at RANEPA clarifies that the exam is recorded on video, the use of cell phones is prohibited.

Depending on project role and availability of international certificate in project management, each participant should demonstrate knowledge in the basic or advanced program ''Project Management in government'' at the Center of project management of RANEPA. Project managers and heads of the working bodies in the absence of a valid certificate must take the exam by intensive programmes. Senior officials can take only the basic program, which covers the specifics of the project work in the bodies of power in Russia.

With the help of the exam, the officials must confirm their personal and managerial competencies, including leadership, managerial decision making, teamwork, flexibility and willingness to change.

''The list of questions and the difficulty level are dependent on the project role. In the part of to the applied competencies — the project management — we decided not to reinvent the wheel and used the global experience in the field of certification exams, the listener for one astronomical hour has to respond to the proposed tests. The successful passing will be considered if the listener will answer 65% of questions,'' informed in the Centre of project management in RANEPA. A prerequisite is its intramural taking, in presence. To do this, on one of certain days one must attend a class at the academy and write the test. Photo: ranepa.ru

In part of personal management skills, it depends on the project role: project managers must score at least 13 points out of 18 by advanced programme, the heads of the working bodies — 11 points, and senior officials in the basic program must score at least 14 points out of 18. Based on the results, the qualifications centre issues the certificate of the established sample, and all project specialists who confirm the qualification level are entered in the Unified register of project professionals in the public sector of the Russian Federation, they are assigned a unique registration number.

Not only theory but also practice

CEO of the training company Teamsoft Guzel Khismatullina assesses positively the fact that managerial competence of officials are being developed but notes that the testing must take place not only in theoretical part but also in practical.

''It is good that we develop the managerial competence of officials – it is very good, they are clearly not enough. It is the art that is worth to develop. But competences, of course, are developed in the cource in practice. It is more difficult with the exam, oral or written, because even if it is be a case format where they should explain their actions in a given situation, we often know the right thing to do, but in practice we do everything differently.''

According to the specialist, in order to assess how developed the competences are, we need to see how a person acts in a particular managerial situation — how he or she makes decisions, sets goals, organizes teamwork. 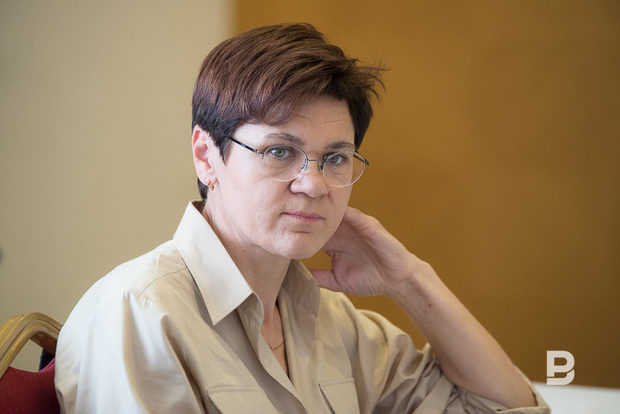 According to Guzel Khismatullina, in order to assess how developed the competences are, we need to see how a person acts in a particular managerial situation. Photo: Maksim Platonov

''There is a concept such as assessment. In this sense it is very good, because it is an effective assessment of the management competencies. It is not only the exam, it is necessary to demonstrate their actions in practice in a particular management situation,'' says Guzel Khismatullina.

Director of the consulting company Human Capital Maria Yegorova believes that competences of the leaders need to be checked by real results. Alternatively, instead of the exam she offered a method of structured interview.

''It is much more effective than, for example, the test method. A specialist-coach sets certain structured questions to a civil servant and due to his or her skills receives information about his or her competence. This method is significantly more expensive but also more, shall we say, reliable, because any test is relative,'' said the interlocutor of the edition. Maria Egorova said that even having poor test results a manager can be a very effective specialist.