''We have staked out a claim'': Chelyabinsk to fight against UFA for SCO and BRICS forums?

Intrigue with Khabirov, promises for small enterprises and Chinese train to Bashkiria

The Fourth Forum on Small Business of the SCO and BRICS Regions opened on 18 October in Ufa. Realnoe Vremya's editorial was working on site. Participants already made several interesting statements on the first day of the event. Details are in our reviewer's report.

Without Khabirov but with guest from Limpopo

The Fourth Forum on Small Business of the SCO and BRICS Regions took place in Ufa last week. The conference was in the Congress Hall – the major site of the capital of Bashkortostan to hold big events. Several rows of the concert hall, where the plenary session was, were occupied by Chinese delegates. By the way, their armchairs read China. Some rows were occupied by dark-skinned people – it's SAR representatives. Indonesians stood out of the crowd – many men had characteristic headdresses (songkok), while women wore Muslim headscarves and long bright dresses – everything complied with the concept of hijab.

About 1,500 people from 24 countries and 40 regions, over 100 speakers and experts took part in the forum. By the way, many, including the moderator, paid attention to the presence of a person from South Africa in the panel – Seaparo Charles Sekoati. Limpopo Province he represented caused curiosity together with childhood nostalgia – it's where, according to Korney Chukovsky's fairy tale, Doctor Aybolit rushes to save ill animals. The African guest chairs the Economic Development, Environment and Tourism Department.

Journalists and participants of the forum guessed whether acting President of Bashkiria Radiy Khabirov, who, as it's known, chaired the republic two weeks ago, would come. And his appearance in front of the international audience would be handy. For instance, previous president of the republic Rustem Khamitov, who resigned, was a constant participant of the forum. So organisers couldn't give a clear answer. But, unfortunately, there was no intrigue. Prime Minister of Bashkiria Rustem Mardanov had to open the plenary session as a host. 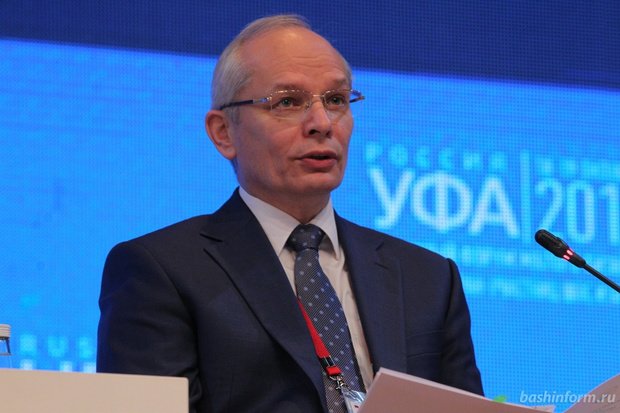 Prime Minister of Bashkiria Rustem Mardanov had to open the plenary session as a host Photo: bashinform.ru

''We consider this forum as a platform to implement BRICS and SCO programme documents. An SCO declaration and BRICS Economic Development Strategy were adopted here last year. Small entrepreneurship was pointed out as one of the cooperation forms,'' the Bashkir prime minister noted.

He added that there was created a single catalogue of more promising joint investment projects among priority areas after cooperation – agriculture, power engineering, manufacturing, IT. Nowadays the catalogue has 102 projects with over 92bn rubles of investments in total. In addition, leaders of member states decided to support young entrepreneurs – business incubators are created for this purpose, one of which operates at Bashkir State University.''

Thanks to the measures, according to Mardanov, the number of entrepreneurs and small enterprises in Bashkiria has grown by 13,500. Small and medium-sized entrepreneurs' turnover has exceeded 1tr rubles. Businesspeople from SCO and BRICS countries account for the most part of external turnover.

It's noteworthy that entrepreneurs themselves whom Realnoe Vremya's reviewer managed to talk with at the forum complained about excessive bureaucracy when running a business. According to them, most importantly, state functionaries shouldn't at least impede them from working calmly. They were quite sceptical about beautiful numbers and promises regional and federal state officials provided.

However, the ''kids'', as Director of Investment Politics and Entrepreneurship Development of the Russia Ministry of Economic Development Milena Arslanova called small enterprises, need state support.

''Small enterprises in Russia are a priority, there are included in the list of national priorities according to the president's May Decree. By 2024, we need to increase the number of employees in small and medium-sized enterprises from 19,2 to 25 million people and augment its export potential, investments. The whole range of experiments we have will be applied in the next six years,'' Arslanova told. The whole range of experiments we have will be applied in the next six years, Arslanova told. Photo: bashinform.ru

Laws adopted at the federal level aimed to support entrepreneurship in regions will help to carry out this ambitious task. Next year, concessional financing of small and medium-sized enterprises will total 1tr rubles. This sum will be 100-200bn rubles more every year, the MED representative claimed.

Special attention will be paid to the development of rural consumer cooperative, popularisation of entrepreneurship among different classes of the population. Moreover, educational programmes ''make a special focus on people of pensionable age'' who want to learn how to run their own business.

Director General of Golden Forest representing Chinese Jiangxi Province Xe Yuanpeng made quite interesting statements. It was the only foreign speaker to be speaking in the Russian language. Moreover, he joked his name in Russia was Zhenya.

He emphasised that Russian investments in joint projects with the PRC grew every year. Particularly fruits of cooperation of his region with Bashkiria are notable – in economy, education and culture.

''As a result of Prime Minister of Bashkiria Rustem Mardanov's visit to Jiangxi late this year, we plan to launch a direct freight train from our province to the Republic of Bashkortostan,'' Yuanpeng claimed. ''Mandarin oranges and tomatoes will be the first goods.''

What's more, he wants to open an office of his company in Ufa. The Chinese also actively look for partners in Bashkiria to supply Russian goods to the PRC. Additionally, it's planned to build a resort for Russian and Chinese tourists in the Celestial Kingdom, on the bank of a big freshwater lake.

''Many thanks,'' the Chinese delegate thanked all the people present in Bashkir.

Jiangxi Province probably decided to put down roots in Russia. As Realnoe Vremya told previously this Chinese region and Perm Krai signed an agreement on cooperation. Will Chelyabinsk be able?

Exchange of entrepreneurs' business contacts, presentations, round-table talks and expert sessions took place at the Ufa forum for two days, on 18 and 19 October. Agreements were also signed (over 200 contracts were planned this time).

In two years, in 2020, the Shanghai Cooperation Organisation and BRICS summits are projected to be held in Chelyabinsk. In this respect, our correspondent asked the forum's organiser in Ufa and President of the Chamber of Trade and Industry of the Republic of Bashkortostan Azat Fazlyev: ''Won't Chelyabinsk take the right to hold events of summits away from the Bashkir capital?''

''SCO business council's meeting and the forum will take place there. We will also take part and tell about our experience. Ufa has already staked out a claim on this event (Editor's Note: forum on small enterprises). Another project they promote is to be in Chelyabinsk this year – SCO regions forum. It's a level of governors, not entrepreneurs. While we have our own history, our own specialised site that will actively develop.''

By the way, some experts expressed their fear that Chelyabinsk won't be able to prepare to host such big events, and the summits would move to other cities. ''The preparation time for such events is reduced. But all will be fine there,'' Fazlyev calmed down. ''The country, not the city, hosts such things. Chelyabinsk is just a site. The case is in the rider, accommodation, accompaniment, security. Ecology is an important problem in Chelyabinsk. If they can solve their problems before this summit, we will applaud and praise them. It's a unique chance for them to change their position thanks to federal support.''