People's Inspector system tested in Tatarstan to be launched throughout Russia

The Russian government has made the first but big step towards the implementation in the country of the application People's Inspector, which allows the citizens to participate in the punishment of offenders. It is through their photo and video submissions the drivers will receive legal fines. Meanwhile, this system has operated in Tatarstan for three years, however, for now the offenders can easily appeal against these fines and find a ''snitch''. The changes in the law will deprive them of this opportunity. Read the details in the material of Realnoe Vremya.

People's Inspector from Kazan and Moscow will go all over Russia

A year has left before implementation of the system People's Inspector across Russia, currently operating in Tatarstan. After several years of discussion of the initiative, the government has approved the amendments to the Code of administrative offences, according to which video recording of traffic violations from the citizens will be the basis for fine imposition.

''Further the draft bill will be considered by the State Duma, and after the adoption of the bill, the government will proceed to development of supplementary decisions,'' the press service of the Open government quotes Minister of the Russian Federation for Open government affairs Mikhail Abyzov following the meeting of the government.

According to him, for three years they plan to spend more than 2,5 billion rubles on building the necessary infrastructure. However, the officials expect that a part of expenditures will be covered at the expense of the fines issued to drivers. The experience of Kazan and Moscow will be taken into account when introducing the system. Mikhail Abyzov: ''After the adoption of the bill, the government will proceed to development of supplementary decisions.'' Photo: kremlin.ru

More than 100,000 complaints, in the top — parking on the sidewalks

The application, with the help of which any witness can make a photo or video of traffic violations and send to the traffic police, has operated in Tatarstan since 2014. The pilot project then started very actively — in just the first four months of operation, the system received more than 5,000 submissions, the orders have already been made and reports have been drawn up for one third of them. In the course of operation, the application was improved and now it is the service, which includes in addition to recording of violations of traffic rules two other directions: recording of the parking in the ''green zone'' and separately — video recording of violations in the sphere of ecology.

According to the Ministry of Informatization and Communications of Tatarstan, since the beginning of this year, August including, through the mobile application People's Inspector they received more than 33,000 submissions from the citizens, the orders on bringing offenders to administrative responsibility were made for 74% of them.

Fifty eight percent of the cases, or 19,000 video materials, concerned violations related to parking on the pavement — this category for many years has been the most popular by the number of cases. More than 4,000 complaints over 8 months of this year relate to the failure to provide priority to pedestrians. Compared to the same period last year, the ''popularity'' of this category of offenses has increased 1,6 times. The third place by number of calls — the complaints about stopping or parking under the prohibitory sign, which were more than 2,000.

According to the data as of 6 July 2017, there were more than 113,000 submissions in total through People's Control since its launch, more than 86,000 of which were considered. At the end of 2016 alone, in the republic there were issued fines at 49 million rubles. 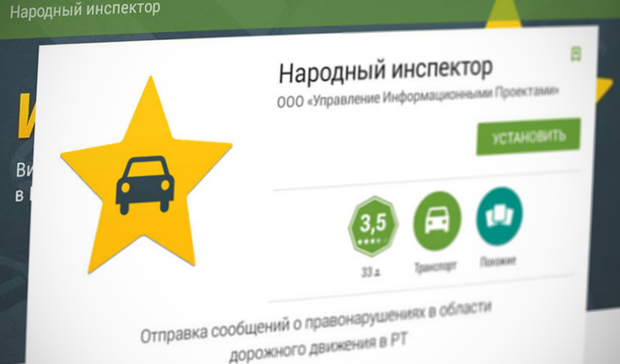 In the course of the application's work, there turned out one more thing — the fines received this way are easily can be appealed against in the court. Photo: kazanfirst.ru

The fines are not legitimized, and ''snitches'' are known in person

The republic received the launch of People's Inspector with skepticism, and the citizens almost immediately divided into two camps — those who started to download the app and those who regarded the first category as ''snitches''. In Vkontakte there appeared even a group People's AntiInspector, which tells how for free, legally and without lawyers to cancel a fine, it even has the ''wall of shame'' to ''know informers in person''. However, the latter is not popular, but raises another important question. The users sending information about a violation must indicate their real name, surname and place of residence. The violators do not receive this information with the fine ticket but they have learned how to find the ''snitches''.

In the course of the application's work, there turned out one more thing — the fines received this way are easily can be appealed against in the court as the government has recently adopted the amendments in the legislative base allowing to consider the recording of violations of citizens legal. The violators are taking advantage of this loophole, and the users of People's Inspector directly in the App Store ask to pay attention to it.

''You better find a solution with the traffic police, HOW TO LEGALIZE FINES through the application in the courts. The courts en masse repeal the decrees issued through the app. Deal with it!'' offers one of the users.

''No doubt offenders must be punished''

Dmitry Klevtsov, Vice President of the Federation of Russian Motorists says that they offered the government a similar scheme with the people's control several years ago. He believes the initiative to be right but notes that during its development it is necessary to make it more concrete and explain it to the people to avoid mass discontent.

''Huge work is ahead. What have been adopted is only creation of the conditions, but a huge amount of work have to be done in order to create an effective system. It is better that it was implemented in the form of a GOST — then there will be clear definitions, terms, concepts, rules of using and methods, and the system would indeed be highly effective,'' said the interlocutor of the edition. Dmitry Klevtsov explains that by making amendments to the administrative code the officials want to equate the application People's Inspector to the automatic photo recording systems. Photo: reporter64.ru

He explains that by making amendments to the administrative code the officials want to equate the application People's Inspector to the automatic photo recording systems. The speaker focuses on the fact that it needs a reform of the system of appealing the administrative violations, ''It is no doubt the offenders must be punished. There must be the certainty of punishment, but there should not a bullying of a person because we understand that even under the current system of the load of the centers for automatic photo recording it is difficult to appeal this administrative offenses at the moment. And due to these apps the work will significantly increase.''

Besides, today under the article 25 of the Code of administrative offences, in considering administrative proceedings the defendant has the right to review the case materials and know the personal details of the applicant. Then, after the changes are made, complaints can be send only after registration on the website of public services. The offender won't be able to get information about the complainant except the indication number.''

In general, Dmitry Klevtsov notes that the draft bill requires a huge work with the nuances so that people clearly understood the rules and used the system to keep order on the streets but not to get neighbour revenge.