Tatarstan 4.0: Artyom Zdunov decided to start digitalisation of the republic’s economy with Zakamye

It became known on the 3 rd Mechanical Engineering Cluster Forum that authorities of the Republic of Tatarstan decided to start the digitalisation of the Tatarstan economy with Zakamye or Innokam Kama Cluster. Tatarstan Minister of Economy Artyom Zdunov told it was early to talk about the scale of investments as well as the budget impact of the investments: Strategy-2030 doesn't have a separate block of the digital economy yet, but it will certainly appear soon. Having visited the forum together with Zdunov, we knew what steps the German company that supplied first robots to KAMAZ 25 years ago made to meet the authorities halfway and how 3D printers would help SMB of Chelny to catch up Microsoft and Amazon. We also heard that export and new foreign markets were ''the only solution for unlimited growth of Russian manufacturers and the economy'' and tried to solve ''the case for Marat Akhmetov'' with an example of unmanned harvesting in England that was demonstrated by British experts. The question is what to do with the freed labour force in case of such automation.

The 3rd Mechanical and Engineering Cluster Forum kicked off in Naberezhnye Chelny's IT Park on 15 November. This time it was dedicated to digital production and digital economy, the future of the industry. The very forum was initially created to develop Innokam cluster – both are supervised by the Tatarstan Ministry of Economy. The founders and supervisors note that the forums are held to form mechanical engineering and other related sectors' development strategy. Particularly at the business and authority seminar, public and private support was discussed. But most importantly. They talked about issues of ''additional load of free capacities in industrial enterprises'' and cooperation in the production of advanced technology goods for the needs of industrial enterprises and ''improvement of the quality of life in territorial and sectoral clusters''. Such round-table talks, seminars and sessions as Industrial Robotisation: Experience of Europe and Russia, Blockchain Pitch, Additive Technologies: Best Practices were announced on this year's ''digital'' forum.

Before the plenary session headlined Four Steps To Digital Era, Minister of Economy of Tatarstan Artyom Zdunov who arrived in IT Park (first promised speakers Tatarstan PM Aleksey Pesoshin and Mayor of Naberezhnye Chelny Nail Magdeyev did not appear on the forum in the end) and was accompanied by head of the economic block of the City Administration of Naberezhnye Chelny Natalia Kropotova looked over the exhibition of ''achievements of digital economy''. The minister acquainted with several already fulfilled projects of Tatarstan business: from the Internet of Things to industrial robots, from the construction of a pumping equipment manufacturing factory to universal brake tests (represented by ICL, Alfa Intekh, Modern Automatics, Kora, Avtoagregatcentre and even Chelny Water Supply Company). Before the plenary session, Artyom Zdunov and Natalia Kropotova looked over the exhibition of ''achievements of digital economy''

Artyom Zdunov: Strategy-2030 doesn't have digital economy now, this is why it's early to talk about its budget impact

Zdunov explained to us that our opponents in America and Europe actively used different tools including bails of intellectual property in banks, which is unavailable for our business now. Nevertheless, as far as it's known, Tatarstan continues investing in the development of non-resource-based, particularly, digital economy. But how long should we wait for the budget impact of these investments and what indicators of the digital economy in the structure of GRP do Tatarstan authorities expect in the nearest future? In answer to Realnoe Vremya's question, Artyom Zdunov did not name accurate numbers but explained why:

''A working group was created in the government to develop the digital economy, including the Ministry of Economy, Ministry of Industry and Trade and Ministry of Communications of Tatarstan because digital economy is not only some technological solutions. First of all, it is a solution how we can develop with big data, what sectors can arise. Enterprises can assess their client and enter new markets with access to big data. It is what many foreign companies are already using today. As for budget, I wouldn't separate a digital economy from a usual economy,'' the Tatarstan economy minister explained. ''It is implemented everywhere. Today one of the companies offered a solution in the Internet of Things: technological instructions of urban engineering are linked between each other and give information about work of meters and the energy system, in general. It is also a digital economy! Digital economy is not only IT development and communication. We need to show its possibilities in every enterprise, to every director.'' 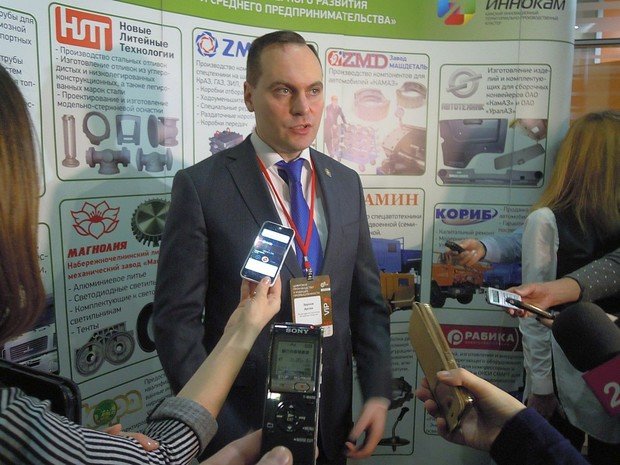 Zdunov explained to us that our opponents in America and Europe actively used different tools including bails of intellectual property in banks, which is unavailable for our business now

''It's not presupposed in Strategy-2030 in due volume,'' Artyom Zdunov admitted sadly. ''Now we're making amendments to the strategy, and there will be a separate powerful block on the digital economy. Then we can speak about the budget…''

It seems that for this reason the budget was not discussed at the plenary session (we can only guess how much the investments of Tatarstan in the digital economy will cost), but steps on the road to the glowing digital era was. The forum organisers paid attention that the current economic model was ''built to increase production efficiency by automation, without changing very technological processes''. And these processes can exist without IT, in fact. However, as a result of the fourth industrial revolution, ''IT will become the core of business and lead to an irreversible transformation in industry and business: all decisions in the digital economy will be made on the basis of IT possibilities and resources.''

In brief, ''the industrial Internet of Things is the technological basis for transition to a new paradigm, thanks to which a smart system will manage production in a real-time mode by cooperating with the global environment''. Ideally, all gadgets will feed back and make technological decisions by resetting production, and data will become the nucleus of the organisation. The minister assured the forum participants that they weren't going to mention issues of the digital economy either abstractedly or theoretically but stressing which platforms the digital economy should be applied in Tatarstan factories.

''Because there is a big number of platforms today. Talking about it, we understand that a competition between the platforms begins. Platforms come to us mainly from abroad,'' Zdunov did not hide his sadness about the delay. ''But our small and medium companies already have their own offers.''

However, there is a small chance that part of these platforms will come from abroad anyway or, more precisely, from Germany. German KUKA became one of the co-organisers of the forum, the exhibition was full of their robots, and top managers of this company were also sitting next to Zdunov at the panel session. It is clear that Tatarstan authorities are aimed to continue the cooperation with Germany. It should be reminded that this September it became known about the strategic partnership of KAMAZ with the German company (that includes direct robot supplies and the opening of a service centre in Naberezhnye Chelny). It's curious that the last time same KUKA's robots were installed was over 25 years ago, though the company was present in same Chelny industrial park as early as two years ago. German KUKA became one of the co-organisers of the forum, the exhibition was full of their robots

A person from Skolkovo or, more precisely, Pavel Bilenko, head of Industry 4.0 educational programmes of Corporate Education Department (Skolkovo, Moscow), was invited as moderator of the panel session. Bilenko reminded everyone that it was important to not only implement robots but also additive technologies (additive manufacturing technologies for making models that enable to speed up R&D and performance of tasks of production preparation; 3D printers are additive machines, for instance), and fast prototyping and digital logistics. He noticed that if processing or oil or gas producing companies were the most expensive 10 years ago, now companies linked with real production are in the lead. According to Bilenko, Amazon, Facebook, Microsoft, Alphabet should be considered so.

''A new trend appeared in 2016: a sudden fall in price for production equipment. Many production technologies, management systems, innovation components transform like it was at the end of the last century. Do you remember when huge computers were very expensive and it was difficult to use them for operational processes of a company in the 1980s? They cheapened in the early 21 st century and started to considerably exceed the 20-year-old computers in terms of productivity. The same thing is happening now to both unmanned cars and additive technologies. This trend means that it is profitable for us to use high technologies for production. As a result, even unmanned factories appear around the world,'' the Skolkovo representative revealed the wonderful fantastic future to the Kama businessmen and functionaries. Pavel Bilenko, head of Industry 4.0 educational programmes of Corporate Education Department of Skolkovo, was invited as moderator of the panel session. Photo: nabchelny.ru

Case for Marat Akhmetov: unmanned harvesting in England and what to do with freed labour force

Bilenko's team gathered 15 key components and automation systems of a modern enterprise to achieve it: automation of working places, additive manufacturing, digital engineering, capitalised intellectual property, etc. According to Bilenko, Industry 4.0 has over 100 technologies that managers could integrate into classic business processes even today. It's unclear now how Skolkovo is going to cooperate with SMB and give these key components.

The very Skolkovo manager put an example of a British experiment that was to interest Tatarstan Minister of Agriculture Marat Akhmetov who was absent: this September a British team gathered the first barley harvest in a hectare of land that people had never touched. The vehicles were managed from a remote centre – the Agriculturists' Palace could do it in Tatarstan. But what should farmers do? In addition, the technologies used by the British are available for everyone now, Bilenko stated. Energy conversion efficiency was comparable with energy conversion efficiency of an enterprise where people work. In answer to the question, which started to concert both the businessmen and functionaries, whether the number of working places would reduce and unemployment would grow with the implementation of robots and the digital economy, Sales Director of KUKA Robotics RUS Pyotr Smolentsev answered later:

''It's a global problem. But it's not as critical in Russia now as it's in Germany where the dismissal of employees due to the implementation of automatшщт systems is regulated at the legislative level. There are fantasies, Azimov's films where the high class of engineers manage robots and others go away. Yes, it's possible to have it in 100 years if it all is not managed! But now Russia has a very small number of qualified workers – both high and medium class. If metalworkers want to continue working (Editor's Note: after implementing robots and automated systems), nobody will dismiss them, they become operators because we will anyway need technologists who assess product quality and control it. For instance, in Germany, metalworkers who used to work manually hold a robot control console in their hands today, the robot does the job and they check the quality of welds. Russia doesn't have it and won't have it soon,'' Smolentsev concluded and cold-heartedly destroyed the illusion of a sudden and fast achievement of the digital era by Russia and Tatarstan.