Rustam Minnikhanov: ''In the absence of the Russian Constitution, regions took the initiative''

A festive event dedicated to the 25 th anniversary of the adoption of the Constitution of Tatarstan took place in the Saydashev State Big Concert Hall and united movers and shakers of the republic. During the event, they remembered what conditions the main law of Tatarstan was adopted in, and Tatarstan President Rustam Minnikhanov raised the question of the Tatar language learning at schools again. Realnoe Vremya tells the details.

The official day of adoption of the Constitution of Tatarstan is on 6 November. However, this year the festive event took place almost a fortnight earlier. Today the occasion in the Saydashev State Big Concert Hall became the biggest event linked with the memorable date. The celebration was private – by invitations for important representatives of power, business and religion only. In addition, for the guests, the event became a kind of ''family celebration'', a reason to meet: personal affairs and events that took place while the interlocutors did not meet were discussed behind the scenes.

An exposition of exhibits linked with the adoption of the Constitution of the Republic of Tatarstan was in the hall on the second floor. There were really unique things among them: for instance, the copy of the Constitution that first Tatarstan President Mintimer Shaimiev took an oath with or a fountain pen that he used to put his signature under the principal law of the republic. Tatarstan President Rustam Minnikhanov, State Adviser of the Republic of Tatarstan Mintimer Shaimiev, head of the Tatarstan State Council Farid Mukhametshin, Prime Minister of the republic Aleksey Pesoshin. An exposition of exhibits linked with the adoption of the Constitution of the Republic of Tatarstan was in the hall on the second floor. Photo: Aleksandr Artemyev

The very event started with a video dedicated to the adoption of the Constitution of the Republic of Tatarstan in 1992. ''Tatars from all over the world enthusiastically listened to the news from Tatarstan. There was no Internet yet, but the president's every word was at the top of the Russian media,'' the speaker tells about events of that time. Meanwhile, frames from the Freedom Square where demonstrators waited for the word ''independence'' in the era when the ''parade of sovereignties'' was popular were shown on the screen. And it all was accompanied by Mintimer Shaimiev's story about the creation of the principal law of the republic.

The video also mentioned one of the most important regional topics of the year – an agreement on delineation of powers between Tatarstan and the federal centre. The speaker in the video called the adoption of this agreement as a ''logical end of bilateral agreements''. Then first Russian President Boris Yeltsin's live speech was shown. ''What do you mean – to give Tatarstan all power? But that's not the point! Tatarstan needs to be given what it is entitled to have!'' he says.

However, the frames where Russian President Vladimir Putin was reading a speech in Tatar by the 1,000 th anniversary of Kazan caused a greater public reaction: ''For those who still begin learning the Tatar language and who did not understand everything, I would like to enlarge on one thought that has been mentioned,'' the head of Russia switched to Russian again. ''Kazan played a truly unrepeatable historical role in the formation of one Russian nation, creation of a multinational and united people of Russia.'' Then the hall just drew applause. The main part of the Tatarstan president's speech was also linked with the history of the adoption of the Constitution, but many people also waited for the topic of language problems to develop. Photo: prav.tatarstan.ru

Rustam Minnikhanov addressed the participants of the event with a welcome speech. The main part of the Tatarstan president's speech was also linked with the history of the adoption of the Constitution, but many people also waited for the topic of language problems to develop.

''The Constitution of Tatarstan was born in a complicated historical situation,'' Minnikhanov remembered. ''The destruction of the whole system of social relations created a real threat of an economic and political chaos, creation of a legal vacuum. A legislature for serious changes in the economic and political structure of society that happened was needed. Unfortunately, the activity of higher governing institutions of the country in the early 90s mainly was stopped by growing contradictions between different influence groups. In these conditions, in the absence of the Russian Constitution, regions, including our republic, took the initiative.''

The Tatarstan president emphasised that the commission on creation of the regional Constitution worked for two years, and ''the best movers and shakers of the republic and the country'' were in it.

The topic of teaching the Tatar language was finally raised. Moreover, this issue was directly linked with the Tatarstan Constitution. Unlike statements of the previous day, the speech was not so emotional but rather conciliatory. 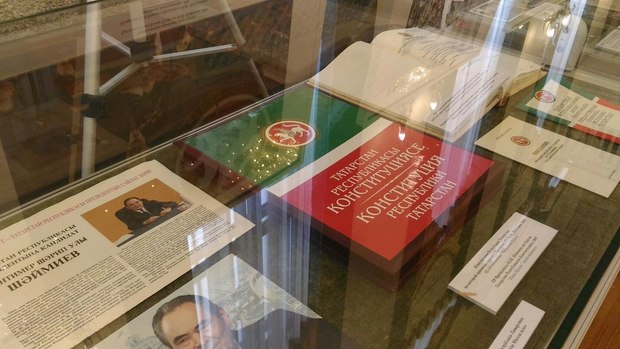 The Tatarstan president emphasised that the commission on creation of the regional Constitution worked for two years, and ''the best movers and shakers of the republic and the country'' were in it. Photo: Aleksandr Artemyev

''The provision of the Constitution of Tatarstan on attribution of the official status to the Tatar and Russian languages, which the majority of residents of the republic speaks, reflects the social consensus. The discussion that is taking place today shows the sensitivity and delicacy of this topic again. We need to admit that huge problems have accumulated in 30 years together with successes in national education. I'm convinced that we will come to an optimal solution of problems of learning and use of official and mother languages in accordance with constitutional rules.''

From the Tatarstan Constitution, Minnikhanov switched to the Russian Constitution and then to modern reality and, in addition, without forgetting to thank the national leader.

''Russia developed as a country with strong power uniting the space and peoples. The majority of Russians supports the all-out consolidation of the country's power and growth of its international authority. This strategic line is closely connected in the public consciousness with the personality of our multinational leader – Mr Vladimir Putin,'' Minnikhanov stated, after which the hall again applauded.

It seemed the solution of the language problem was postponed again, as well as one day earlier at the session of the Tatarstan State Council.