Escape from the City: weekend routes in Tatarstan. Day 6. Sightseeing attraction under water and non-flying weather

The sixth day of our trip we started in Bugulma. We drove there by accident. We were unable to cope with the desire to stay the night in a comfortable hotel. The tests of a tourist base failed. Calling the hotels in Bugulma, we asked them to tell us honestly – are there good conditions? In one of the hotels they told us — the best in the town. The price was reasonable, so the decision was made.

Bugulma was originally founded in 1736 as the village of Bolshaya Bugulma. On 23 December 1781, by decree of Catherine II it received the status of a district city of Ufa province. The city is a major diversified industrial, cultural and scientific center of the Republic. The city has an airport, a dozen of attractions, including very pleasant merchant buildings, and even McDonald's — the favorite feature of visitors.

In Bugulma, we had a very little plan. Our presenter Airat shocked us by saying that he wanted to buy the legendary Bugulma balsam drink in a bottle in the form of Švejk soldier. 'Is it really your dream?' we were surprised. Airat explained us that this book makes him nostalgic for the time when he was serving in the army. Though his service was, according to the army's standards, in wonderful conditions (near Kazan), the army shocked him, like any conscript. And 'The Good Soldier Švejk' that he read in the army, artistically describes all the absurdities of the service, at whatever time it was — at the beginning of the XX century or XXI century.

As it turned out, the Museum of Jaroslav Hašek was closed (it is closed on Sundays and Mondays), and, despite all efforts, we failed to find the balsam Bugulma. Also, we did not have the time for it – we were awaited. But if you visit Bugulma you should visit the Museum Hašek. His story is amazing: just in a couple of months that he spent here he loved Bugulma to such extent that he dedicated his works to it.

Our path headed to Sarmanovo, where we agreed to meet with Aleksey Gunko, a speleologist, who, probably, is the best in Tatarstan versed in caves and adits. On the way to him we made a small detour to look at the highest point of Tatarstan — Chatyr-Tau (Shatyor-Gora), literally the Tent Mountain. This mountain is 321.7 meters high and is located seven kilometers from Aznakaevo. It is, of course, not like Ararat or Mount Fuji. But anything that is higher than 200 m is called a mountain, and for the plains of Tatarstan Chatyr-Tau looks great. We did not go to its foot. In fact, it would be interesting if you are truly interested in the fauna of the Republic. Chatyr-Tau is a reserve, on the territory of which a colony of common (steppe) marmots lives, as well as the northern mole vole, Eversmann's hamster, gray dwarf hamster and the steppe lemming, for whom Chatyr-Tau is the northern border of the areal.

The Bakir-Tau, where we went further, also a mountain. It means 'copper' one. And it is because of copper we came here.

The Bakir-Tau — the name of the complex, which received its name due to the ancient copper mine. Copper was extracted here since immemorial times, most likely, by open method, but the mine appeared already in the XVII-XVIII centuries. There are different versions of its appearance. But the main thing that the serfs worked here in terrible conditions. Thus, the Sarmanovsky copper mine, in the first place, is a monument of the ore mining with a surprising and not entirely clear history. Its research continues, later there will be a museum. The entrance to the mine is so small that, standing upright, it is impossible to go inside. The entry height is only 90 cm. The total length of underground passages and tunnels is several kilometers.

Aleksey Gunko is one of the main people who popularises this place. He is a professional who has visited caves and adits around the world. He thinks the Sarmanovsky mine deserves a big tourist fate. Aleksey says Bakyr-Tau is interesting because of its labyrinthine paths, architecture and many galleries. Underground always marvellously attracts people. Markings that independent travellers like us or boys from Sarmanovo leave in the mine show it. Aleksey Gunko the Sarmanovo mine deserves a big tourist fate

But its history can be more curious for the majority of visitors. It is difficult to imagine how peasants managed to work in hellish conditions of the mine where it is difficult to rise to your full length in some places, not to mention pushing a cart with ore. There were many such mines across Tatarstan. Aleksey says it is wonderful to enter such a cave after miners who were here last time 100 years ago. Very simple and primitive tools that people used to work careless of their health are found here.

Aleksey has a clear vision how a museum should look like and when it is to be built. Functionaries have this plan. There is a concept based on Aleksey's design. The question when it happens is open. A similar 'professional' museum has already opened in Shugurovo. We told about it in the previous article. The Sarmanovo mine could become a point of interest for tourists, first of all, from Zakamye. Aleksey comes from Voronezh and arrived in Naberezhnye Chelny with his parents who came here to build KAMAZ. He is worried about Zakamye very much because there are no points of interest that would attract tourists except Yelabuga. Even such young cities as Chelny have their own history. Some sources say Srubna culture tribes settled down here from the 12 th century and in the 3rd century B.C. Excellent honey is made in Maltsevo village

We also witnessed that Zakamye doesn't have cinematographic points of interests. This is why we decided to finish our day after the visit to the great copper mine and have a rest in the Karimovs house. The Karimovs are beekeepers from Chelny. Excellent honey is made in Maltsevo village. Khalit Karimov asked us to come in June when fields bloom (he sows them himself with the best honey making plants). But expedition is expedition. When we came, the fields did not bloom, but the bees managed to make the May honey. Beekeepers usually don't manage to collect it. This time they did it. To tell the truth, our camera crew has not eaten anything yummier than this honey!

We went to Yelabuga to stay overnight. Here we will have enough points of interests. This is why we decided to spend in Yelabuga an entire day. Details are in the next series! 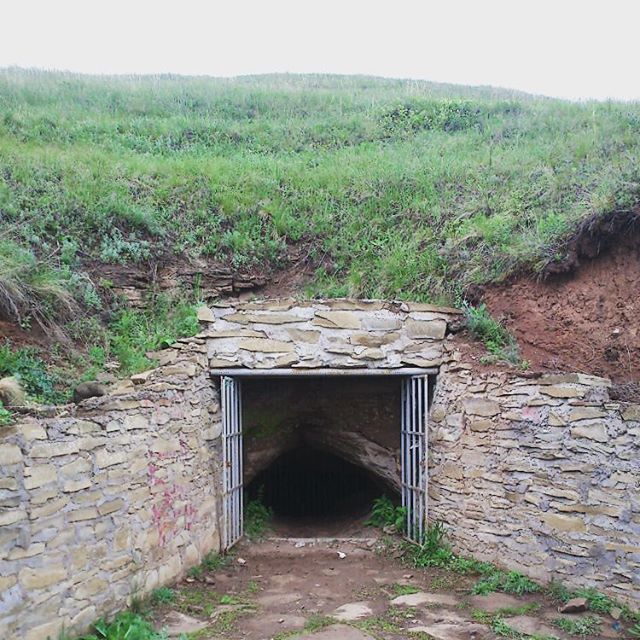