International panorama: Comandante Cherchesov, Romanian corruption and the height of the trade war

Former Soviet diplomat Yulduz Khaliullin about the absence of stability in the world. Series 19

Soviet and Russian diplomat Yulduz Khaliullin dedicated his new column in Realnoe Vremya to the events happening in Russia and the world. Our columnist shares his opinion about the 2018 World Cup, upcoming meeting of Putin and Trump in Helsinki and trade war started by Washington.

The World Cup in Russia has been in the spotlight for several weeks. The press highlighted the hospitality of Russia, receiving hundreds of thousands of fans, and excellent organization in host cities. Indeed, there are many positive messages.

I'm not a fan of football myself, and it's all over the news on dozens of channels today, so sometimes it's a little annoying. Moreover, Stanislav Cherchesov is compared to Comandante Che Guevara (have you seen this stylized drawing-meme?) — for the fact that the coach brought the Russian team to the playoffs, and then to the quarterfinals. Such things repel me.

From elections to scandals

Meanwhile, it is clear that other events are taking place in the world. The results of the presidential elections in Turkey passed our attention by. Recep Tayyip Erdoğan has strengthened his position. He's been running the country for almost 20 years. Now Turkey is increasingly becoming a presidential republic. After the first reports that Erdoğan and his Justice and Development Party was winning, Prime Minister Binali Yildirim joked that his chair would have to be put up for auction.

In any case, Erdoğan's victory has a positive impact on Russian-Turkish relations. At the same time, Ankara has difficulties in relations with the United States, the European Union and the Arab world. The problem of problems — the Kurdish issue: the Kurds live on the territory of the current conflict areas of Iraq and Syria. 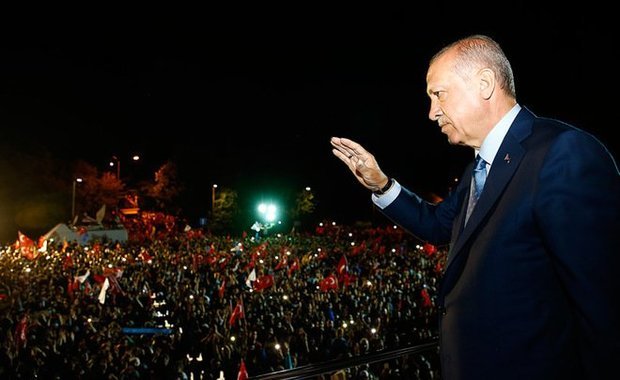 Another point which our newspapers paid attention to. I served in Romania for four years and I have followed the events in this Eastern European country very closely. There was a corruption scandal at the highest level. Endless rallies in Bucharest and other cities are a sign of instability in one of the important countries in the Balkans.

The elections in Mexico were not particularly discussed either. New President López Obrador said he would seek to establish relations with the United States in the framework of friendship and cooperation and will make every effort to eradicate crime and drug trafficking. The criminal situation in Mexico is very difficult. Even during the election campaign, dozens of parliamentary candidates were killed. This is a new phenomenon for Mexico, one of the largest countries in Latin America.

Besides, the direct talks of US Secretary of State Mike Pompeo began in Pyongyang on what was agreed on June 12 in Singapore by Donald Trump and Kim Jong-un. Americans want concretization.

According to the South Korean media, Pompeo may set the conditions for the North Korean leader: to issue a full list of nuclear facilities — the number of warheads, their location, information about when they are planned to be eliminated. I don't think it would be possible to solve this in one go. But the process has already been started — this is an important point in the US-North Korean relations. ''Direct talks of US Secretary of State Mike Pompeo began in Pyongyang on what was agreed on June 12 in Singapore by Donald Trump and Kim Jong-un (on the photo). Americans want concretization.'' Photo: iarex.ru

In anticipation of the meeting of Putin and Trump

Almost immediately after the 2018 World Cup, the attention of the world community, as they have said before, will be focused on Helsinki. On July 16, the capital of Finland hosts the summit of the presidents of Russia and the USA. It is said that hundreds of hotel rooms have alreayd been reserved by correspondents and observers of leading publications. Certainly, according to the statements of the two presidents' advisers, the current state and prospects of development of relations between Moscow and Washington will be discussed at the large-format meeting. It is assumed that there will be a brief joint statement and possible press conference of the two presidents. The talks will address local issues in Syria, Ukraine and global issues.

I think this is a positive phenomenon — long hours of negotiations between the presidents after the US media, the Senate, the Congress discussed some kind of Russian interference in the US elections. All this remained idle chatter. Of course, now it is necessary to get out of this situation for President Trump himself on the threshold of partial elections to the Congress and the Senate at the end of this year. He needs to strengthen the position of Republican-Conservatives somehow.

People around the world are confused by Trump's position on international trade. The current US president started a trade war outside the World Trade Organization, violating its principles. The association includes more than 160 states. Of course, not all states comply with the WTO principles, but such a sharp violation, dictation on certain articles of export-import had not existed earlier.

The trade war began six months ago and is conducted between three leading centres of world politics and economy — the US, EU, China. To a lesser extent it will affect Russia, which exports oil, gas, aluminum. These issues will probably also be considered at the meeting in Helsinki.

On July 6, a new stage of the trade war began. Americans impose 20-25% duties on Chinese goods in the amount of about $50 billion. According to the foreign press, the list includes more than 800 types of products: cars, automotive components, computers, mobile phones, TVs and other popular products. Americans impose 20-25% duties on Chinese goods in the amount of about $50 billion. Photo: Reuters/Aly Song

The information that Trump allegedly asked his employees who are engaged in this issue to determine the list of Chinese goods for $200 billion that could be imposed an additional 10% tariff leaked to the press. Last year, China's total imports to the US amounted to about $500 billion.

This situation is beginning to worry some United States commercial and industrial circles, as it will make some adjustments to the export of American goods, in particular, to China. Beijing purchases technology, agricultural products (90% of American export products made from soy beans go to China), seafood from Washington. Moreover, the Chinese annually invest more than $1 billion in the latest US technologies. Trump's actions can weaken the desire of the Chinese to invest in American IT industry.

The International Monetary Fund expressed concern about the White House policy: it can have unpleasant consequences outside the economies of the leading powers — the US and China.

The world is being on the eve of a shift: such drastic actions against world trade should be suspended. Trump knows how to do it. Economic, financial and political relations should be developed further.