End of era: why Messi and Ronaldo won’t become the best any more

End of Messi and Ronaldo's era

Leo Messi and Cristiano Ronaldo left the 2018 WC on the same day, and many people started to talk about the end of the era of the two greatest players of modern time immediately. In a column written for Realnoe Vremya, popular commentator Vitaly Oshovsky tells why these talks are absolutely reasonable.

30 June 2018 will be remembered in history of football for ever. Lionel Messi was out of the tournament together with the national team of Argentina at 19.00. However, Ronaldo's fans weren't glad for long: the Portuguese were eliminated from the WC precisely 4 hours later. And now a paradoxical situation can be observed in all social networks now: Messi and Ronaldo's fans are posting pictures where their idols sadly hug each other. There aren't eternal debates who is cooler nay more – there is only regret the era of Ron and Leo made a very huge step to the finishing line.

Several journalists at once asked Hugo Lloris about the duel of Messi and Kylian Mbappé before the match between Argentina and France. He said Leo couldn't be compared to other football players, he's unique. But if Mbappé will work hard and play well, he will be able to reach his level, France's goalkeeper replied. Kylian smashed the defence of the national team of Argentina almost on the next day, got a penalty and performed a double. Messi played a good match and even had two successful assists. But people say for a reason: Leo is the only player in the world who can be criticised for not making a miracle.

''In this tournament, Lionel lacked freshness as nobody else. He has a very hard season at Barcelona behind, which he also works almost on his own,'' Sergey Kiryakov claimed. In this respect, it was easier for Mbappé because he has Cavani, Di Maria and Neymar at PSG. And PSG doesn't have rivals in the Championship of France. Messi played a good match and even had two successful assists. But people say for a reason: Leo is the only player in the world who can be criticised for not making a miracle

Mbappé could have a break this spring to show off at this WC at times. A miracle is expected from Messi in every match. And if nothing happens, bashing starts. His mother Celia Cuccittini admitted Leo was a wonderful person with big heart. She says sometimes he takes criticism to heart. Sometimes she sees him suffer and cry, and it's painful for her to accept it because she knows how he loves his country.

Number of haters of Messi grows even in Argentina

Another question that's actively discussed among fans is whether Messi is the best or 'one of the many'. Many people choose the second option in Leo's homeland after the elimination of the national team of Argentina. Moreover, the number of his haters also skyrockets. Famous Argentinean coach Ricardo Lombardi claimed Messi 'absorbed' the eighth coach. There is a feeling he played badly deliberately to put pressure on Sampaoli. Messi should be expulsed from the squad. He doesn't care about anything, he plays against the head coach. Lionel always wants to be surrounded by the players he likes, not the best players.

Indeed, there is a serious piece of truth in his words: an episode in the 80 th minute in the match with Nigeria showed it when Sampaoli asked Messi's permission to field Agüero.

Before this tournament, the 'alien' had a unique chance to become absolutely the best player in the world. But due to several reasons, he didn't take advantage, which caused a new wave of talks about the insufficient greatness of Leo in comparison with Maradona. The majority thinks Messi can't be better than Diego without a victory at WC. Meanwhile, opponents insist that football was much slower in the 80s, and there were less really cool players (especially defenders). Due to the failure of Messi at the 2018 WC, it won't be possible to come to a single opinion. The elimination of the national team of Argentina doomed us to eternal debates about Messi and Maradona. 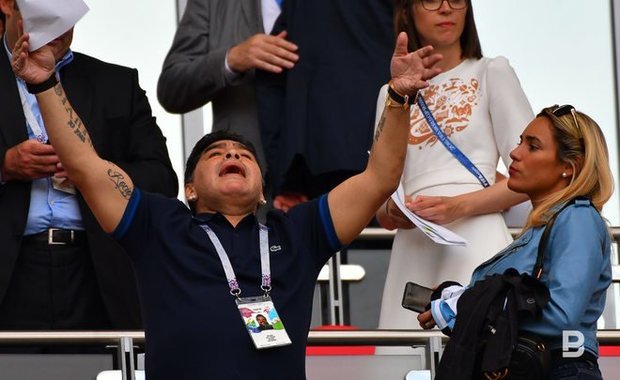 Visual impressions often play a key role among fans with regard to 'who is cooler'. Here, as a rule, any mathematics doesn't work. Ronaldo can have 8 Ballon d'Ors in a row. He won 2016 Euro and three Champions Leagues in a row. However, Leo is called the genius of modern football anyway. And completely different characteristics of these players is the point. Even 'semi-alive' Messi almost lost the match with the Frenchman with the help of his 'genius'. While Ronaldo, first if all, is a machine for scoring goals, an incredible athlete. Apart from the different game style, they have diametrically different character. But if Leo hadn't stopped in 2015 and continued getting one Ballon d'Or after another, it would have been possible to confidently speak about his supremacy over Ronaldo. But Messi lost his chance here too: at this moment, their Ballon d'Or score is 5-5!

Two great players left the WC in one phase and on one day. Ronaldo will be remembered in this tournament for his hat-trick in the goal of one of the favourites – the national team of Spain, while Messi – for an amazing assist in the match with Nigeria. This all just proves that football is a team game, Rio Ferdinand said well. In yesterday's match with Uruguay, we saw how smart team actions and the highest concentration of the defence were able to neutralise even the legendary Portuguese. Cristiano was constantly in the centre of attack. However, he has never (!) received a ball in the rival's penalty area. And it becomes more complicated for Ronaldo to regularly reach the penalty area, look for the ball due to his 'old age'.

Who breathes down their necks

It's highly likely that after the 2018 WC neither Leo nor Cris will receive the sixth Ballon d'Or. Same Mbappé not only is on their heels – there is a feeling he is about to go ahead of the two giants. Messi's downed eyes after the third goal of the Frenchmen by Mbappé is a kind of delegation of power. Ronaldo can have 8 Ballon d'Ors in a row. He won 2016 Euro and three Champions Leagues in a row. However, Leo is called the genius of modern football anyway

Samuel Eto'o affirms Mbappé is going to change Messi soon. If he, of course, is able to manage his status well. To have an excellent career, it's necessary to consider a variety of things not linked with football. So the French player hopes he will be able to talk with Mbappé one day. Kylian can follow Messi's example – a person with incredible power of will.

Not only Mbappé is ready to shift Leo and Cris this season already. Mohamed Salah looks no less bright in the first half of the year. Neymar who will be the main candidate for Ballon d'Or if Brazil wins the WC is getting shape after a serious injury. Moreover, forwards Harry Kane, Eden Hazard and Romelu Lukaku are able to really surprise the world. They all, except Salah, are ready to break the hegemony of Ronaldo and Messi right now.

There won't be any hot debates about which of the giants is cooler any more. Instead, we will be witnesses of the union of fans of Cris and Leo more often. With sad memories of their former greatness.