''The bond between the Tatars and Japan is very ancient.'' What did Tatarstan president pray for in Kobe?

Experts about the influence of Tatars on traditions of the Land of the Rising Sun: the first mosque, Rustam Minnikhanov’s visit and even… Samurai swords

The Tatarstan president has visited the first Muslim temple in the city of Kobe during his visit to Japan. Experts of Realnoe Vremya talk about what salah Rustam Minnikhanov conducted at the mosque, which was founded by Tatars who emigrated from Soviet Russia 100 years ago, on 7 October means.

Tatar Samurai, or from sword to Islam

During a two-day business visit, Rustam Minnikhanov will visit three Japanese cities – Kyoto, Kobe, Kanazawa. And his main goal is to participate in Science and Technologies in Society forum. However, apart from the participation in the plenary session of the forum, there were scheduled several business meetings and talks, a visit to Riken biomedical cluster and a factory manufacturing conveyor and sorting equipment. But this very busy schedule had room for a visit presupposing no hurry and concentration…

''Japan is very important for Tatarstan as a partner, it has high technologies, it has investments,'' thinks Vice-President of the Tatarstan Academy of Sciences Rafael Khakimov. ''And it's a standard scheme when the president, first of all, deals with economic issues. But he simultaneously meets with the Tatar diaspora in any country. Of course, that ''revolutionary'' Tatar diaspora has already disappeared in Japan – many people left the country, as emigrants in Japan weren't granted citizenship. The Tatars going to the mosque the president visited are up-to-date, our Kazan Tatars, who often pay business visits to Japan. And Muslims living in Kobe, not the Tatars, are the most constant visitors of the mosque. Their number has grown now, which is a joy.'' 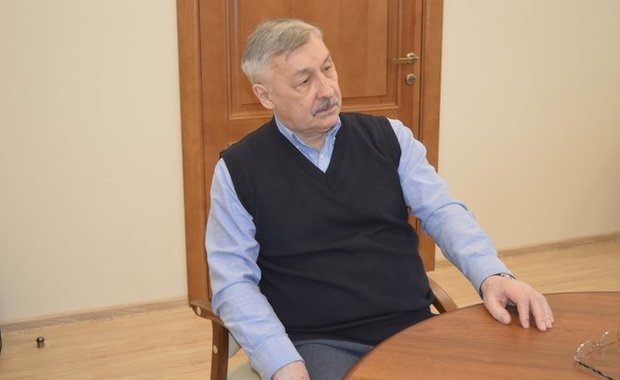 ''Japan is very important for Tatarstan as a partner, it has high technologies, it has investments,'' thinks Vice-President of the Tatarstan Academy of Sciences Rafael Khakimov. Photo: Timur Rakhmatullin

Khakimov supposes it's hard to overestimate the meaning of this mosque not only for the Tatar diaspora existing in Japan in the past century but the whole Muslim world, in general:

''The bond between the Tatars and Japan is very ancient. I went to Japanese Shimane Prefecture, I looked at how Samurai swords were forged… Tatars brought these technologies, they've being used since the 7 th century. Islam came to Japan right after the construction of the mosque in Kobe, a Muslim community appeared there.''

No Tatars left in Kobe, but there is prospect

Associate Professor of the Faculty of Philosophy of Russian State University for the Humanities Larisa Usmanova who does research of the history of Muslim emigration in Japan told Realnoe Vremya about the history of the construction of the mosque in Kobe.

''The emigration of Tatars to Japan began in the early 20 th century. However, the major flow of emigrants increased in the 1920s,'' Usmanova told. ''And Kobe was a port city, it has always had many foreigners, and a big Muslim community has always lived there. In 1909, Abdu-Rashit Ibragimov (Editor's Note: a preacher, supporter of Pan-Islamism) agreed with the country's government on the possibility of building a mosque there.'' The construction of the mosque in Kobe, which was initiated by representatives of the Tatar diaspora in 1927, was completed in 1935. Photo: tatarstan.ru

Consequently, she says, the Tatars built three mosques in Japan, including the big temple in Tokyo. But one of them, in Nagoya, was wooden and burnt as a result of the US bombardment in 1946. The other, in Tokyo, was dismantled in the 80s of the last century due to dangerous wreckages in the foundation and was re-built in 2000 but by Turks. And the construction of the mosque in Kobe, which was initiated by representatives of the Tatar diaspora in 1927, was completed in 1935. And this mosque not only survived the US bombardments but has remained really Tatar.

''Now there is almost no representative of the former Tatar elite in Kobe, while the current imam of the mosque is of Pakistan origin,'' Usmanova specified. ''However, the last Tatar imam Rakib Kilka's son's widow still lives there. She's Tatar but was born in Harbin.''

The researcher who studies the history of Tatars' emigration to Japan thinks the visit of Rustam Minnikhanov to the mosque to Kobe will have at least two positive consequences:

''Firstly, it's very important for both history of the Tatar people, in general, and many Tatar families who collect information about their ancestors around the world: numerous documents about Tatar emigration to Japan and its representatives are stored at the mosque of Kobe. Secondly, the Tatarstan president's visit is very important for Tatarstan-Japanese relations: other regions of Russia aren't linked with Japan. Japan was very careful about foreigners. However, the Turkic-Tatar diaspora was not only accepted there but also given a chance to build a mosque, open a national school in it and teach in the Tatar language at this school.'' Visit is good, but long-term results are better

''The president of Tatarstan quite actively visits big countries. Certain economic agreements usually become a result of such visits,'' correspondent member of the International Eurasian Economic Academy, director of the IEEA in Moscow Yulduz Khaliullin noted in a talk with Realnoe Vremya's correspondent about Rustam Minnikhanov's visit. ''And it's not only a big advantage for Tatarstan but also Russia to a certain degree. And the visit to one of the small Japanese mosques by people from Russia, from Tatarstan is a certain sign for local Muslims. It can be considered a certain advantage from a perspective of international feedback. I think it's very important for them – they are remembered outside Japan.''

Khaliullin highly appreciated the prospects opening in the light of the Tatarstan president's visit for Tatarstan entrepreneurs who're interested in cooperation with Japan and supposed that there might be signed certain agreements during the visit that would define the relationships of the countries and enterprises in the long term:

''It happened so at least when Minnikhanov was in Punjab, in Pakistan, several years ago. I'd like this visit to bring such a result. And I'd also like to know how the signed agreements are fulfilled – in such cases, it's necessary to publicly cover not only the agreements with other countries but the results of their fulfilment.''