Kazanorgsintez in the first half of 2018: profit growth by 20%

The output increase has borne fruit to Kazanorgsintez PJSC. In the first half of 2018, the company made a profit of 10 billion rubles, which was higher than the result in the same period last year by 20%. The company's revenue also showed a positive result. It increased by more than 6% and reached 39,1 billion rubles. At the same time, experts link the successful results of Kazanorgsintez with the growth of prices for thermoplastics in Russia, specifying that the increase began in the second quarter of 2018. Read the details in the material of Realnoe Vremya.

Kazanorgsintez, one of the leading enterprises of the petrochemical complex of Russia, part of TAIF Group, summed up the results of the first six months of 2018. Over this period, the company made a profit of 10 billion rubles, which was higher than the result for the same period last year by 20%. The revenue compared to last year increased by more than 6% and as of 1 July 2018 reached 39,1 billion rubles. KOS's profit amounted to 10 billion rubles in the first half of 2018. Photo: press service of Kazanorgsintez PJSC

The assets of Kazanorgsintez in the first half of the year amounted to 63,7 billion rubles, and the cost of fixed assets — 35,8 billion rubles.

Kazanorgsintez increased profit and revenue primarily due to the growth of production volumes. The company has been steadily increasing its production over the past years. Last year, Kazanorgsintez achieved record figures for the production of polyethylene in the history of its activity. In 2017, the volume of low-pressure polyethylene reached 508 million tonnes. In 2017, the production of low-pressure polyethylene at Kazanorgsintez reached 508 million tonnes

The economic activity of the enterprise was positively affected by the conditions in the market of polyethylene: stabilization and growth of prices for products, changes in the exchange rate. ''A decline in prices for polyethylene occurred in 2016: within three quarters, they fell by 15-20%, in the fourth quarter, the prices began to grow slightly. In 2017, prices have not reached the level of 2016 yet, although they grew by 10%. We can say that now the price of polyethylene has stabilized,'' Director General of Kazanorgsintez PJSC Farid Minigulov told in an interview with Realnoe Vremya.

High prospects in the market

Experts also positively assess the dynamics of Kazanorgsintez development in the petrochemical market of Russia.

''Kazanorgsintez PJSC is the most profitable enterprise in the sector of domestic petrochemical industry. In recent years, large investments have been made in the company and now they should bring returns. Unfortunately, our Russian stock market is underestimated, liquidity is little and a small number of blue chips are concentrated on it — Gazprom, Lukoil, Sberbank and others. But I hope that sooner or later the sanctions will be eased or lifted up, money will come, and then papers of the second tier, including KOS's, will rise in price more than the chips.''

''Major changes in the polyethylene market over the last six months — rising prices. The weakening of the ruble in the second quarter and the rise in oil prices in dollars, as usual, have benefited Russian petrochemicals, so the second quarter of 2018 looks for Kazanorgsintez more successful. If you look at the price index for plastics, the growth is observed from mid-2017, in late spring-early summer it accelerated. Prices for thermoplastics in the first half of 2018 increased by 21,5% compared to the same period last year. 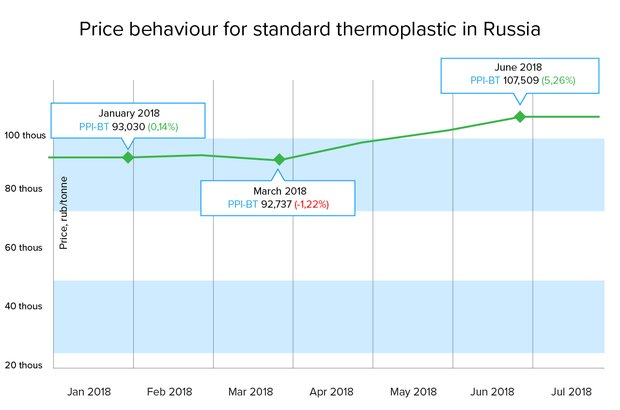 I do not think this trend will continue in the future. For the growth it is necessary to maintain the same conditions. It is unlikely that there will be an increase in oil prices and a weakening of the ruble. Most likely, prices will stabilize and there will be a slight decline in the third-fourth quarter of 2018. This is also indicated by the price for thermoplastics in July: there is already a decline, and this is only the beginning. Of course, the reverse decline of 16% will not happen, but a certain fall is likely.

As for the situation with suppliers in the market, the new Ukrainian producer of polyethylene will definitely not be regard as competitor to the products of Kazanorgsintez. There is competition from SIBUR, which is gradually increasing its capacity. But we should understand that in Russia the demand for plastics is growing quite fast. We have one person who consumes three times less plastics than in Europe. Therefore, in the long term it is a growing market. There is a strategy for the development of the chemical industry, approved by the government, it is expected to double-triple the growth of consumption and production of plastics by 2030.