What Kazan streets will be closed during football WC matches

An additional temporary terminal at the airport, free shuttles to Kazan Arena from railway stations and hundreds of buses to deliver fans – the capital of Tatarstan has almost prepared its transport infrastructure by the Football World Cup. On 19 April, it was told where drivers should leave their cars during matches and how fans would be transported after competitions while Realnoe Vremya made up a top 8 facts enabling to prepare for the big event better.

Another terminal – a temporary one – has been built at the Kazan international airport in the expectation of the Football World Cup. It will provide an additional traffic capacity of 320 passengers per hour during the competition, thus making the total traffic capacity reach 1,800 people per hours. Apart from Bus 197, which is to circulate every 20 minutes, there will be a train for 1,200 passengers from the railway station to the airport and vice versa every hour on match days. A ride will be free with a match ticket and FAN ID or accreditation for FIFA client groups.

In addition, special shuttles will go from the airport to Kazan Arena and Sports Palace. 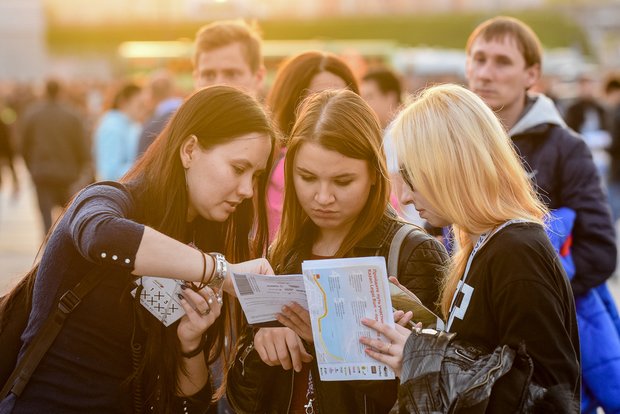 How to get to stadium from stations

The fans who arrived in Kazan at the central railway station will be welcomed by volunteers, and a specially installed transport navigation will help to get your bearings on your own.

The circulation of 60 trains for departure and 48 for arrival will be organised at the station. And almost all tickets to them have already been booked.

''The transport directorate of the world cup launched a site to book tickets to the new trains. According to the latest data, nowadays about 80% of tickets to Kazan have already been booked,'' director of the Transport and Logistics Administration of the Tatarstan Ministry of Transport and Road Aleksey Sidorov told at a press conference in Tatar-Inform information agency.

Kazan-2 railway station doesn't expect the full load during the competition like the central one. But volunteers will welcome guests too. 48 special shuttles with symbols of the WC will transport from both stations to the stadium or, more precisely, to Adoratsky stop. They will circulate through Kremlin and Kozya Sloboda metro stations, while a ride there will be absolutely free for all passengers. How public transport will circulate

After matches on 20, 24 June and 6 July, which begin at 9 pm, end, the metro and land public transport whose route goes along Kazan Arena will work for three hours more. And about 400 buses, 23 trams and 10 trolleybuses will be used to transport fans after the matches. Authorities also cared about transportation of spectators from the places next to Kazan Family Centre from Power Engineering University stop and Kozya Sloboda metro station. Urban routes going through these stops will work until midnight from 14 June to 14 July.

Due to the action of the ''last mile'' during the competitions, it won't be possible to approach Kazan Arena again. Public transport will go to Veterinary Academy and Adoratsky Street on Yamasheva from where fans will have to go to the stadium or the next stop to go on foot for transfer.

Deputy Chairman of the Transport Committee of the Executive Committee of Kazan Marat Khisamutdinov assured that information in all urban transport was given in three languages – Russian, Tatar and English, while drivers and conductors would be provided with a kit. In addition, it turned out that transport availability and comfort for disabled people was provided 100% in the metro, Kazan buses and trolleybuses. In the case with trams, the situation seems to be more real. According to Khisamutdinov, 77% of them are equipped for the category of citizens with limited mobility. What to do with car drivers

Car drivers are recommended to refuse cars on match days and use public transport. Eight park-and-ride sites, which is mainly a name for parking of big shopping and leisure centres, were designed for them. In total, they will accommodate 11,430 cars.

By the way, the ''last mile'', which inevitably leads to big traffic jams in the city due to its restrictions, will include Chistopolskaya, Sibgat Khakim Streets unlike at the Confederations Cup. It's possible to reach Kazan Arena from the Cup on these streets. The roads will be closed for free traffic of fans.

We should remind that the ''last mile'' will come into force four hours to a match and end three hours after it finishes.

Is it possible to leave a bicycle next to the stadium?

The drivers who left their car on a park-and-ride site will be able to get a bicycle for free next to Kozya Sloboda metro station from 15 April. For this, they will need to show a parking card and sign an agreement. The drivers will also be able to use this right during the WC.

If ordinary residents won't be able to park near Kazan Arena on match days, the entrance for bicycles is open. And authorities assure that there will be enough room for bicycle lovers. You should pay attention that it will be possible to use public transport free on match days only if you have a ticket to the stadium and FAN ID. If you don't have at least one of the documents, there will no sense in hoping for a free ride.

Apart from fans, volunteers and people included in FIFA lists have the right to travel free. Moreover, if the right to travel free during the Confederations Cup started to be applied one month to the competitions and ended a month after it, the rules at the WC changed by reducing the free ride right after the championship. Instead of a month, the right will be given just for 10 days.

No problem with food delivery

It is supposed that the entrance to the city for trucks will be closed during the WC. A corresponding resolution will be published only on 4 May. But food associations already started to be afraid that the restrictions would cause food delivery failures. However, Kazan doesn't expect such problems.

''I offer to wait for the publication of this resolution, look what parts these restrictions will be applied in, when. The restrictions are imposed for cars whose weight is more than 5 tonnes. But we have experience of the Confederations Cup, there weren't such problems. And I think we will be able to avoid these problems during the Football World Cup too,'' Kazan Marat Khisamutdinov assured in answer to Realnoe Vremya's question. Taxi drivers to be accredited

A voluntary accreditation of taxi drivers whom volunteers, hotel and café workers will advise will be organised by the competition in Kazan. There will be special requirements for them – minimal foreign language skills of both drivers and dispatchers, air conditioning, climate control in the car, etc.

This won't affect such systems as Uber, Yandex, Gett. They will be able to continue their work as usual. Without the accreditation, of course.