''When society is involved in digital economy, the concept of private life can’t exist''

It was thought how to transform the digital economy at a strategic session in Kazan State Power Engineering University on 25 April. Having invited specialists from different universities, experts divided into four groups and presented all options to develop the digital economy in Tatarstan, which will be offered to include in Strategy-2030 development programme of the republic. While some people thought about security and long overdue changes in the legal base, others offered to divide education into elite and mass and expressed their opinion about private life in the era of digitalisation. Realnoe Vremya tells the details.

The first group of experts thought what conditions needed to be created to digitally transform the economy and came to a conclusion that they were created in Tatarstan, though ''they could be better''. Speaking about it, moderator of the group, head of the department Informatics and Information Management Systems of Kazan State Power Engineering University Yulia Torkunova started to enumerate existing conditions in the republic: there were possibilities to prepare personnel, industrial clusters developed, and innovative infrastructure was created. But a digital transformation also needs the country's support in legal regulation, development of digital infrastructure and help in the sphere of education for the IT cluster, think the specialists.

Other groups were a bit clearer in their conclusions due to either the tasks, which were set, or other specifics. Moderator of the second team head of the Department of Management of Kazan State Power Engineering University Roman Timofeyev told about the formation of a new regulatory environment, which would provide a favourable legal regime for the appearance, development and use of technologies. The specialists summed up that they should develop game rules first, only then follow these rules.

To start with, the specialists offered to consider the problems of creation of the concept of digital transformation in the nearest future, a legislative basis would be created for it. In answer to a question from the hall, Timofeyev explained the digital transformation concept meant a road map with defined key points. Then they talked about private data protection in conditions of the digital economy. ''Could you tell if current legislation doesn't allow to protect personal data? There is a federal law on personal data protection,'' Director of the Institute of Digital Technologies and Economy of KSPEU Yury Smirnov specified.

''The question is very good and serious. In addition, I'd probably say that as a result of the formation of the road map, we should pay great attention to those regulatory bases that exist in the USA, EU countries, etc.'' Timofeyev replied evasively. He reminded that America started to talk about a digital economy in 1993. And now, despite tough relationship of Russia with the USA, the latter has sensible solutions that need to be applied here as well. At last, the speaker urged to create standards considering the real situation, otherwise the invented mechanisms won't work.

Technological independence as key to security

Having agreed with his colleague on the necessity to create a legislative basis with regard to the real state of affairs, moderator of the third group Yury Smirnov started to talk about drivers of development and growth of the digital transformation of the economy. They began to speak about digital networks, the capacity of data processing and storage centres, educational and research infrastructure, digital platforms and technologies, investment mechanisms and provision of favourable conditions for regional development centres: IT parks, science cities and enterprises.

After switching to scientific research, Smirnov defined 13 points that include both robotisation of production and development of cloud technologies and the Internet of Things. The third point was about information security. And during the discussion, it turned out that its standards were almost absent in the republic. Their creation became the first point in recommendations in this category. The others were about independence to create information security.

''We get hardware from the West, a big amount of software is built in it that isn't subject to decoding, and this causes a very big problem,'' noticed the director of the Institute of Digital Technologies and Economy of KSPEU. He explained they found technological independence of hardware operations as well as a technology to provide sustainability and security of digital networks.

Another sphere that requires attention is providing the operation of certification of information systems. According to Smirnov, the majority of used software isn't certified and validated. 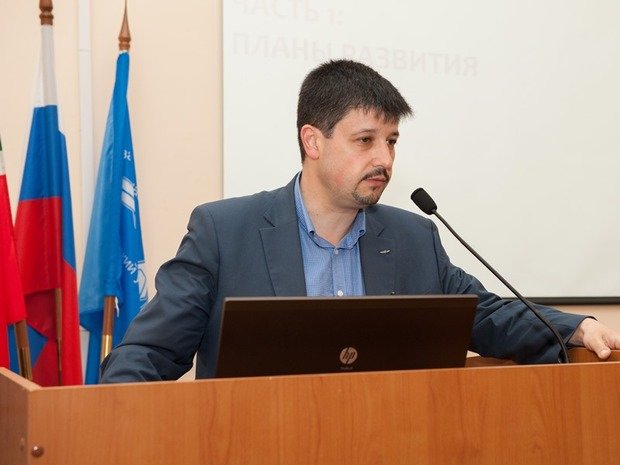 Aleksey Lopatin: ''If a person is involved in this system, he leaves digital traces. We all publish photos in social networks, somebody praised himself many times, somebody discredited. The question is who has these data.'' Photo: kai.ru

''If a person is involved in this system, he leaves digital traces''

To talk about personnel, Director of the Institute of Aviation, Land Transport and Power Engineering, head of Reactive Engines and Power Plants of the Kazan Aviation Institute Aleksey Lopatin went on the stage. He immediately defined four major tasks that the participants of his working group set for themselves. It's reproduction, attraction, conservation and development of human capital. Moreover, 30% were given to the first three points each in percentages, only 10% — to development. And, in Lopatin's opinion, now the 10% are absent in the republic.

The working group offered to work in such spheres as medicine, education and ecology, so that Tatarstan IT specialists stopped migrating to Moscow and Saint Petersburg where more attractive conditions are offered. In health, the specialists offered to develop telemedicine with the use of artificial intelligence and also look at additive technologies, which, in Lopatin's opinion, would enable to observe at the moment where the first operating parts for successful transplantation would be printed on a 3D printer. Then there was modernisation of new materials, accent on legal regulation of IT security, service, multifunctional centres and big data centres. According to the expert's words, the latter already became a part of our life.

''We face it with you everywhere. Try to type the word '' yoghurt'' in search on the Internet. Then you will be constantly offered it. We were sold with you a long time ago and many times. Sometimes a surprising feeling arises when you don't write but say something on the phone, and an ad comes some time later. Then big data flow processing issues are the key to everything,'' thinks Lopatin. Back to medicine, the speaker noticed that big data technologies would help to process a big flow of data, thus reducing the load on the existing medical network.

Aleksey Lopatin couldn't help but also express his opinion about personal data protection, what the previous speakers talked about. According to his estimate, the scientist from the KAI was quite categorical.

''I think in the situation when society is quite seriously involved in the digital economy, the concept of private life can't exist. We need to forget it. If a person is involved in this system, he leaves digital traces. We all publish photos in social networks, somebody praised himself many times, somebody discredited. The question is who has these data,'' the speaker expressed his personal opinion and concluded, ''It's a matter of time when something becomes known.'' In case of ecology, specialists offered to use mass design of technological processes like nuclear weapon by refusing full-scale tests. Photo: mert.tatarstan.ru

To make education elite and mass, while ecology – transparent

Switching to education, he announced an offer of all participants of the fourth group. Firstly, to open common access to laboratories between universities. The second measure looks more cardinal. Education was offered to be divided into elite and mass, which inevitably happens anyway, in the specialists' opinion, in the era of digitalisation of the economy. An elite category means full-time education in conditions of well-equipped laboratories. While mass education can perform the function of socialisation and can be limited to obtaining certain skills to do a job.

In case of ecology, specialists offered to use the mass design of technological processes like a nuclear weapon by refusing full-scale tests, especially in industrial spheres that do serious harm to ecology. Moreover, people themselves need to be informed about the state of the environment, which, the group's members think, can cultivate a careful attitude to nature.

Having heard the last speaker out, Yury Smirnov took the microphone in his hand. This time he did it to make a remark about education, which, in his opinion, has a common strategic problem – non-compliance of educational and professional standards.

''Part of professional standards was written very badly. And preparation of specialists with them in accordance with state educational standards is impossible. There is a huge contradiction between them,'' Smirnov noticed.

In answer, Aleksey Lopatin admitted that it was, undoubtedly, necessary to raise such questions. But at the same time, he disagreed with the interlocutor. Their agreement or disagreement with educational standards is a personal opinion, and their thoughts could be sent to the Ministry of Education. And the group had a specific task at the moment – to create mechanisms to develop human capital in Tatarstan, what they did, in fact.

All offered measures for the good of the digital economy were explained in detail in the resolution of the strategic session and complemented online directly during the discussion. But this is not the end. It's planned to gather the specialists again at KSPEU in May to discuss the measures designed to improve Strategy-2030 again.