Kaliningrad: sea of sightseeing points, expensive taxi and flat for 100K per night

Before the WC, Kaliningrad had a stadium with a capacity of 16,000 spectators, which was built by Germans in 1892. It goes without saying that it didn't comply with FIFA requirements. And in 2015, it was decided to build a new arena, which got a simple name Kaliningrad Stadium. The arena is located on Oktyabrsky island on the River Staraya Pregolya's left bank. In fact, it is the city centre.

It is said the concept of Munich Allianz Arena, which hosted 2006 WC matches, was the basis of the project. The stadium has two floors. In the corners, it has three zones for ice, water and team sports, including a fourth one – for combat sports. It was thought first the arena's capacity will be 45,000. However, due to some difficulties during construction, it reduced by 10,000 seats. Two parking zones, which are able to accommodate about 7,200 cars, are supposed be near the stadium. 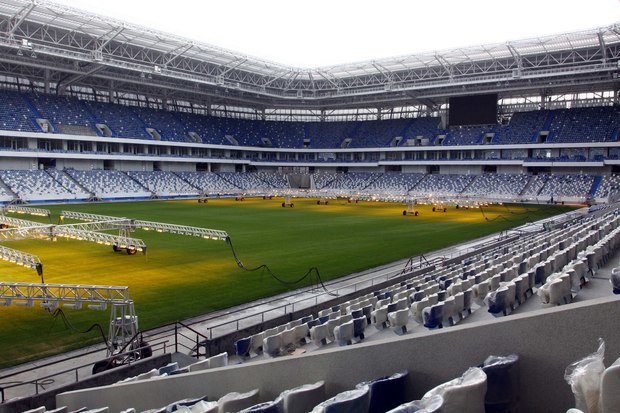 This February, it became known the commission of international inspectors found numerous faults at the Kaliningrad stadium (Rostov Arena faced an analogous problem). According to Life.ru, the commission that arrived in Kaliningrad with inspection was indignant when it found out the ventilation system for equipment wasn't switched on during the inspection, which means there is no hot meal at the whole stadium.

As for other complaints, the doorways were so narrow that it wasn't possible to carry sponsors' fridges through them, and constructors didn't use not-slip material, like FIFA required, when laying floor. There also were found problems with electrics.

Right after the departure of the FIFA representatives, Vice-President on Sport, Tourism and Youth Policy Vitaly Mutko charged with correcting all faults they had found during the inspection. There are three ways to get Kaliningrad: by water, air and railway. Plans land at Khrabrovo airport, which is 17 km far from the city (shuttles go to the city every hour). Long and short distance trains are served by the main station of the city Kaliningrad-Yuzhny (it's not far from Oktyabrsky island).

There isn't accurate information about how to get the stadium on public transport, as the transport infrastructure is still created. According to God2018.com, passers-by can reach the stop Veterans' Embankment on Buses 40, 46 and 47 or Bus 72 till Fish Village stop.

We shouldn't forget about the existence of taxi. Uber doesn't operate in Kaliningrad yet. However, it is said the service will be finally launched on the threshold of the Football WC. Now you can certainly use Yandex.Taxi (a trip from the airport to the stadium will cost some 500 rubles) or a big number of local services. Kaliningrad has a huge number of hotels, guest houses and hostels. However, there is a serious problem, which is characteristic of all WC host cities – almost all rooms on match days have already been bought or booked. Nevertheless, you still have a chance to get a free room.

For instance, you can check the availability in cheap and quite cosy hotel Patriot located not far from the Botanical garden. Rooms in Hostel Anastasia, KoikaGo, Deime, Friedrichshof, Oberteich Lux and hostel Koenig Home will be cheap. One can pay attention to the inexpensive hotel Kotbus – it takes just 15 minutes to reach from Kaliningrad's centre. There is a good European class hotel Albertina 20 minutes far from the centre. In terms of infrastructural convenience, the hotel Golden Bay, Apartment, Like Hostel, hotel Olympic, On Kashtanova and apartments on Pobeda Square can be noticed.

The availability of the enumerated options can be checked on Booking.com or official pages of the hotels. One can also look for flats and rooms on Airbnb: a one-bedroomed flat can be found for 8,000 per night. However, there are just cosmic options for 114,000 rubles per night. Kaliningrad is a tiny (15,000 sq. m) part of Russia located on the Baltic Sea shore. The city was founded in 1255 by the Teutonic Order and then passed from hand to hand. After WWII, a third of East Prussia became part of the USSR, while Königsberg Russified quickly. Modern Kaliningrad has things to look at: European architecture, old mansions, very interesting museums, parks and sculptures.

People say one should acquaint the city from Kant Island – it was one of the first independent settlements around Königsberg fortress. Being there, you shouldn't lose a chance to visit the Sculpture Park – a surprising open-air museum. Apart from monuments to famous workers of culture, you will meet famous Fighting aurochs – it's a place where all citizens meet. The Cathedral is another point of attraction, the grave of German philosopher Immanuel Kant is near its walls.

You should also go to Amalienau – one of the three German districts in Kaliningrad, which almost hasn't changed. To see interesting architecture, you can also go to another district – Maraunenhof. The Church of the Holy Family built in remote 1907 is another sightseeing point. The ruins of the Königsberg Castle also attract tourists coming to Kaliningrad. As for museums, tourists should visit first the famous Amber Museum and Fort No. 5, which is called a marvel of fortification in the 19 th century. You can also go with kids to the Kaliningrad zoo (located on the territory of the former Königsberg zoo founded by a German entrepreneur in 1896) or botanical garden. To have a rest with family, Youth park is also recommended: apart from picturesque views, you will find a number of amusement rides, Upside Down House, viewing wheel, carting centre and ship station.

You have the time in store, you can go to the westernmost city of the Russian Federation – Baltiysk. It's located in the northern part of the Vistula Spit 50 km far from Kaliningrad (Bus 107 or by EMU). A luxury beach can be found in Yantarny settlement.

To start with, let's enumerate several restaurants for every day: the official 2018 WC portal advises establishment Bo-Bo (urban café on the embankment with a view on the water), Croissant (a chain café with breakfast, lunch, different soups, grilled fish, pasta, crepes and another tasty food), Lozhka and Povaryoshka (self-service café with a low price tag).

To taste national Ukrainian cuisine, you can go to Borsch and Salo, German cuisine can be found in Reduit, Kaiser Wurst and Tetka Fischer. Austrian cuisine is in Tirol. Italian cuisine is present in Parmesan, Papasha Beppe, Bravo Italia and Pepperoncino. If you suddenly want to taste Czech cuisine, go to U Gashek.