Let's reduce to the full, or How US shale oilers going to hit Nail Maganov

In 2018, Tatneft plans to reduce oil production to 561 barrels per day as part of its obligations under the OPEC+ agreement. The previous stage of the production containment pact benefited the company, but this year it will be more difficult for the company, like for other Russian exporters. This is the US to blame, as well as the own last year's achievements. Read more in the material of Realnoe Vremya.

OPEC is losing power over prices

The Central dispatch management of fuel and energy complex (CDU, a budget institution established by the Ministry of Energy of the Russian Federation) has published data on the reduction of oil production in February. According to it, the majority of Russian companies have reduced the production under the OPEC+ cartel agreement.

Neftegazkholding and Gazprom Neft have reduced monthly production the most — by 21,4% and 13,7% respectively. LUKOIL's production in February reduced by 12,5%, Russneft's — by 11,9%, Surgutneftegas's — by 12,1%. Tatneft reduced its monthly production by 12,3% and the company's average daily production decreased by 2,8%. Neftegazkholding and Gazprom Neft have reduced monthly production the most — by 21,4% and 13,7% respectively. Photo: gazprom-neft.ru

For Tatneft, as well as other Russian companies, it won't be as comfortable as before to fulfill the obligations under OPEC+ in 2018. The first reason is the prices. Last year, the decision to reduce the production supported the oil price. The average price per barrel of the Russian brand Urals in 2017 increased by 26,6% — to $53,03 against $41,9 in 2016.

However, according to Felipe De La Rosa, portfolio manager at General Invest, such a significant price increase should not be expected in the near future — most likely, this year the price will remain in the acceptable for OPEC+ range of $55-56 per barrel.

''In terms of prices, the effect from limiting the production [in 2017] was quite strong. As for the extension of the agreement: it is enough to say that if right now cancelled and everyone starts to pump to the maximum, then almost immediately there will be a surplus on the market, and prices will collapse,'' says Vasily Tanurkov from ACRA.

At the same time, there is no question of hope that prices will continue to grow simply because of the agreement, he believes. This is not facilitated by a growth of shale oil production in the United States — although the global market is absorbing this growth so far while maintaining the necessary deficit.

A reduction is no joke

The second reason why the year 2018 will be more difficult than the previous — it is a real, not formal reduction in oil production. Despite the fact that Tatneft began to fulfil the obligations to curb oil production already last January, according to the results of 2017, the volume of production has only increased. Over 12 months of 2017, the group produced 28,93 million tonnes of oil — by 0,9% more than in 2016. 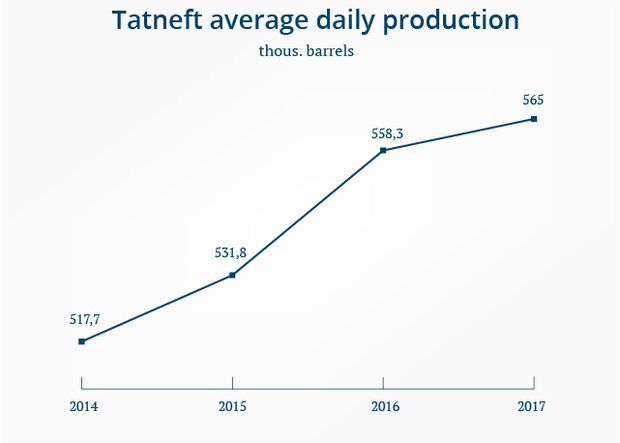 According to the presentation for investors published in December last year, this year the company will continue to reduce oil production, but this time the actual volume of production at the end of the year will actually decrease. However, a decrease will be insignificant — by 0,6% compared to the level of 2017. While last year the average daily production across the Tatneft group was at the level of 565 barrels (28,92 million tonnes per year), then in 2018, according to the presentation, it should decrease to 561 barrels (28,74 million tonnes per year). Last month, all companies of Tatneft group produced 2,44 million tonnes of oil — compared to January 2017 the volume of production decreased by 2,3%.

According to Vasily Tanurkov, previously, not only the high base of October 2016 played in favour of oilers, but also the fact that the OPEC pact assumed not one-time but gradual reduction in production. This allowed Russian companies to pump more oil in the first months after the agreement came into force. As a result, the average daily production in Russia only increased.

However, in 2018, this effect has exhausted itself, and now the production level is really being in a state of freezing. This year is not leap, so there won't even a calendar advantage. Thus, the volume of production of some companies may decrease.

The same has been said by director of the analytical department at Alpari Alexander Razuvaev: since in 2016 oil production in Russia had been at a high level, in 2017 Russian companies felt at ease. ''Our oilers more won from oil rate growth than lost from unprocessed volumes. The prices here were older.'' Now the effect of the previous high base is passing, and prices are more influenced by geopolitics, a growth of shale oil production in the United States and a likely increase in interest rates by the Federal Reserve System. ''The year 2018 is going to be less comfortable,'' Razuvayev sums up. ''The main question is how to get out of this agreement [OPEC+]. If to imagine that at the end of 2018 the agreement immediately becomes invalid — and the market is likely to know about it beforehand — the prices will fall quite sharply,'' Tanurkov warns.

Tatneft did not respond to the request of Realnoe Vremya.