Kazanorgsintez to pack polymers into its own product

Production of FFS multilayer tubular film to pack polymer products began at Kazanorgsintez. Tatarstan President Rustam Minnikhanov, Director General of TAIF PJSC Albert Shigabutdinov, Chairman of the Board of Directors of Kazanorgsintez PJSC Ruslan Shigabutdinov and Rafkat Kantyukov, director general of Gazprom Transgaz Kazan PLC, launched the new production site. The capacities that were put into operation will cover the enterprise's needs for packaging, and KOS won't need to purchase it in another place. In addition, the new equipment will enable to use only its own feedstock. Realnoe Vremya tells the details.

From foreign-made bags to its own modern packaging

Kazanorgsintez launched a new production site – FFS multilayer tubular film production. From a perspective of the scale of the huge enterprise, the shop seems small: just two machines. However, production will enable to cover all KOS factories' needs for flexible packaging in the short run. 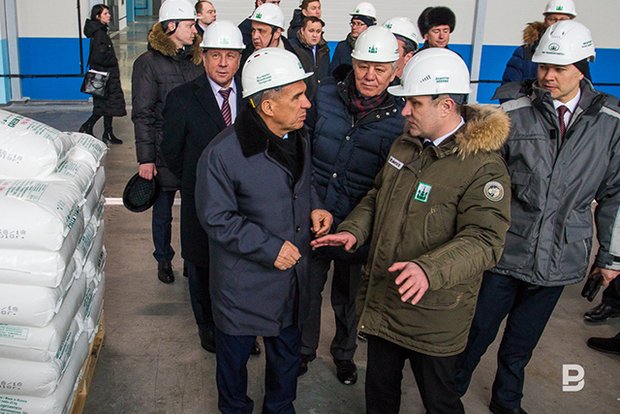 The enterprise made its own bags for products before too

The enterprise made its own bags for products before too. However, after re-equipping several factories in the late 2000s, they had to partially refuse this packaging. New packaging machines of KOS factories enabled to pack up to 2,000 bags per hour. Old film production technologies couldn't provide with either necessary volumes or the quality that's needed for such fast packaging. FFS multilayer tubular film production (shaping, filling, tightening). 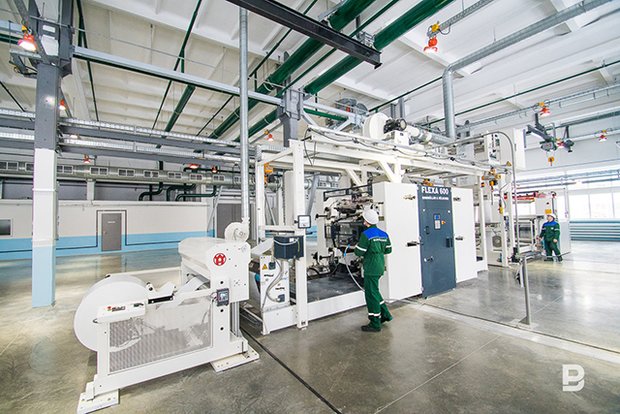 ''Polymerisation, end product packaging capacities have been gradually expanded since 2004. This is why we gradually refused to produce the film and started to purchase it in another place. We purchased foreign-made packaging first, then we switched to Russian suppliers. But even if this film is local, mainly imported feedstock is used,'' explained Rustem Muzafarov, director of Low-Density Polyethylene Production and Processing Plant, during the excursion in the factory. In general, all enterprises of TAIF Group of Companies need 10,000 tonnes of packaging film a year

''In general, all enterprises of TAIF Group of Companies need 10,000 tonnes of packaging film a year. Today we're launching production whose fulfilment took less than a year thanks to well-oiled and accurate work of designers and builders. Kazanorgsintez is a big manufacturer of polymers in TAIF Group of Companies, rubbers and needs to have good standard packaging.''

How to economise 51 million rubles on polyethylene bags?

Old room was reconstructed, and German equipment was bought made deliberately for KOS for the new production site: Reifenhauser Blown Film unit for film production and Windmoller&Holsher machine for marking. The total volume of investments was 316 million rubles. The project's fulfilment began in late 2015: a contract with firms on production and delivery of equipment was signed then. The very factory was created several months beforehand, in summer 2017. Their own material and feedstock from Nizhnekamskneftekhim will be used to produce FFS multilayer tubular film.

''It's the first FFS multilayer tubular film production line, production capacity will be 2,590 tonnes a year or 16 million linear metres. We will reduce costs on packaging, and the economic effect will exceed 51 million rubles a year – we will produce themselves and use our own feedstock,'' said Rustem Muzafarov. 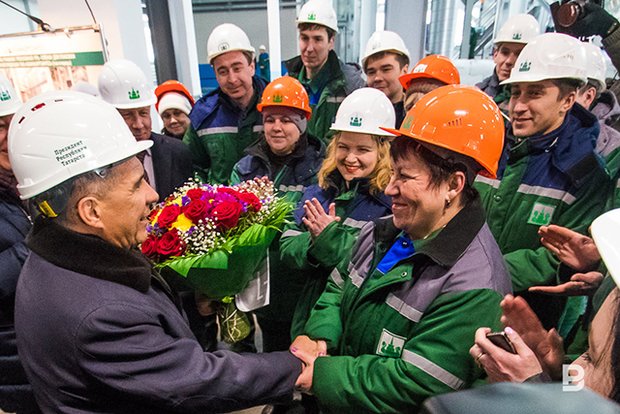 While looking the factory over, Rustam Minnikhanov took several photos of the equipment on his phone, asked about the country that had supplied the machine tools. Having known the technology was German, the Tatarstan president noticed that Danaflex also used machine tools from Germany. When leaving the shop, Rustam Minnikhanov was surrounded by female factory workers whom the head of the republic congratulated on upcoming 8 March. Rustam Minnikhanov presented a bunch of flowers to one of the Kazanorgsintez workers – Nadezhda Kudryashova – and congratulated her on the 55 th jubilee. The president was surprised the woman's employment history in the enterprise was 34 years.

At the press conference that took place after the excursion, Rustam Minnikhanov told that the guests looked over the course of construction of Technip's four-compartment furnace.

''Kazanorgsintez is the leading enterprise of the petrochemical sector of the Russian Federation with decent indicators. We've just visited the construction site of four pyrolysis furnaces. It's the latest furnaces that will substitute 10 old furnaces,'' noted the president of the republic. 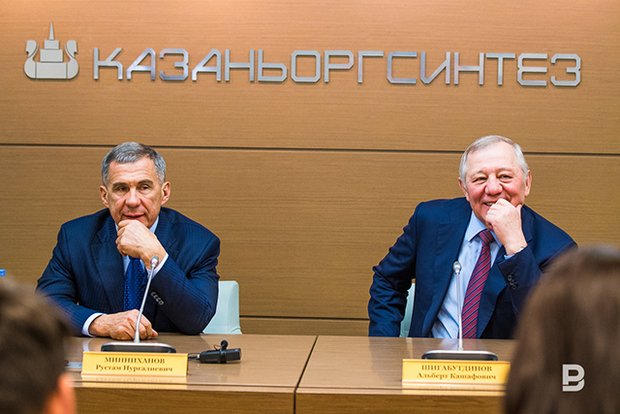 The new four pyrolysis furnaces with a capacity of 72 tonnes per hour will substitute 10 old furnaces whose total capacity was only 66 tonnes per hour. Due to this, production of marketable ethylene will increase to 19,000 tonnes a year considering previous feedstock volumes. After launching the furnaces, it's also planned to increase the conversion of ethane and propane as feedstock. It will enable to pay 3,45 billion rubles of investments back for 4,5 years. They are going to start commissioning in 2018.

Plans for the future and feedstock problem

After visiting production shops, Rustam Minnikhanov noted that Kazanorgsintez was an enterprise with a rich history, and it's surprising how tidy it was, there was no smell on its territory, which tells about eco-friendliness of the factory. The head of the republic shared plans for the development of production capacities of Kazanorgsintez. According to him, they're linked to the solution of feedstock and electricity supply problem. 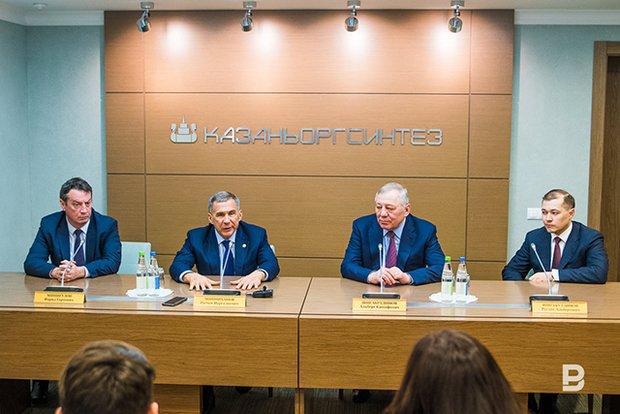 ''We've discussed our future plans at Kazanorgsintez. But as they require confidentiality, we can't share them today. But it's clear that Kazanorgsintez's mid-term perspective is to reach production of one million tonnes of polyethylene and one million tonnes of ethylene. There are all possibilities for it: a well thought out strategy, chosen technologies, designed financial schemes. It's not just some ideas, hopes, it's thought out issues. We're very glad to have discussed it today. Mr Kantyukov (Editor's Note: director general of Gazprom Transgaz Kazan PLC) is here with us today because Orenburg is the major feedstock supplier for the enterprise. All system works thanks to Gazprom Transgaz Kazan,'' Rustam Minnikhanov claimed. He also insinuated the plans of Kazanorgsintez to use production residues to get electricity.

The problem of feedstock deficit in the enterprise, which is topical for Kazanorgsintez, was also discussed. Farid Minigulov told the journalists that they managed to increase ethane supply by 1520%. It became possible thanks to cooperation with Gazprom Transgaz Kazan. This year the enterprise hopes for the same growth of feedstock supply. However, Kazanorgsintez's capacities won't be fully loaded with ethane. ''There is still a deficit of ethane: about 80,000 tonnes are needed. Now we're reconstructing pyrolysis furnaces to have a technical possibility to use imported feedstock, for example, propane instead of lacking ethane,'' the Kazanorgsintez director general shared plans for 2018.