The ceremonial opening of the monument to Shihabetdin Marjani took place on the lakeside of the Kaban Lake on 20 November. The sculpture was created basing on the plaster bust of the thinker, made by artist Baki Urmanche — now it is stored in his museum. The republican and city authorities spent almost 40 million rubles for the creation and installation of the monument. The descendants of Marjani were also invited to the opening ceremony of the monument. They complained that the house of their great ancestor on the other side of the street was ''a little ruined''. Read the details in the material of Realnoe Vremya.

The snow-white monument to Shihabetdin Marjani was made basing on the plaster bust, which was created by Tatar artist Baki Urmanche. The original is stored in the museum of the painter, and the marble sculpture by this model has been created by modern artist Ramin Nafikov. By the way, he also attended the event, but behaved modestly, did not speak into the microphone and approached the monument after the guests almost dispersed.

We asked the artist whether he was satisfied with how the monument had been installed, because he was a little upset that it was impossible to catch a faint smile when one looked in the eyes of the scholar from below. Here our conversation was joined by ex-mayor of Kazan Kamil Iskhakov, who now heads the Bolgarian Islamic Academy and is an assistant to the president of Tatarstan, adviser to the first deputy head of the presidential administration of Russia.

''He looks smart, attentive, looking as if at us. It is not stone — you have revived him,'' Iskhakov smiled.

''No, it is Urmanche who has revived him — I repeated. If you look at him from the same level, he also has another smile – sly one,'' the artist modestly retorted.

Talking with the reporter of Realnoe Vremya, Nafikov noted that the location of the monument is successful because it is not too high. The artist said that they worked on the monument already in 2013-2014, ''It had been created earlier, not for installation here. Then, when it was ready, they saw it and decided to install.'' 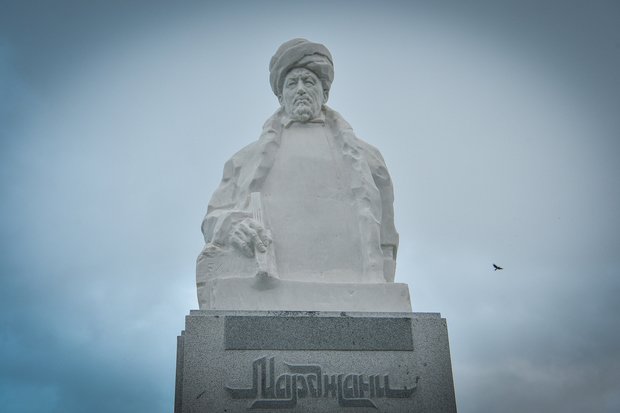 The snow-white monument to Shihabetdin Marjani was made basing on the plaster bust, created by Tatar artist Baki Urmanche

Originally, the sculpture was created by an order of the Marjani Foundation, headed by famous philanthropist Rustam Suleymanov, and the son of Baki Urmanche — Aydar Urmanche. In 2015, Tatarstan bought the monument from Aydar Urmanche. According to information on the public procurement website, 11 million rubles were allocated from the budget of Tatarstan for this purpose. The tender for the installation and improvement was announced only at the end of October 2018. The purchase at 28,7 million rubles was financed from the Kazan budget.

''The installation of the monument had probably been discussed for already more than 10 years. This is a logical outcome of what had been conceived long ago, especially since the monument is stunning. It is, in principle, the initiative of the public in many ways. The last decision applies to installation, improvement. The monument had been created earlier, it had stood without purpose for a long time. In 2015, the first stage was held, and the improvement was carried out in 2018,'' explained Minister of Culture of Tatarstan Irada Ayupova.

President of Tatarstan Rustam Minnikhanov also attended the opening of Marjani monument. He congratulated everyone on the holiday of Mawlid and stressed that the installation of the monument to the Tatar enlightener coincided with the birthday of Prophet Muhammad.

''This year marks the 200-year anniversary of Shihabetdin Marjani. He left his mark thanks to his works, glorified the Tatar people around the world. This sculpture, the image of Marjani was created by the great Baki Urmanche, and this monument here, in the Staro-Tatarskaya Sloboda, will be a good gift,'' said Minnikhanov.

The ceremony was attended by first president of Tatarstan, now adviser Mintimer Shaimiev. He noted that during the construction of the Bolgarian Academy, as well as at its opening, many foreign guests with admiration and gratitude talked about the Tatar figures of that era, but at the same time, their heritage is not fully studied. Mintimer Shaimiev reminded that many tourists come to Kazan both from foreign countries and from Russian regions. Now we need to show them the monument to Marjani and briefly, but succinctly tell about the Tatar scientist and educator. Mintimer Shaimiev noted that during the construction of the Bolgarian Academy, as well as at its opening, many foreign guests with admiration and gratitude talked about the Tatar figures of that era, but at the same time, their heritage is not fully studied

From the point of view of tourist routes, the location for the monument is quite successful, considering that on the other side of the street there is Al Marjani Mosque and Staro-Tatarskaya Sloboda. Apparently, the name of the Tatar scientist on the pedestal was written in Russian with an eye to receiving tourists. There was space for nothing else except ''Marjani'' — neither the name nor an inscription in Tatar.

''That's what I was thinking about on the way here. Let's look at the monument to Qol Ghali,'' said Mintimer Shaimiev, turning towards the monument. ''Qol Ghali is a poet who lived and worked in Bolgar. At the same time, Shihabetdin Marjani has a two-volume fundamental work about Kazan and Bolgar. We need to enlighten about this because there was a lot of controversy. Even in our time, how many disputes there are being between the muftis. At the same time, he wrote about the problems of philosophy, religious issues. Marjani wrote his thoughts and his opinions about the same Galilei, who suffered the Inquisition. He reflected on how the Earth moves — around the Sun or the Sun moves around the Earth. It is right thing that we have erected the monument to Qol Ghali by the millenium of teh city of Kazan. Our monuments stand next to each other — it is the role of destiny,'' said Mintimer Shaimiev.

He added that it was no coincidence that the monument was installed near the Galiaskar Kamal Tatar Academic Theatre. The thing is that Marjani was also interested in music, in particular, he wrote about what kind of music does not contradict Islam. Let us note that among the people who attended the event there were many theatre members: theatre's director Ilfir Yakupov, actors Azgar Shakirov, Ildar Khayrullin, Fanis Ziganshin — the latter hosted the opening ceremony.

The monument was erected, but the house was forgotted

It is noteworthy that the event was attended by a lot of religious leaders, including imams and shakirds. Let us remind that the idea to establish a monument to Marjani also had opponents, who said that Islam does not welcome the installation of statues. Even before the event, we talked with imam-khatib of Al Marjani Mosque Mansur khazrat Dzhalyaletdinov.

''He's our famous scientist. I want to emphasize that even in many foreign countries, for example, in Turkey, according to the books of Shihabetdin Marjani, his textbooks are taught, his works are read. He wrote more than 30 books. In Soviet times, his legacy was not studied at all. I rejoice that the name of Marjani is perpetuated, his heritage is being studied,'' he said.

Chairman of the MSB RT Kamil Samigullin also came to the opening of the Marjani monument. In his speech, he stressed the importance of learning the native language and heritage.

''Shihabetdin Marjani wrote about how the Koran was published in Kazan. His books were published several times in Jordan, Turkey. His works are read and recognized. Marjani once said that there are three things that are not related to religion but preserve it — customs, traditional clothing and language. If we keep these things, they'll keep our religion,'' he said. ''Marjani once said that there are three things that are not related to religion but preserve it — customs, traditional clothing and language. If we keep these things, they'll keep our religion,'' Kamil Samigullin said

''Both Fatima and Gaysha — grandchildren of Marjani, children of younger daughter Khava. I myself lived here next door in the 44th house, which belonged to Khava. I see it's a little ruined now. I would like to live there and now, if it was possible,'' she said in a naive and childish way.

Although the wish could probably be perceived as a subtle hint. But, alas, any live response and promises to restore the house didn't follow. The wooden structure is included in the list of objects of cultural heritage of regional significance as ''the house of Bagautdinova(Marjani)-Apanaeva, 1873''. We would like to note that ''it is a little ruined'' — it is putting it mildly, considering that the 100-year-old house on Marjani, 44 in the spring of last year endured a fire, of which vagrants were accused. Probably, it would be possible to perpetuate the name of the Tatar scientist by preserving the existing monuments.

According to Gulzada Mustafina, the house was built in 1873. After the death of Shihabetdin Marjani, it passed to his younger daughter Khava. As the great-great-granddaughter of the educator told, among Marjani's descendants there were many scientists, candidates of sciences, mathematicians, geographers. In particular, his son Mahmut Marjani translated Hadji Murad by Tolstoy from Russian. Gulzada Mustafina worked as an engineer at the enterprise Terneftemahs for 36 years.