Why do Renault and Rostec need complete control over AvtoVAZ?

100% of the car concern will be in the hands of one company. It’s one of the rehabilitation stages of AvtoVAZ, which has been generating losses for five years

Renault and Rostec's joint enterprise will purchase the last shares of AvtoVAZ and minority shareholders, thus becoming the only owner of the car concern. It can be considered one of the financial rehabilitation stages of the company, which got over 160bn rubles of losses in 2013-2017. Experts note that the company's business has worsened in recent time, though it's early to talk about a full recovery. Realnoe Vremya tells the details.

Alliance Rostec Auto B.V – major holder of AvtoVAZ registered in Amsterdam – sent the minority shareholders of the concern on 15 October a preliminary offer to purchase their shares. According to AvtoVAZ's message on the page, all types of shares will be bought, the list of the current shareholders will be made up on 30 November.

The bidder has fixed the purchase price: 12,4 rubles for a common stock and 12,2 for a preferred one. It's a bit more expensive than the market price for the shares on the day before the offer was made (then common stocks cost 12,15 rubles, preferred stocks were 12 rubles). According to AvtoVAZ's press service director Sergey Ilyinsky, the price had foundation – it was fixed according to legislation and complete control of the Central Bank.

Alliance Rostec Auto B.V is a joint enterprise of Renault and Rostec. Now this company is a 96,6% owner of AvtoVAZ. Its ownership has recently been smaller. However, the joint enterprise additionally purchased 13% of shares within another offer in late September. 1,5bn shares of minority shareholders were purchased in total. When commenting on the previous offer, Chairman of AvtoVAZ Board of Directors Sergey Skvortsov said the augmentation of the share of Alliance Rostec Auto B. was a ''logical continuation of the recapitalisation process during which the enterprise was cleared of debts at over 100bn rubles''. Photo: rostec.ru

In the current offer, the joint enterprise will purchase the rest of the shares left in minority shareholders' shares and become the only owner of the factory, Ilyinsky says.

When commenting on the previous offer, Chairman of AvtoVAZ Board of Directors Sergey Skvortsov said the augmentation of the share of Alliance Rostec Auto B. was a ''logical continuation of the recapitalisation process during which the enterprise was cleared of debts at over 100bn rubles''.

The recapitalisation, Skvortsov talked about, began two years ago – for the car factory's financial recovery. It included several stages: in late 2016, AvtoVAZ raised the capital through an additional issue of shares. And the shares have been converted into the concern's debts at over 60bn rubles this year (Alliance Rostec Auto B.V became the owner of these shares).

So the final consolidation of 100% of shares is one of the recapitalisation stages. In September, Rostec Director General Sergey Chemezov claimed the car would carry out delisting and leave Moscow Exchange after the recovery (when we pay off loans). ''Then we will see what to do next,'' he added.

Other indicators of the company have also improved. In the first half of 2018, IFRS revenue increased by 31,5% — to 134,7bn rubles. In addition, the concern got 3,1bn rubles of profit – for the first time in a long period. AvtoVAZ had been previously generating losses for five years. The biggest loss was in 2015 (73,9bn rubles), and the total loss in 2013-2017 exceeded 161bn rubles.

This June, the concern changed its director – French-born Nicolas Maure, who ruled the company for two years, was substituted by his compatriot Yves Caracatzanis. The departure of Maure was linked with his appointment as director of a regional division of Renault. However, some experts simultaneously noted Maure simply accomplished his mission on clearance of debts. 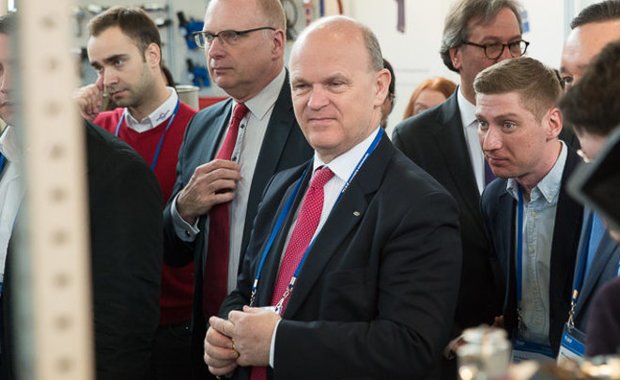 The departure of Maure was linked with his appointment as director of regional division of Renault. Photo: Maksim Platonov

''The enterprise is still unprofitable, but it's promising''

Experts say the situation of AvtoVAZ is recovering gradually, though it's early to talk about a full recovery.

Editor-in-Chief of AvtoBusinessReview magazine Evgeny Yeskov remembers that the story with a search for an investor began as early as the 2000s. As for the concern's situation, some improvement is seen here. ''There is positive dynamics, sales in Russia grow, there is also growth in foreign markets, export development. A new product line yields a result,'' Yeskov says. ''In any case, there is change to the better in sales and the financial state in the last years. The enterprise is still unprofitable, but it's promising.''

Now AvtoVAZ is successfully updating its production line, new Lada cars have entered the market and are in high demand, says director of Avtostat agency's press service Azat Timerkhanov. For instance, after 9 months, Lada Vesta has been the most sold car in Russia, though foreign brands owned this title during two previous years.

Lada still remains a No. 1 car in the domestic market (it accounts for 20% of the local market). AvtoVAZ is likely to hold this title for long, Timerkhanov thinks. In addition, the company looks for new markets. So it's back to the Czech Republic and Tunisia this year after a long break. AvtoVAZ has augmented its export by 65% over the nine months. We can't avoid mentioning the reduction in the enterprise's losses accumulated during the crisis, he continues: ''This is why what the officials of the company do can be considered correct.''

Analyst from Otkritie Broker Andrey Kochetkov also agrees with it: ''Without looking at financial indicators, we can say AvtoVAZ remains a leader of the Russian market. Moreover, the new production line has considerably affected the growth in sales. Of course, it's not Fiat but Renault.'' Lada still remains a No. 1 car in the domestic market (it accounts for 20% of the local market). Photo: Maksim Platonov

He considers the enterprise's recovery process is quite successful, though too long. The company is far from generating a stable profit and significantly reducing the debt burden. On the other hand, the growth in revenue and stability in the domestic market allow it to work on increasing the production's effectiveness further on. The new models don't get lost in the market any more, while their localisation constantly grows, which improves the competitiveness amid unprofitable currency rates.

Lada sales have risen by 17% with the market's general growth at 10,6%. Only sales of Kia have grown faster, Kochetkov notes. In the next quarters, AvtoVAZ will have to work on its effectiveness to reach long-awaited profitability, he concludes.