Khabib’s difficult choice: to join show business or stay in UFC and become a legend

Mayweather is alluring: who Nurmagomedov will fight against next time

Due to the scandal of Kokorin and Mamayev, the emotive issue between Khabib and Conor have calmed down very fast without having the time to reach the direct line with Malakhov. However, some time later, Nurmagomedov conquered the information space in sport – now everyone is discussing the next rival of the champion from Dagestan. Realnoe Vremya's correspondent verified a series of rumours and found out four most obvious candidates for a fight against Khabib.

The only undefeated man

If not Khabib's jump out of the octagon immediately after the end of the triumphal fight with McGregor, fans of this sport would also pay attention to the other couple of fighters. Tony Ferguson and Anthony Pettis showed an amazing fight before the appearance of the leading characters of the evening in the ring. But the fight ended earlier that the audience would like. The canvas was flooded with blood after these two, which is logical with those crazy blows the fighters landed on each other. Only Pettis's broken arm stopped this fight in the third round. And who knows how Tony and Anthony would look if the fight lasted till the final gong.

Khabib's fight against ''El Cucuy'', how Ferguson is called, could take place earlier but it failed every time when it came to final events. After the fourth failure, UFC President Dana White even swore off meetings of these fighters. Tony's injury, he tore cruciate ligaments, was the last reason to cancel the fight. However, one shouldn't trust White. In addition, the fighters themselves assured they were ready for the fight. 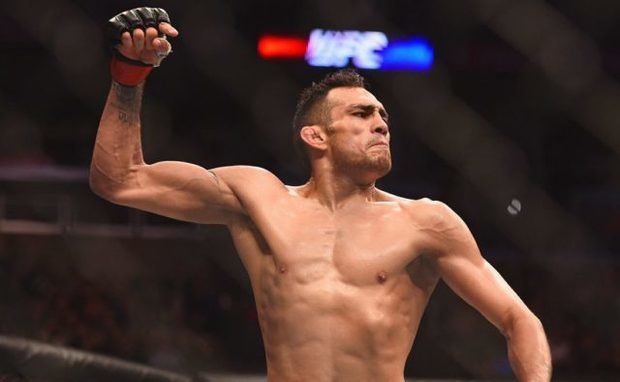 Ferguson said to UFC's press service he was looking forward to this fight, it could be either ''Tiramisu'' (this is how Ferguson calls Nurmagomedov) or ''McNuggets'' (McGregor). They lost their sauce, he does have it now. He must win this fight. Tony said he had a belt in his hotel room, he'd stake everything. Photo: politeka.net

''Ferguson? Now there are two fights who have 11 wins. There is legendary Georges St-Pierre. I can fight with both at any time, in any country. I think Ferguson agrees to fight now,'' Nurmagomedov Sr claimed in an interview in All to Match programme.

Tony replied so coolly that his words can already be considered as a pre-match trash talk:

Ferguson said to UFC's press service he was looking forward to this fight, it could be either ''Tiramisu'' (this is how Ferguson calls Nurmagomedov) or ''McNuggets'' (McGregor). They lost their sauce, he does have it now. He must win this fight. Tony said he had a belt in his hotel room, he'd bet everything.

McGregor has just recently looked like the next most obvious rival of Khabib. But now everything is different. Not Conor is the problem but Nurmagomedov's stubborn character. Khabib's side has repeatedly given to understand he isn't interested in a rematch with the Irish, even if he offered a crazy award. There is a feeling the Dagestani got the maximum at the previous meeting with Conor and doesn't think he's able to fight against McGregor leaving the UFC fair.

But we can't exclude that Conor and Khabib will meet in the octagon again. McGregor's authority and his strong desire to take his revenge can play the key role here. It is no secret that in the UFC the Irish is treated as a demigod justifying his actions and smartly pushing away criticism from him. Under Dana White's protection, Conor can calmly apply for a rematch and is likely to get it. The only unclear thing now is how they will persuade Nurmagomedov. But this doesn't look like a big problem.

McGregor's coach has already begun to beg the organisation for sympathy. According to Kavanagh, it will be hard for Conor to find motivation for other fighters until he has a rematch with the Dagestani. 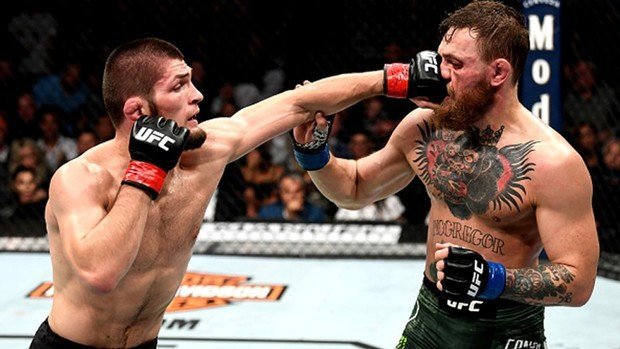 We can't exclude that Conor and Khabib will meet in the octagon again. Photo: newsbeezer.com

''To get that real fire in him — it reminds me when he lost to (Nate) Diaz — that real fire that was in him to get the rematch and train like an animal for it and go in and have his best performance. So if it's going to be that, it has to be Khabib,'' Kavanagh said. The Irish seems to show that in case the UFC denies the challenge, it can lose its most promoted fighter and gold mine.

Nurmagomedov, in turn, can change his decision about the fight. But in this case, McGregor seems to have to open a Pandora's box again, starting trash talks about the topics that seriously hurt Khabib. However, the investigation doesn't fully guarantee that he will be able to insult the family and the religion this time too. The not accomplished mission of his fight with McGregor can be the only motivation for Khabib. Nurmagomedov promised he would take Conor's fans to his side. But he crossed all chances of it out by jumping out of the octagon. A rematch will allow him to do it again. In any case, many people will want to watch the rematch, it promises huge money, while the UFC usually does its best to earn it.

Floyd Mayweather has been more often named among Khabib's possible rivals in recent time. This happened five years ago, it's unlikely someone took it seriously. But everything changed after Floyd's meeting with Conor. Now the world has stirred up again. Though it almost impossible to imagine Khabib boxing or Mayweather fighting in the octagon. But it doesn't impede from evaluating chances for this fight, despite many little understandable moments.

This story has three scripts, each of which deserves careful attention. Firstly, it's clear if the fight takes place, it will be 'to make money', not to evaluate martial arts. In this case, we should remember Khabib's words about his calm attitude to money.

Considering that Nurmagomedov doesn't have defeats under his belt year, there are big doubts that the Dagestani wants to fight against Floyd in the rink. The same thing can be said about Mayweather too who certainly doesn't want to finish his career by defeat in the octagon. But if money (much money) can easily serve as motivation for Floyd, this is not the case of Khabib. It rather looks like an attempt of Nurmagomedov to put pressure on Dana White. Initially, Khabib claimed he wanted to leave the UFC in case his friend Zubaira Tukhugov is disqualified for the incident after the fight against Conor. Afterwards, there appeared a chat with 50 Cent who's linked with Bellator, which is like the UFC. And the rapper was invited to Dagestan to talk with the fighter.

The next step was to declare ''war'' on Floyd Mayweather, that's to say, the refusal of MMA in favour of boxing (it's hard to believe they will fight with Floyd according to other rules). The pressure on White can yield fruits. But nothing similar is likely to happen. And the fight of Tukhugov with Lobov will be cancelled anyway. But it's more interesting what will happen to Khabib next.

Thirdly, challenging Mayweather could imply the direction Nurmagomedov wants to go in. Now he's confirmed his champion's belt, won an undoubted victory over his arch-enemy and ended that evening with a crazy jump into the news feed around the world. But this world doesn't see him as the fighter who explodes the information space only with his appearance, draws the attention of fans and wins big money. Khabib can't like this state of affairs, and to confirm his supremacy he can do whatever, even accept the sure lost boxing match with Mayweather. Another rival for the meeting with whom Khabib will have to leave the comfort zone. Conor's sparring partner Danis Dillon already got an opportunity to fight against Nurmagomedov in the same evening in Las Vegas, and another date in MMA doesn't look like something unreal. However, there is a problem — Dillon competes in Bellator and in another weight category, what, however, can't impede the possible fight.

In addition, Danis has already told how he challenged Khabib several years ago. As a teenager, Dillon used to train in the same gym with Nurmagomedov for some time who often appeared with a lettering on his T-shirt ''If Sambo was easy it would be called Jiu-Jitsu''. This all hurt Danis who specialised in this combat, and he challenged Khabib to a fight, but the latter decided not to pay attention.

Many years later, Dillon has every chance to get the desired fight with Khabib. If earlier nobody needed their fight, now it will cause a huge interest among mixed combat fans. Only a common site and company are needed that will organise this fight where other couples can also be combined. For instance, Tukhugov against Lobov. Why not?