''This may not be the best stimulus, but it works''

Increasing investment level to a quarter of Russia's GDP was one of the goals set by President Vladimir Putin after his inauguration in May. The government is still looking for the ways to perform the task. The latest proposal is to offer special legal and tax preferences for companies to undertake major new investment projects.

The Russian government is leaning on oligarchs to spend $120 billion on new investments by the end of Vladimir Putin's term in order to take overall investment to a quarter of GDP, says Bloomberg. This is another attempt to meet the president's pledges to boost living standards while the economy is pressed down by Western sanctions and cut off from foreign capital and technology.

According to Bloomberg, last month top Kremlin officials discussed a proposal to raise taxes to capture 500 billion rubles ($7,4 billion) in ''excess revenue'' earned by some of Russia's biggest mining, metal and chemical industry players. However, the plan was rejected due to opposition from the business community and partially the government. Thus, the Kremlin proceeded with a gentler approach, such as ''special legal and tax preferences for companies to undertake big new investment projects''. To ensure the success, government officials are meeting with top business executives individually to discuss investment projects. As for companies, they are hoping to get special terms for projects that they were planning to do anyway instead of committing to new spending. 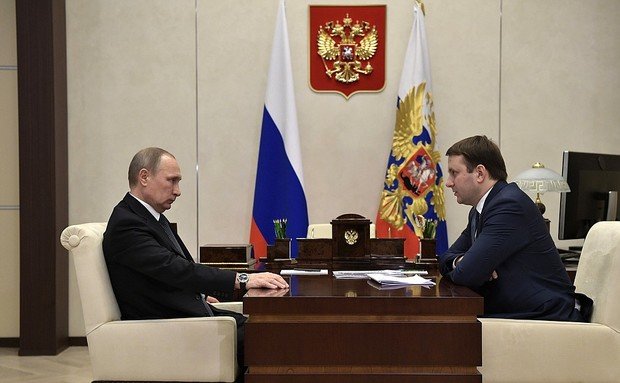 Annual investment needs to grow by 19 trillion rubles by 2024 to meet Putin's target, according to Minister of Economy Maksim Oreshkin. Photo: kremlin.ru

Amid the obscure economic outlook, companies have been cautious about committing new capital. ''Firms are slowing or putting off investments, so all instruments have to be used,'' believes Vladimir Salnikov, deputy director of the Moscow-based Centre for Macroeconomic Analysis and Short-Term Forecasting. ''This may not be the best stimulus, but it works.''

Nonetheless, a sharp increase in investment could leave less money for shareholders, as the bulk of companies' capital spending is usually funded from profits. ''For companies, this means the profitability of their business becomes less predictable,'' said Alfa-Bank's Chief Economist Natalia Orlova, warning that ''compelling companies to invest in specific projects or confiscating sums are things of the same order''.

According to Minister of Economy Maksim Oreshkin, annual investment has to grow by 19 trillion rubles from current levels in the next six years to meet Putin's target for raising its share in GDP. The Kremlin is also counting on state spending on new infrastructure to contribute, along with big state companies. ''The government itself doesn't know yet where to invest,'' considers Valery Mironov, deputy head of the Development Centre at Moscow's Higher School of Economics, adding that the first goal has to be to stimulate economic growth but not investments.