Dreams come true: how much one’s paid at Gazprom and Rosneft

Realnoe Vremya found out how average salaries have changed in the top 10 most expensive Russian companies in the last five years. It turned out they had grown slower in some of them than in the economy, in general, however, not in all of them. Sberbank and Tatneft have relatively modest indicators in absolute numbers, while a salary at Rosneft is almost 19 times higher than an average Russian salary.

An average salary in Russia grew about 1,5 times from 2012 to 2017 – from 26,600 to 39,140 rubles. Average salaries in big corporations were and are still much higher, they are often much higher. Nevertheless, they've grown at a comparable speed, while even slower in some cases. The most modest growth among the 10 most expensive Russian companies was at Surgutneftegaz, while the biggest is at Tatneft. An average salary at Surgutneftegaz PJSC has risen by just 26,95% in the last five years, at Tatneft PJSC, the growth is 5,2 times.

Sberbank is the biggest public company in Russia. As from 29 December 2017, its market price has reached 4,86 trillion rubles (excluding preferred shares). At the same time, an average salary at Sberbank doesn't grow as fast as in the country, in general: in 2012-2017, it's risen by 41,7%. Salaries have increased by far slower at Novatek – by 33,1%, the growth totalled 48,5% at Nornikel. At the same time, average salaries in other top companies have increased even faster. For instance, from 2012 to 2017, they have gone up by 57,9% at Rosneft, 60,8% at Lukoil, 51,2% at Gazprom Neft. Gazprom PJSC and steel workers from Novolipetsk Steel PJSC haven't fallen behind – they've grown by 58,7 and 81,6% respectively.

The salary level is very different in sectors. As a rule, the leaning is in favour of oil workers and gas producers. According to the Russian State Statistics Service, an average salary in this sector was almost twice higher last year than in the economy, in general: it was 74,500 rubles.

It's quite well seen in the example of some companies. Rosneft PJSC workers were paid a totality of 36,7bn rubles in 2017. Each of them got 730,900 rubles a month on average. It's 18,7 times more than an average salary in the economy.

Compared to Rosneft and Lukoil, average salaries at Gazprom PJSC don't look so impressive: in 2017, they totalled 152,100 rubles, which, however, is almost four times more than an average indicator in Russia.

Sberbank was more modest concerning salaries: an average salary is equal to 82,200 rubles. And Tatneft had the lowest salaries in the top 10 companies in 2017 – 61,800 rubles on average. 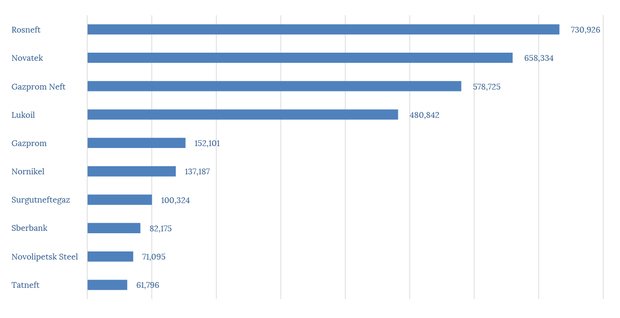 It's interesting that talks about the substitution of human labour for machines still remain talks. In any case, the number of workers seems not to reduce due to the development of technologies. Moreover, the total quantity of staff in the 10 most expensive companies has increased by 16,500 people in the last five years and has reached 458,960 rubles.