The next session of the board of directors of the Bank of Russia, at which the level of the key rate was to be discussed, was going to take place yesterday, on 27 April. The experts surveyed by our newspaper think that there will be taken a pause due to a big number of risks in the rate reduction cycle. At the same time, the experts noticed there was still a chance of a reduction till the end of the year. Realnoe Vremya tells the details.

''The probability of reduction is almost zero''

At the latest session, the Central Bank gave quite an optimistic comment on its decision by directing the market to a further reduction of interest rates. The main issue of this session was whether the Central Bank would change its rhetoric. The intrigue is that whether the regulator will become more careful or continue to cling to the opinion that external shocks are a temporary factor and that, according to inflation's domestic dynamics, the rate has the potential for reduction.

''There will be a pause at this session because not the rate decision but what the Central Bank will say is important. There was an understanding at the latest meeting that the Central Meeting would reduce the interest rate several times more till the end of the year. This is why it's important what they would say on Friday, whether they were ready to shift the rate or there would be a pause, and they would carefully look at inflation dynamics, and then perhaps there would be only one reduction till the end of the year. The main thing what they need to say to the market on Friday was whether they would change their tone to the year or conserve it, while the rate decision wouldn't be discussed. We understand the probability of reduction is almost zero,'' thinks chief economist, head of Alfa-Bank Macroeconomic Analysis Centre Natalia Orlova.

Deputy Director of ACRA group of banking ratings Irina Nosova also claims the key rate will highly likely stay at the previous level. In the expert's opinion, the main reason is that the level of probably tightened sanctions of Western countries and the reaction of our economy are difficult to forecast.

''Three weeks haven't passed yet, it takes more time to clarify the situation – at least some three months. Now the sanctions affect companies of two people only – Deripaska and Vekselberg. Although as for Rusal, there has been information that the company will probably have the sanctions lifted. However, there haven't been such precedents. We will stay tuned for the development of the situation, including in the East,'' said Nosova. Natalia Orlova: ''There was an understanding at the latest meeting that the Central Meeting would reduce the interest rate several times more till the end of the year. This is why it's important what they would say on Friday.'' Photo: Maksim Platonov

''The issue of sanctions and their influence on the ruble rate and, consequently, inflation remains open''

Authors of 'Mislinemisli' Telegram channel also think the key rate is unlikely to be reduced at the next session of the Bank of Russia – too many risks.

''Firstly, the issue of sanctions and their influence on the ruble rate and, consequently, inflation remains open. Both Central Bank representatives and analysts of the regulator told about it in the research Talking Trends. Secondly, inflation risks became noticeably higher, including due to an expected growth of wages. And wages of public workers will rise by 13-15% this year, the minimum wage will also make a noticeable impact. And private sector follows the budget one, unemployment also reduces (this also indicates the problem of a lack of workers and specially qualified personnel, this it's an old structural problem of the Russian economy, which needs to be solved gradually and for long). This is why now the rate won't go down than 7%,'' interlocutors of our newspaper comment.

Authors of the channel think the chances for a reduction of the rate to less than 7% have suddenly reduced in the last weeks. However, the regulator anyway needs to complete the transition to the neutral monetary policy. For this reason, the Central Bank will likely make a decision to increase the neutral key rate to 6,5-7,5% later. This will widen space for manoeuvre and enable the Central Bank to reduce the rate slower than planned.

''If the risks reduce next year (while wage indexation is to fall to the Central Bank's target in 2019), the rate can be quickly decreased to the lowest border of the neutral diapason. In general, nothing changes in plans, though it's not very good news for the economy, of course. Now real rates remain high, and the previous easing monetary policy didn't change this situation a lot. Everything seems to remain so. In other words, loans will remain relatively expensive, while there won't be a serious revival. On the other hand, high real rates attract non-residents' capital, so everything has its own advantages,'' the authors of 'Mislinemisli' Telegram channel conclude. ''Everything seems to remain so. In other words, loans will remain relatively expensive, while there won't be a serious revival. On the other hand, high real rates attract non-residents' capital, so everything has its own advantages,'' the authors of 'Mislinemisli' Telegram channel conclude. Photo: Daria Turtseva

Analytic director at Otkritie bank Dmitry Kharlampiyev, in turn, hopes the key rate will remain at the same level of 7,25% after the session of the Council of Directors of the Russian Central Bank.

''Like before, from a fundamental point of view, the regulator's key rate must reduce, as inflation processes in the Russian Federation slowed down, and the index of consumer prices stabilised next to an all-time low. According to the latest data, +2,3% a year. It's obvious this level (-1,7 pp) is below the target whose topicality has been recently confirmed by an official representative of the Russian Central Bank,'' said Kharlampiyev.

The speaker also noticed that the Russian economy still developed in conditions of the highest real interest rate among big development markets – about 5,0%. Brazil and India (about 3,5-3,8%) are closer to Russia but still fall behind in this indicator. Considering a certain target diapason of the 2-3% real interest rate set by the Russian Central Bank, this fact creates a direct prerequisite to continue the cycle of softening monetary conditions.

''We need to remind that the official comment to the latest session of the Council of Directors contained a direct mention of the regulator's intention to switch from the moderately strict to a neutral monetary policy till the end of the year. However, we shouldn't forget the equal diapason of the real interest rate isn't a constant and can change depending on the sustainability of the country risk premium as well as the level of the neutral external real interest rate. Considering the growth of the Russian risk premium in the last month (in CDS terms) by +50 bp and the possibility of its stabilisation at the levels reached, we can't exclude the so-called neutral diapason of the interest rate itself can go up. If this happens, the potential for a further reduction of the key interest rate of the Russian Central Bank, in turn, will be logically limited,'' thinks the expert.

''If there aren't new considerable external shocks, the key rate is unlikely to be raised''

The analytic director of Otkritie bank also reminds that the situation of financial markets is no less important while making decisions in the sphere of monetary policy, especially in the short term, while the current state of the Russian financial market can be called neither favourable nor balanced. 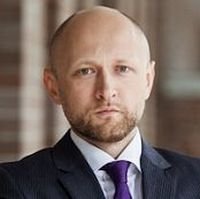 ''Russian financial assets has gone through a stage of large-scale sales in the recent past — RTS Index's fall and the ruble's devaluation against the US dollar locally exceeded 13%, profitability of the public debt in rubles increased by 70 bp. Moreover, the change of the situation happened while oil prices were moving to a local high. Despite some stabilisation of the situation, it's now early to talk about a full recovery or, moreover, continuation of growth of markets. And with the ''external'' nature of negative market movements, we can't completely exclude their repetition in the future, including in the short run,'' comments Dmitry Kharlampiyev.

The expert also pays attention that the extension of the package of sanctions against the Russian Federation by the USA on 6 April became an impulse to launch sales in the Russian market (Rusal and En+ also were sanctioned), then investors illustratively restricted the interest in the Russian market amid the preparation of the USA (and the coalition) for the military operation in Syria. And after it (with a neutral effect for markets, in general), the question of a possible additional escalation of the sanction regime (new sanctions against Russian companies in the context of the Syrian problem) and the character of possible return moves of Russian authorities came forward. Although, according to the latest data, the USA at least took a pause concerning the imposition of additional sanctions, while the discussion of the package of counter-sanctions in the Russian Federation will continue during the month.

''So we wait for a pause in the regulator's key rate reduction cycle. And the issue of its renewal in the middle term and possibility of a reconsideration of the neutral diapason of the rate remains open. However, if there aren't new considerable external shocks, we don't consider the scenario of a higher key rate and beginning of monetary interventions (sale of foreign currency) by the regulator as realistic,'' Kharlampiyev concludes.