Tatarstan sets the pace in the country in youth and sports policy. Moreover, society demands their development. The last year brought the republic many world sports competitions, 2018 won't be an exception. The Football World Cup is one of the most expected events but not the only area the ministry works on. Realnoe Vremya found out how 2017 was for the relative ministry and what plans it has for 2018.

Brands for the youth

Minister on Youth Affairs and Sport of the Republic of Tatarstan Vladimir Leonov opened the final meeting with announcing financial indicators. Over 10 billion rubles were spent from the regional budget. In addition, more than 200 million rubles were made thanks to fee-based services. The growth has been almost 10% in comparison with 2016. All key indicators were reached in the sector. The minister paid great attention to new numbers of salary.

The hall unwillingly reacted to this statement with applause. The ministry went ahead not only in the economy but in its direct areas. For instance, according to data of the Public Chamber of the Russian Federation, 84% of young people in Tatarstan are satisfied with youth policy, 75% constantly participate in it. The indicator is the best across the country. The active civil position of young residents of Tatarstan is noticeable in victories on many platforms: Volunteer of the Year, Student of the Year, 21 st-century Leader contests. The republic not only transmits its experience to other regions through its own active youth but also attracts it from other regions. Tatarstan forums – Selet, Volunteers' Forum – gain in popularity. Representatives of 78 regions of Russia and 63 countries took part in the regional meetings in 2017. In the country, Tatarstan holds leading positions in developing the youth infrastructure. Camps and clubs for teenagers belong to it. Over 60% of all facilities have been repaired in the last 4 years, the action of the programme has already been prolonged. Despite this, there are growth points: new youth brands need to be created and promoted, a more active profile job is needed to be done, it's necessary to develop youth public organisations through co-working centres. Chairwoman of the Youth Government of the Republic of Tatarstan Dina Gaizatullina agreed in her report later that special centres where the young generation could exchange idea lacked. By the way, to a certain degree, the young government can be called one of the brands that Vladimir Leonov wants to develop. This organisation fulfilled 25 projects in 2017, nine people were employed.

Last year, Tatarstan conserved status of one of the leaders in sport in the country. Successes in elite sport were noted by the minister on youth affairs and sport of the Republic of Tatarstan.

''Successes of Tatarstan athletes in the biggest international competitions are a cause for special pride. We won 51 medals, 23 of them are gold. The number of homebred athletes grows year after year. In 2017, the amount of those who are in Olympic national teams of Russia increased to 370. Now eight athletes are on the long list for participation in the Winter Olympics in Korea,'' Vladimir Leonov said proudly.

But it's not the only area of the regional sports ministry. A lot of attention is paid to the mass sport, the network of sports facilities exceeds 10,000, their number became 256 more only last year. The capacity is over 60%, which is higher than the all-Russian level. A regional programme on the construction of universal sports venues continued last year. Thanks to it, another 120 facilities and 11 module ski bases appeared. Construction of another 86 universal sports facilities and 16 ski bases are scheduled for this year. Such attention yields fruits. Head of Almetyevsk District Ayrat Khairullin put an example that can inspire all districts. Photo: prav.tatarstan.ru

''The percentage of people who systematically do physical culture and sport rose to 43,5%, which is 1,5 million Tatarstan residents. The republic is already ahead of target indicators of the federal programme. It is planned to attract a half of the population of Tatarstan to the sport by 2020,'' Vladimir Leonov optimistically hopes.

Head of Almetyevsk District Ayrat Khairullin put an example that can inspire all districts. The municipality is first in the republic in the organisation of sport and health promotion among the population.

''In 2017, we achieved a 3% growth of those who regularly do sport. The number always was 1%. Most importantly, mortality of workable population reduced by 30%. I didn't make a mistake,'' Ayrat Khairullin drew the attention.

Although it's not always easy to do it. Vladimir Leonov drew the attention of Tatarstan Prime Minister Aleksey Pesoshin to the fact that the ministry's budget hadn't been indexed since 2005 and asked to solve the problem. Moreover, the document is ready.

The GTO system (a physical culture training programme) additionally attracts the population to the sport. But not everything looks smooth here. Head of the Department on GTO All-Russian Physical and Cultural Complex Introduction Aleksandr Karpov doesn't understand why 55% of those who have already registered on the site for testing haven't reached it. The indicator for advanced Tatarstan is too big. So the number of people with GTO pins would be bigger. Now Tatarstan is fifth in the country in this indicator. Maybe because there is a lack of specialists?

''Jobs in test centres are needed. Nowadays there are 40,000 people per one Tatarstan employee a year, while their number in Ulyanovsk Oblast is 7,000,'' Aleksandr Karpov gave an example. 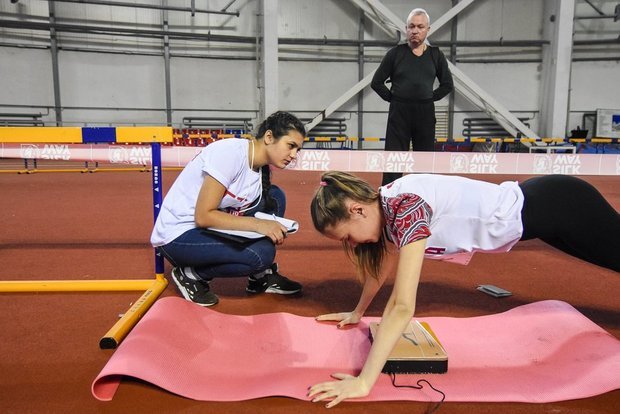 55% of those who have already registered on the site for testing haven't reached it. Photo: Oleg Tikhonov

Federal guests expressed the republic their gratitude for the systematic work. Deputy Head of the Federal Agency for Youth Affairs Roman Kamayev noted the legal base in sports. Many Tatarstan documents are copied in other regions, which means they are well thought out. Deputy Sports Minister of Russia Natalia Parshikova added that Kazan set new approaches, while Tatarstan was an example in all issues. We can only wait for the Football World Cup, the key sports event in 2018.

The people who gathered there didn't have remarks about the plans of the Ministry on Youth Affairs and Sport of Tatarstan for this year.

''To sum up, we need to note that we saved the positive dynamics in the economy, the tendency for economic activity. All social projects were fulfilled in 2017, all regional programmes aimed at increasing the quality of life were fully completed. The ministry did a huge job on fulfilling Vladimir Putin's May decrees. We will solve the defined problems routinely,'' Tatarstan Prime Minister Aleksey Pesoshin said.