Vagan Martirosyan, TryFit: ''We found the Tatars’ feet were different from Slavic''

Being on a ski slope in uncomfortable boots, Vagan Martirosyan made up a virtual shoe fitting service that enables to choose a pair of shoes faultlessly. With engineering education and a start-up with analogous dressing room behind, the task seemed to him possible. This is how TryFit appeared that is going through a pilot test in Russian Decathlon and has negotiations on being used in New Balance, Adidas. The founder of the project told Realnoe Vremya about the chances of going ahead of three world opponents in its segment.

''We create a mathematical design of wearing shoes''

Vagan, how did you decide to create TryFit?

Two facts motivated me. Firstly, before TryFit, I had a start-up with a 3D virtual dressing room (Editor's Note: Dressformer). Consequently, I have quite good experience. The second fact is that I love shoes, I often buy them and personally faced a problem when snowboard boots rubbed my feet on a slope, though they were comfortable in the fitting room. It turns out many people face such a problem: when we run, jump, exercise, feet widen or become longer – they deform.

But scanners already existed before you and they are already applied by retailers.

Yes, we have rivals but we're not unique thanks to the scanners. Our rivals only calculate the length, width and several other parameters, after which a seller should decide which model will fit the purchaser. Apart from scanning, our service creates recommendations on shoe size that is needed while moving (while walking, physical exercise). The rivals don't do this. We create a mathematical design of wearing shoes, define all parameters of the leg till the knee (thanks to it, boots or ski boots can be selected) and make a conclusion which shoes will fit you and the shoes' comfort level by calculating the fit rate. It's our invention. 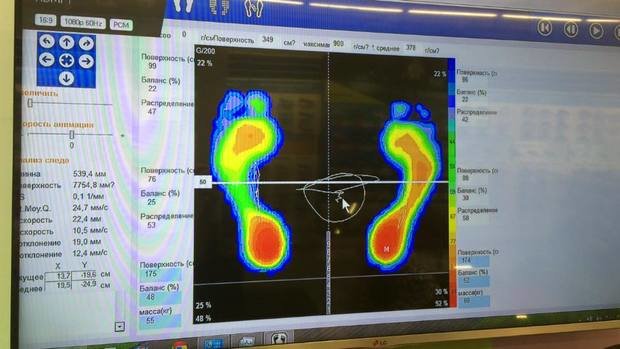 How does it work? The TryFit scanner is a flat platform with vertical ribs about half a metre in height (till a person's knee level). The user stands on the platform without shoes, the operator launches the programme on his device, and the foot and the leg till the knee are scanned during 10-15 seconds. Then the operator's device shows everything about the full size of both feet, their length, seven circumferences at different points. Having installed the application on the phone, the user sees all physiological parameters of his foot and an offer of retail partners of TryFit with a fit rate of every pair of shoes for these individual characteristics.


How much did you invest in TryFit?

In the beginning, few investments were needed. About €50,000 was my personal contribution, the total investments are equal to some €80,000. And we additionally attracted another €800,000 during two years.

You have a platform in Innopolis and Skolkovo. What's their role?

The Development Center is based in Tatarstan in Innopolis. The second one is in Skolkovo. The sales department is in Moscow, I actively deal with sales and I am almost always there. My role is to attract investments. To work with foreign companies, we have an Irish office – due to the current geopolitical situation, foreign partners don't have a very good opinion of the Russian origin of companies. Pulsar Venture Capital (Editor's Note: a Tatarstan venture company and the Investment and Venture Fund of the Republic of Tatarstan are one of the investors of TryFit. 1C company is another big investor of the start-up.) advised us to export our services to the foreign market via Dublin.

Do you try not to advertise your Russian origin?

No, we do advertise it. We say we have Russian engineers and mathematicians – it is all evaluated. But they want to sign agreements within the British law, that's to say, it just protection of juridical risks. We actively cooperate abroad with French Decathlon whose sales volume is €10 million, Intersport, New Balance. Now we launched the project in Singapore.

How difficult is it to copy your model?

Probably it isn't difficult to copy the hardware – to put a scanner, cameras to the body. But the product has a series of other tasks that need to be solved. Particularly, the camera sees everything from one angle, the data from all cameras need to be in one coordinate system, there are many failures that need to be eliminated, etc. This product has lots of math, which isn't easy to copy. It seems to me the start-up is always at risk. But we think we are considerably stronger in comparison with existing rivals (they are three in the world: Swedish, German and Dutch), though we started 2-3 years later. We caught up and overtook. They can catch up with us, of course – just because they have more money. But we're also on the go. We deliberately go to the place where we have our rivals to show we're not afraid, our math is more powerful and costs us five times cheaper. The German rival works with Adidas, we went there and launched a Swedish pilot project with New Balance. But one can be on the rivals' heels if you are one step ahead of them. We will look at the result.

''It's important for us to collect all Tatar lasts''

What feedback do you receive from retailers after pilot projects?

Very good. 80% of test participants in one of the chains (company employees) told their confidence in sales would go up if they had our app. All people are different, feet are different, but nobody considers it. When we presented our observations to big companies we have negotiations with, Decathlon, in particular, they just grasped us

How much time will it take from testing until signing an agreement? I suspect that bureaucracy in corporations is incredible.

Yes, they will think for a very long time. But everything depends on management. 6 months passed in New Balance from the first talk to the start of the pilot project. We test for several months and they will think of using TryFit for other several months. With such a company as Decathlon, we launched a pilot for three weeks. They liked everything so much that they invited us to Lille, to France. I went, met with their top managers, we discussed the possibility of expansion of the successful Russian experience to other countries of Europe starting with France.

You don't sell scanners but give them to chains for free. What are you making money from now? What about the future?

A fee is our business model, 5% of sales. We plan to earn on fees further on.

At the presentation, you said you sold your device to Singapore. Is it an untypical story?

What they wanted is to buy. We sold them the system for €30,000. It is three scanners with a licenсe, support, training. But the sale is not the foundation for our business model. They bought the scanner. And, in fact, they were to get all foot scanners. But we agreed that even if they bought the scanners, feet were ours anyway. Our task is to collect as many as possible. Feet feed us.

Why? Are you going to sell this data to shoe makers?

Yes, they could make more comfortable lasts based on the data. And we can do it with regional specifications. Asian feet are different from Slavic, Slavic feet are different from Caucasian. All people are different, feet are different, but nobody considers it. When we presented our observations to big companies we have negotiations with, Decathlon, in particular, they just grasped us. They were afraid of giving their lasts to us but now they say: ''Please, take, only say to us how to improve them'. We found quite an interesting fact that the Tatars' feet were different from Slavic. Collecting scans of Tatarstan residents' feet, we can formulate requirements for lasts that will be more comfortable for the republic's residents. We can also make Tatarstan leader of online sale of shoes in the world, especially if we're supported to develop production capacities. We would manage to scan the majority of feet within a year.

It's not difficult to find just money

It's said at your presentation you will be in in the black in 2019. Are the evaluations real?

We are really to be in the black in 2019 in terms of investment costs. As for operational costs, we are to have money in late 2018 already (in September-October).

You told that TryFit needed 140 million rubles. What do you need the investments for at the current stage?

Mainly to solve two tasks. To develop production because the prime cost of one scanner isn't low – €2,500-3,000 depending on the complete set. The investment model is simple. We're estimated at €8 million already by the market. The value will increase more from the next year, which turns on the attraction of new clients. We can also make Tatarstan leader of online sale of shoes in the world, especially if we're supported to develop production capacities

We are interested in both. Most importantly, they need to have a right profile and be able to give something apart from money. Expertise, exit to new brands and markets, support of our other initiatives. It's not difficult to find just money. For instance, Pulsar is interesting for us as an investor because it understands the system well and it is able to deliver us to western and eastern markets. The Investment and Venture Fund of the Republic of Tatarstan is also interesting, we won its '50 Best Ideas' competition. They also invested in us.

Do consider an option of selling the company to same Decathlon or another producer?

Yes, right this option is interesting for us. Or a big brand or retailer like Amazon, Alibaba or Rokuten. We already have negotiations with them, particularly with Rokuten. And they are interested in technologies like ours. They have experience in sales, they already purchased a company with online dressing room. They can purchase a shoe fitting start-up.

What is the price you're ready to sell your start-up for?

I'm not ready to say accurately but certainly tens of millions of euro.