The head of a game developing company tells about development of the industry, the place of his company in the billion market and an application for the Tatar language

''Soon there will be nothing — just virtual reality.'' This too arbitrary assumption, it seems, doesn't bewilder at all the founder and director of the company GD Forge, Yan Shevchenko. He is waiting for VR to become affordable, and for now he is running his own rock-and-roll business in the field of game development for business and entertainment. Like any ambitious game developer, he plans to gain world recognition and to take his place in the billion industry, which has already surpassed cinema and music business. Read more in the article of Realnoe Vremya.

Playing up to clients

The company GD Forge made its first profit three years ago, it reinvested — bought a MacBook for the team, which at that time consisted of four people. In fact, it was necessary in order to implement its first order — a training app for English numerals ordered by a teacher. He needed it developed for two platforms: iOS and Android. Perhaps, if this order did not exist, it should have been come up with.

''We were also surprised by the order. But you shouldn't think that it was a huge amount of money. We bought not a new Mac but used one from a pawn shop,'' says Nelly Labunskaya, CEO of the company. She is the main ally of the founder of the company, Yan Shevchenko. They call GD Forge a 'family business'.

The next milestone was a game order, it was private too, and then developing a big gaming app Aeroigra for Aeroflot airline, on which GD Forge worked together with the agency Arena. After that, it became clear that there was a demand.

Over three years of its existence, the company has reached a turnover of 29 million rubles and become one of the Kazan companies that develops computer games to order, there are few such companies in Russia, Yan Shevchenko says. The team writes programmes for any platforms. It is games, gamification elements for websites and applications for corporate customers, and visualization for virtual reality (VR). Nelly Labunskaya is the main ally of the founder of the company, Yan Shevchenko. They call GD Forge a 'family business'

One third of GD Forge customers are private companies. They perceive GD Forge as an outsource team that realizes the dream of gamers about own game, where they can even earn. The main bulk of clients is corporate sector: one third is from Tatarstan, about 20% is from abroad.

''At some point, business realized that the game is a powerful tool to motivate a customer or employee to do something. Look at the feedback section of a website of a decent company, it is very detailed and expensive. Here, the user will always be told 'Thank you!' at the right moment, 'Congratulations!', and also — 'You're the best, thank you for the phone number!' They are ready to cheer and encourage you to ferret out information, which is a huge value for them. It is gamification for the end customer. But it is also widely used for internal customer, in particular, during training,'' says Yan Shevchenko. ''Gamification allows to get a new experience in a game. It may be something that cannot be experienced by any other way (flight to the Sun) as well as gaining a new skill. This is very popular in the industry because in order a person was allowed to serious equipment, he or she should train on complex simulators. The market of such simulators is very serious. But virtual reality is much cheaper and easier.

Meanwhile, gamers continue to develop the market of games and gamification.

''Four years ago, the game industry overtook by turnover the cinema and music business combined – it is $109 billion. Though Russian market is lagging behind global one by about two years, but it is also growing. According to the latest reports of Mail.ru Group, the game direction brings the lion's share of turnover. After all, a video adapter, which every computer has, was developed not to become raw material for bitcoin but to give a more impressive image for games,'' the speaker says.

The industry in general resembles the film industry, where there are 'studios', 'producers' and 'distributors' — each chooses their role. Shevchenko chose a rock-and-roll approach to business — it is how he calls it.

''There is a company, whose path appeals to me. It's Quantic Dream, and we are similar in something. It is the largest motion capture studio, they make money on these developments, and they spend these money on what they like themselves,'' Shevchenko tells. Over three years of existence, the company has reached a turnover of 29 million rubles and become one of the Kazan companies that develops computer games to order

Following the same principle, GD Forge implements orders to third-party clients strictly according to technical specification, and 30% of the profits from these orders directs on own projects, with which they plan to acquire fame and recognition in the world. Today they are having 17 own projects being under development. At the beginning of next year, it is planned a release of the game Protocol in the shops of mobile games Steam and ATATA.

''Outsource development is only a mean to an end. We want to learn how to sell games, to monetize, to find a formula of success of such projects. It is an ambitious task because the cost of developing games is very high,'' Shevchenko said.

One of the projects in the studio development is a game for learning the Tatar language, which then can be scaled up and applied to the study of other languages of minor indigenous peoples. The first game will be released in a couple of months, in the future plans — a whole educational platform.

The cost of game developing is high because there are high costs of salary fund, but software takes much time to write. The whole team of GD Forge consists of 43 people who are able to conduct up to 18 projects simultaneously.

''The game is a very complex product. It is more difficult to make it than a regular messenger. It's almost the same as making a film,'' Yan Shevchenko compares. 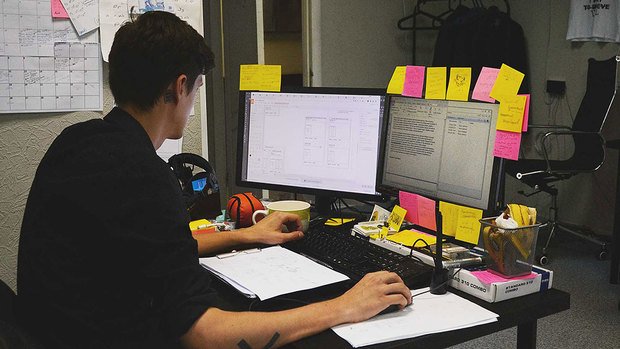 The cost of game developing is high because there are high costs of salary fund, and software developemnt takes much time

Risks could be reduced if working with publishers. This cooperation gives an opportunity to scale up a project to unlimited sizes. But GD Forge does not want to choose such model because then they would have to work in other people's boundaries and experience the censorship of producers. Shevchenko knows firsthand how it happens — he had such experience before he created his own company.

Anyway, collaboration with publishers, the largest of which are Mail.ru, Alawar, Gaijin Entertainment, has purely pragmatic sides, Shevchenko recognizes. Moreover, many developers dream to find their own publisher.

First, it can bring great financial benefit. Second, with this collaboration, the game is likely to be provided with a good distribution because publishers usually has their own resource or store, where they can realize the game. The publisher is likely to take exclusive rights for the product and from 40 to 60% of the profits, but often it is about return investments.

In any case, it is always unilateral control from the side of producer, says Shevchenko, but his team want creative freedom.

''Vanity? Of course!'' agrees Yan Shevchenko. ''Games development is a rock-n-roll in the world of IT. We want to take a standing ovation, to make a cool game, but if something does not work, go offended and yelling that nobody understands us. Again, this is very similar to the film and music industries.'' Games development is a rock-n-roll in the world of IT. We want to take a standing ovation, to make a cool game, but if something does not work, go offended and yelling that nobody understands us

But despite the dream, Shevchenko is definitely not going to refuse from outsourcing. Already now he divided the areas of work of the company for two brands. GD-Forge takes the projects to order, and Fair Games Studio develops its own products. This ensures stability of the business.

VR is not a self-indulgence

In the market of game developing and software for virtual reality helmets, GD Forge competes with companies that specializes on VR. But Yan Shevchenko believes his company to be more competitive.

''I always think that in order to create games for VR it is better to turn to a game studio because they work with 'delicate matters' such as excitement, pleasure, engagement. When you develop just an IT product, it has one, purely functional, aim — to solve the problem. The game has the aims to captivate and entertain. The teams of game developers always have a game director who understands the processes, the intricacies of psychology: how to keep the player's attention, how to make someone to empathize, how to motivate people to get back in the game, to buy something. The hype around virtual reality has passed, but not because the technology was disappointing but because the hype has been replaced by strong demand, Shevchenko believes

Yan Shevchenko is optimistic about the development of the market of virtual reality from both a business point of view and from a businessman-romantic one.