Kazan 2035: Barcelona on Volga, E-Island and Kaban project from China

Participants of 'Architecture and Development of Russian Cities' session, which took place in Innopolis, knew why young architects should not look at the experience of Moscow and Europe while constructing facilities out in the sticks and how Kazan did not follow the trend of hipster urbanism. Realnoe Vremya tells the details.

''When you try to build Holland architecture in a region with the help of a Moscow architect, Frankenstein becomes the result''

Addressing the audience, which consisted of mainly young architects, architect from Tver Nikita Malikov stated from the beginning he was a countrified architect and it was his business gimmick. Nikita doesn't work in Moscow as a matter of principle.

All young architects dream of building a super project in the centre of the capital, make huge money from it and have an architect's bohemian lifestyle. In fact, this can happen to one of all the people who were in this building, God willing, the head of his own architect bureau believes.

This is why Nikita Malikov doesn't work with regions and has projects in 11 cities of Russia. Young architects think how to start working, where to go. For this reason, Malikov decided to push them in the right direction and told about architecture outside the capitals.

According to him, young architects are ready to work as visualisers, interior designers, deal with big projects in Moscow or Europe. Working as an architect in their native city doesn't attract them. University graduates try to go to Strelka KB in the capital, create cool projects there and get a lot of money. But they don't know that they will perfect their mastery in big projects there like a machine. And, as a result, the signature of an architect from the top 30 of Russia will be put to these projects, and nobody will know about this young author. This is why Nikita Malikov doesn't work with regions and has projects in 11 cities of Russia. Photo: malikovnikita.com

''But if you come to a region and do the same job, you will become a star just because you did something different in the region,'' the architect is sure. Of course, it is possible that developers won't understand the non-standard decisions, Malikov warns. He surveyed developers whom he asked why they did not work with good young architects. The majority of developers think that young architects know nothing, developers often try to dictate the architect their own tasks. He put an example of one of such technical tasks:

''Hi Nikita! I was on holiday in Amsterdam and took photos of many houses. I want you to draw the same for me!''

In the expert's opinion, the main problem of modern rural architecture is that the mentality of developers and architects have a stable stereotype – all money and all architecture are concentrated only in two cities of Russia. This is why when developers want to build something interesting, they turn to Moscow or Holland architectural bureaus. But the regional market is not ready for the knowledge given at European architect schools. It will never be able to play by Moscow rules. And very rural architects don't have the methodological understanding in order to create architectural facilities in regions now.

''Understand, all you can do now is to create your own methodologies. Don't try to copy Moscow that also partially copies Europe. When you try to build Holland architecture in a region with the help of a Moscow architect, Frankenstein becomes the result. Start with Soviet books. When the metro was built after Stalin's death, it was the time of a fight against architectural extravagance. Architects thought how to make metro stations more or less pleasant. And they decided to lay the golden ratio principle to their construction foundation. Yes, the architects who worked in this period did not make masterpieces. But today these stations look to be of quality because a principle was laid in the foundation,'' architectural bureau director Nikita Malikov instructed the young architects.

Participants of the case session know how architecture developed in the backwoods by the example of Kazan. Deputy head architect of Kazan Timur Kadyrov told that the General Plan of Kazan until 2025, which was established in 2007, did not have such events as the Universiade, the transport infrastructure for such events was not thought out, the construction of new venues was not taken into account. This is why it is the time to create a new general plan. The Genplan Institute of Moscow has been dealing with it since 2014. It is planned to establish a new General Plan of Kazan until 2035. 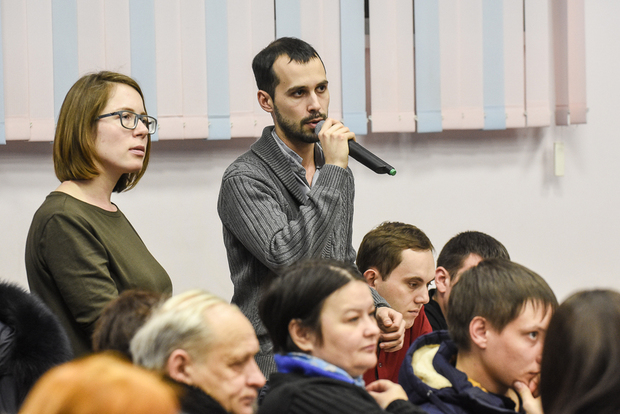 The principle of creation of a comfortable and small city was founded in the basis of Kazan's development concept, Timur Kadyrov says. Photo: Oleg Tikhonov

While creating the general plan, the Moscow Research and Project Institute used an American transport pattern. In addition, data of mobile providers on citizens' movement, field research when the laboratory visited roads and checked results of transport traffic were considered. In other words, the further development of the city was created taking transport development into account. A united centre was created for this purpose – Transport Planning Bureau in the Kazangrazhdanproject Institute. The bureau's tasks will be to provide updated transport miniature, monitor the general plan and projects of integrated development of territories. Timur Kadyrov told about the first results of such monitoring. An integrated development scheme of bicycle network is one of the examples. ''This trend started to be less popular. But we did not rush to follow the trend or develop hipster urbanism,'' the deputy head architect of Kazan set the goal of monitoring. ''There was a certain task to create a city. The scheme considers all bicycle lanes that were included in the general plan or integrated scheme of traffic management. Having overlaid these links, we understood they did not coincide. Every institute designs bicycle routes as it thinks to be important, without considering the environment.''

The principle of creation of a comfortable and small city was included in the basis of Kazan's development concept. It is clear that it is unlikely to be possible to create a new centre because the existing historical centre of Tatarstan's capital will draw the main historical, cultural, educational and administrative meaning. Nevertheless, new financial and production small centres are to appear.

Kazan Financial Centre is due to become one of such financial centres in the New Tatar Settlement. Today this territory is not far from the river port. It is developed from a perspective of industry, warehouses, the functionary said…

''This territory can be compared to the case of Barcelona before 1992 when nobody knew the city and went there,'' Timur Kadyrov made an unexpected comparison. ''The project on creation of a master plan of this district began two years ago. Malaysian developer – APUDG concern – was chosen. The goal was to create a business plan that would enable to show foreign investors possibilities of this district. The main idea of the project is to develop the financial centre on the Volga riverbank.'' 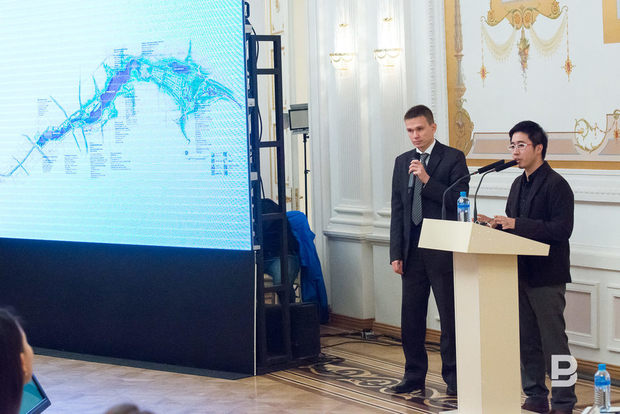 Nizhny Kaban Lake is another project. It was created by Chinese Turenscape company. It presupposes improvement and creation of a comfortable environment of not only embankments but also neighbouring territories. Photo: Maksim Platonov

The deputy head architect of Kazan mentioned several main parameters of the Kazan financial district. The total area will be over 1,100 ha, of which 656 ha are the building's territory. The concept developers predict that about 43,000 people will live in the financial district in 30 years, there will be created 18,700 working places. The project presupposes construction of 5,6 km of new roads and modernisation of 20,5 km of existing roads.

Admiralty Settlement is another approved project of integrated development of the Kazan territory. Today the former factory of Kazan Helicopters is located there, there is a lower quality dwelling. According to the project, which was created by SPEECH architectural bureau of famous Moscow architect Sergey Choban, a museum of the Admiralty Shipyard, 5-7 storeyed blocks of flats and anchor facilities that will be seen from the Volga embankment are to appear in the settlement.

Nizhny Kaban Lake is another project. It was created by Chinese Turenscape company. It presupposes improvement and creation of a comfortable environment of not only embankments but also neighbouring territories. The project includes reorganisation of the transport system, development of bicycle traffic and pedestrian precincts.

2017 was announced in Tatarstan as The Year of Public Spaces. An improvement project of the Gorky-Ometyevo Forest was fulfilled within the programme. Now the second part of the project is accomplished, there will be a third one.

''It is a very important project for us that is at the initial stage – Kazanka Valley. Together with ecologists, we create the development project of this territory. Here we plan to create three types of embankments – bitumen like the Kremlin Embankment, with improved riverbanks and as natural as possible with people's maximum impact,'' the deputy head architect of Kazan said. 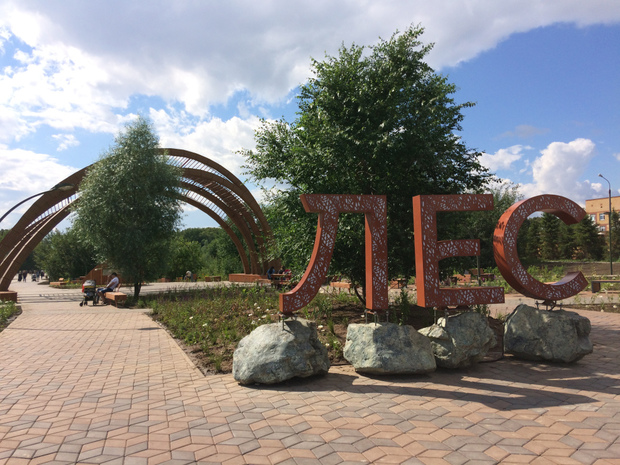 An improvement project of the Gorky-Ometyevo Forest was fulfilled during The Year of Public Spaces. Photo: Ruslan Khasanov (airofcity.com)

The development project of the territory around the Kazan Federal University is called Comfortable City. It started with the improvement of the garden behind the university. ''The university planned to locate parking there, started to saw trees and lay asphalt. But a request for this project appeared thanks to local activists and Natalia Fishman,'' Timur Kadyrov could not help but remember the main ideologist of the improvement of parks and squares of Kazan.

Kazan architect Nikolay Novikov created the concept of Comfortable City. Creation of a creative group in the City Administration of Kazan is linked with this project. The project presupposes improvement and installation of a security system – CCTV cameras, emergency call button. It also includes installation of electronic screens with information about navigation of tourists and city's history. The first such an island will be equipped at the crossroads of Pushkina and Professor Nuzhin streets.